The Friedrich Naumann Foundation for Freedom (FNF) is calling for nomination and participants to this seminar, deadline of application on April 11, this Friday. 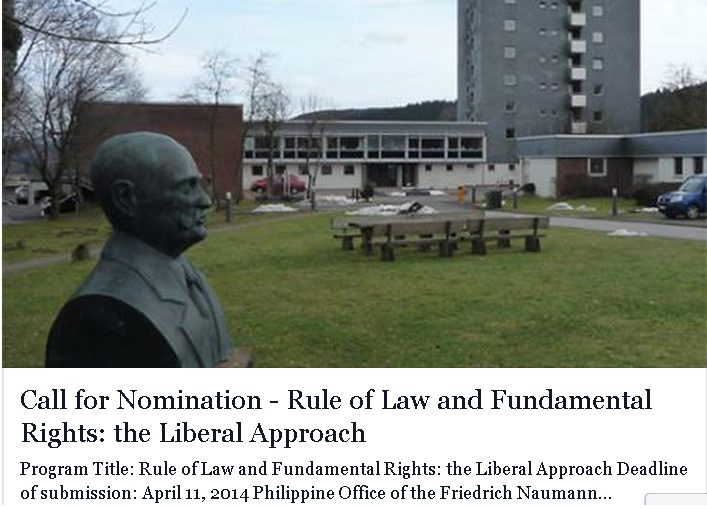 The application and elimination process before one can be accepted to the actual seminar in Gummersbach (near Cologne), Germany is two-stage. First, FNF Philippine Office will shortlist from among the many applicants, get only about five or so, and the selected ones will participate in an online discussion involving perhaps a hundred people from different countries and continents, to be moderated by German liberal facilitators. After about three weeks of online discussion, the facilitators will choose only 24. These guys will travel to Germany for a one-week intensive (morning till evening sometimes) seminar, including a field trip to Cologne, visit several offices and political leaders there. At least that's how it was done six years ago. I think it's the same process until now.

During the online discussion, the participants are from Asia, Africa, S. America and E. Europe. It is a good learning process itself, so that even if one is not accepted in the actual seminar in Germany, one has learned a lot already from the reading materials given by the facilitators, and from the actual discourse with fellow participants.

I attended the seminar on "Local Government and Civil Society" in October 2008. I was lucky to be admitted to the actual seminar in Gummersbach, 8 days including 1-day field trip in Cologne. There are participants from all 4 continents. The Latinos could not speak English, there is a translator (English-Spanish) throughout the course. My experience in that seminar with photos,
IAF Seminar 2008, Gummersbach, Germany, January 21, 2011
IAF Seminar, Gummersbach, Germany, Part 2, October 13, 2013.

Stefan Melnik, a former FNF officer, suggested that good introductions to the concept of rule of law and its necessity are (1) Hayek's The Constitution of Liberty, and( 2) Tom Bingham's Rule of Law.

It's a good suggestion. Here is a portion of what Hayek wrote about the rule of law:

Law in its ideal form might be described as a ‘once-and-for-all’ command that is directed to unknown people and that is abstracted from all particular circumstances of time and place and refers only to such conditions as may occur anywhere and at any time…. “By ‘law’ we mean the general rules that apply equally to everybody… As a true law should not name any particulars, so it should especially not single out any specific persons or group of persons. -- F. Hayek, Chapter 10, "Law, Commands and Order", The Constitution of Liberty (1960). See: Hayek 7: Rule of law means no exception.

There is a suggestion that the PNoy government has violated the rule of law in the impeachment of former SC Chief Justice Renato Corona.

I think ALL government administrations in the PH, many other countries, selectively violate the rule of law. "general rules that apply equally to everybody", no one is exempted and no one can grant an exemption. Stealing is stealing, whether the theft is the King or President or Prime Minister or the Mayor or the poorest man on Earth. The fact that stealing and plunder happening in all administrations means that in most cases, rule of men, not rule of law, is the norm.

Stefan further suggested that “the FNF focuses on the term rule of law as internationally understood- because the term Rechtsstaat has a slightly broader meaning. To use the latter in a foreign domestic context would confuse people, given the legal environments in which they live. Briefly, the German concept includes basic rights whereas "rule of law" implies and protects such rights but does not include them. For instance, equality under the law implies a right to equal treatment and demands that this is what the legal system does.”
-----------

Posted by Bienvenido Oplas Jr at 1:49 AM