Last October 22, 2013, I and some Asian friends in the free market network met with our friends at the Americans for Tax Reforms (ATR), after EFN Asia 2014 Conference ended in Bangkok. The meeting was held in another hotel not far from the venue of the EFN Conference.

Sitting from left: Roman Dannug of DLSU (Philippines), Peter Wong of Lion Rock Institute (HK), Mao Shoulong of Renmin Univ. (China), Chris Butler of ATR. I forget the names of the other three on the right, sorry. Photo from IDEAS. 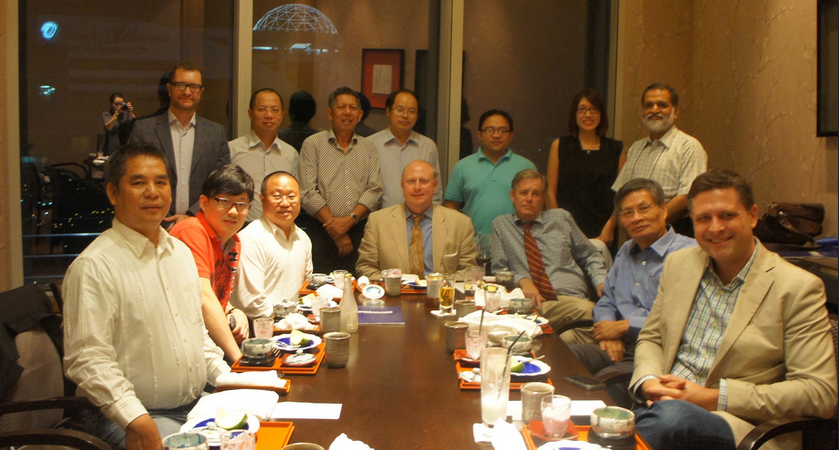 It was an exploratory meeting how we can possibly put up a regional think tank focused on tax issues -- campaign to have low, simple taxes among countries in the ASEAN region and other Asian economies.

Good initiative, but we have not done any serious project yet after that meeting. When the ASEAN Economic Community (AEC) will materialize by January 2016, lots of "harmonization" of policies will happen among the 10 member-countries of the association. This project then should have some bones and skin then after this exploratory meeting.

Meanwhile, I got this poem last October from the Bastiat Institute facebook page. Cool, reposting it.


Tax his land, Tax his bed,
Tax the table, At which he's fed.

Tax his tractor, Tax his mule,
Teach him taxes, Are the rule.

Tax his work, Tax his pay,
He works for peanuts anyway!

Tax his cow, Tax his goat,
Tax his pants, Tax his coat.

Tax his ties, Tax his shirt,
Tax his work, Tax his dirt.

Tax his tobacco, Tax his drink,
Tax him if he Tries to think.

Tax his cigars, Tax his beers,
If he cries Tax his tears.

Tax his car, Tax his gas,
Find other ways To tax his ass.

Tax all he has Then let him know
That you won't be done Till he has no dough.

When he screams and hollers; Then tax him some more,
Tax him till He's good and sore.

Then tax his coffin, Tax his grave,
Tax the sod in Which he's laid...

Put these words Upon his tomb,
'Taxes drove me to my doom...'