A good artice from my former teacher at UP School of Economics. The italics-red highights are mine, meaning I like them. The italics-blue highlights after the article are observations that I am skeptical or disagree with. Enjoy.
------------


Power and the pursuit of equity 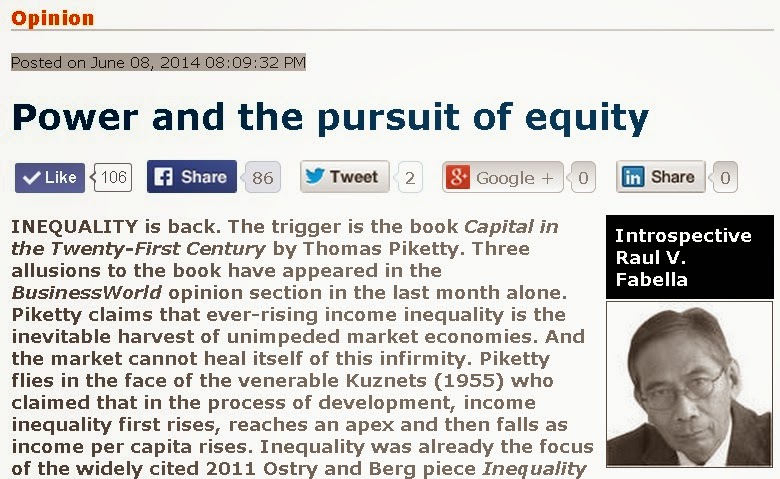 INEQUALITY is back. The trigger is the book Capital in the Twenty-First Century by Thomas Piketty. Three allusions to the book have appeared in the BusinessWorld opinion section in the last month alone. Piketty claims that ever-rising income inequality is the inevitable harvest of unimpeded market economies. And the market cannot heal itself of this infirmity. Piketty flies in the face of the venerable Kuznets (1955) who claimed that in the process of development, income inequality first rises, reaches an apex and then falls as income per capita rises. Inequality was already the focus of the widely cited 2011 Ostry and Berg piece Inequality and Unsustainable Growth: Two Sides of the Same Coin? They showed that income inequality shortened the duration of growth even after taking on board other factors.

The Piketty thesis is being subjected -- as it should -- to a spirited academic debate. But whatever the final verdict on the thesis, the inequality aversion it triggered is now a global staple. We can expect this aversion in the West to wash up the shores of developing countries and recalibrate development policy. There is great promise but even greater risk here for developing countries.

If equity must be served, how should it be pursued? In the past, many attempts to level the income distribution took the form of shackling the market. The most popular form is administered prices: price controls on basic commodities, productivity-divorced minimum wages, rent controls, and usury laws. Another is making illegal certain markets, such as for farm land in the rural areas. What they mostly accomplish is an empty cupboard that leaves most everyone but especially the poorest worse off. These efforts turn pro-poor intentions into anti-poor outcomes. This lesson has a long history.

According to Lactantius (300 AD), in the late 3rd century AD, Emperor Diocletian issued the Edict of Maximum Prices in an attempt to limit prices of commodities by law. As a consequence, much blood was shed for trifles, men were afraid to offer anything for sale, and the scarcity became more excessive and grievous than ever. Until, in the end, the law, after having proved destructive to many people, was from mere necessity abolished.” Unfortunately, Will and Ariel Durant’s famous paean to human frailty still holds: History teaches but man never learns.

The fact of the matter is that equity could be pursued without stultifying the market. The main lesson of microeconomics venerable Second Fundamental Theorem of Welfare is that equity can be pursued without sacrificing efficiency. While this may be an unattainable ideal itself, the residual rule remains wise: Employ equity-pursuing policies which give the market the widest berth. Thus, wealth taxation is preferred to income taxation and income taxation when duly collected is preferred to commodity taxes.

If you want to help the poor, give cash transfers to the targeted poor; don t artificially keep prices of commodities low. Artificially low prices, say, of electricity, are leaky buckets that benefit Forbes Park more than the poor. In general, fiscal transfers to expand opportunities for the targeted poor and their children, such as education, are the best equity strategy.

It is now fashionable to attract investment through public-private partnerships (PPP). But the state must be ready to respect the pricing provisions of the contract despite populist pressure. The government, for example, has lately buckled on the treatment of corporate income tax in the concession contract for water in Metro Manila. This sours the PPP climate and will raise the cost of future procurements. As part of the original come-on for bidders, the tax treatment provision has been priced into the calculation and should be respected by the state.

Currently, the government via the Energy Regulatory Board has embarked on a creeping administration of the Wholesale Electricity Spot Market (WESM) and bilateral contract prices on the pretext of market failure and abuse of market power. At the root of periodic spikes in electricity prices in the recent past and the highest electricity prices in the region is the dearth of new lower-cost baseload generation capacity coming on stream since Electric Power Industry Reform Act (EPIRA) became law. This makes the energy market a sellers market. If administered pricing becomes the rule, private investment in new capacity envisioned in EPIRA will be even less forthcoming.

The Energy Secretary recently said that there is enough power for 2014 and 2015. If this is as much assurance as the government can give, potential investors in the Philippines will look elsewhere. The government can step in to procure new capacity to forestall a looming power crisis, but EPIRA prohibits the government from directly procuring new units unless there is a declaration of a power emergency by the President. Shouldn t PNoy seriously consider declaring a power emergency now and sign contracts for delivery of new baseload to ensure growth beyond 2016? After all, a zero or negative GDP growth is peerless in growing inequity.
-------

I am skeptical of the observation that  if you want to help the poor, give cash transfers to the targeted poor.

I do not like this part, Shouldn t PNoy seriously consider declaring a power emergency now and sign contracts for delivery of new baseload to ensure growth beyond 2016?

There are many baseload plants on stream, they need to be assured that NO unnecessary delays be imposed, like the usual bureaucratism (about 100+ signatures from barangay to DOE to BIR needed to get a power plant constructed to running).

Also, price control is now practiced by ERC at WESM. The original ceiling price of P62/kWh has been reduced to "primary ceiling" of P32/kWh. And last April-May, a "secondary ceiling" of P6.+/kWh was imposed. And ERC is considering of extending that secondary price ceiling to June-July, or even longer.

Just finished reading Andreas Marquart's article. She mentioned about Pikkety's book, and she said, "Piketty’s biggest error is to conclude from the data collected that under capitalism the rich get richer in relation to everyone else. I’m afraid that such a claim is nonsense. Piketty takes his data from a period that is characterized by both capitalism and socialism, and then he attributes everything he dislikes to capitalism. Yet his data is not from a capitalist world. The economic system in which we live today is a crony capitalist system or, we might say, a system of money socialism. And that’s Piketty’s greatest error: to blame capitalism for the negative effects of crony capitalism and money socialism. But perhaps it is no error. Perhaps, he only wants to be loved by politicians and the IMF. I think they love him already, though."