I have always believed in this type of environmentalism -- individuals, private enterprises, civil society initiative in environmental conservation with returns to their investments and effort.

I started planting trees in a private farm owned by the family of a deceased friend in UP, Mil Millora, in 1992. It was limited planting, something like 300 seedlings I think, various species of mahogany, acacia auri, acacia mangium, eucalyptus deglupta, and agoho/Benguet pine. I liked the experience of tree planting in a private farm, not in a public land that is owned by everyone and no one in particular, through the government. The farm is in Brgy. Laguit Padilla, Bugallon, Pangasinan. The town is 198 kms. from Manila and the farm is about 7 kms from the town center. At that time it was all dirt road.

The caretaker of the farm, Nong Endring Paragas and his two sons, helped me in the various tree planting every year. By 1993-1995, we were planting thousands of seedlings, we bought from nearby private nurseries, or we uproot naturally-growing seedlings of mahogany that were too close to each other and plant them elsewhere. 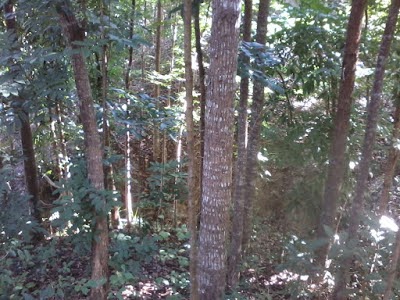 By 2002, we started limited harvesting of trees, those that grew fast from the seedlings we planted a decade before that, or trees that naturally grew on their own. I built my first treehouse that year. Two years after, early 2004, we demolished that small treehouse and built a bigger, two-storey, all wood treehouse.More trees were harvested from the farm. 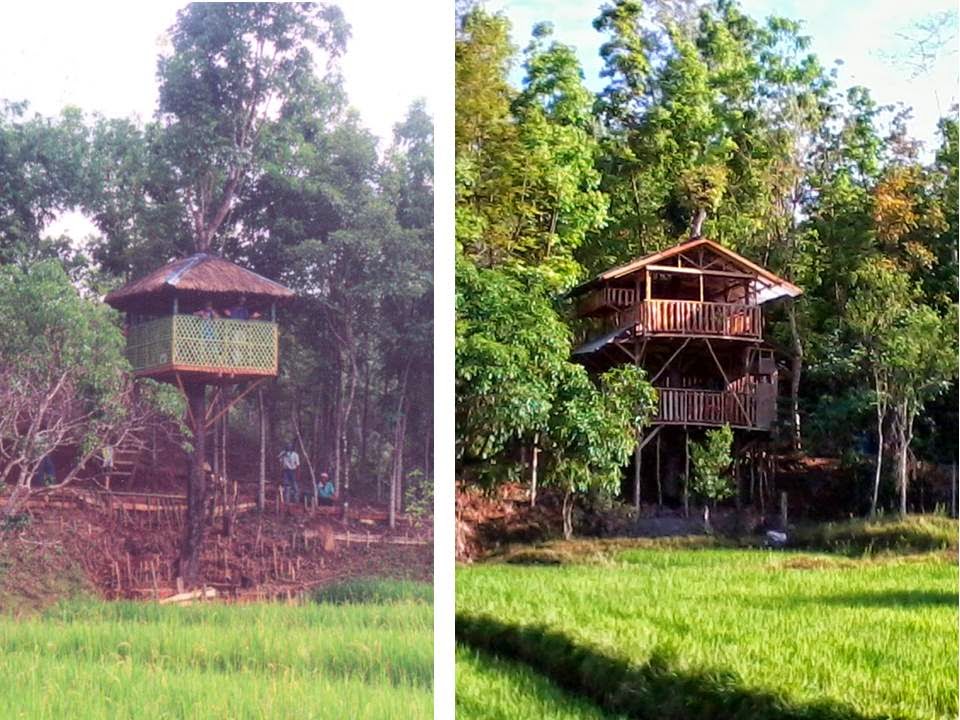 We started selling a few trees for lumber early this decade as we have lots of big trees then. The small revenues were used to pay the monthly salary of the farm caretaker. Commercial harvesting was made in January this year. See here, Selective Logging in the Farm. Even after the selective logging, many trees, from small to medium size to big but crooked trunks were still standing. From February up to this month, we were selling lumber to local buyers, mostly barangay residents who were repairing their old house, or building a new one. Since we got official permit to cut from the Department of Environment and Natural Resources (DENR) provincial office, there was no intrigue or harassment in the cutting of trees. The revenues were enough to pay the monthly salary of the caretaker and his son, Danny, who works part time in the farm to help his ageing father. 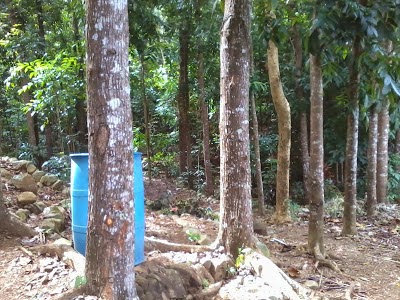 It is a perpetual forest with perpetual revenues, though not substantial.

Stealing and illegal cutting of trees in the public forest land is common there, and even in private farms if these are not guarded. Well, in many parts and provinces of the country actually. The thieves would cut trees for firewood, charcoal, or lumber for their house, or they sell the trees to other people. The daily presence of our caretaker in the farm turns away those thieves.

I tell some friends who are involved in various tree planting activities that they better do it in private lands and farms, not in government lands. Public forest land suffers from the "tragedy of the commons", where the land and the trees in it are owned by everyone and no one in particular, well owned by the government in the name of the public.  Survival rate of seedlings to become big trees someday is almost zero. One or more weeks after the tree planting, nature takes its course -- vines choking the new seedlings, cogon and grasses that grow much faster than the seedlings; wild animals or cattle that step on newly planted seedlings; flash flood in rainy season that erode the topsoil; grass fire and forest fire during the dry season. If the seedlings survive all of these and they manage to grow tall to arms- or limbs-size, people who cut and steal trees as discussed above come in.

Thus, in most tree planting activities in public lands, it is 99 percent tree planting, 1 percent monitoring, if ever. Good for picture taking then posting in facebook. Tree planting, not tree growing.

In private lands where the owners or managers have private stake, it is the reverse; 1 percent tree planting and 99 percent monitoring; when some of those seedlings die for whatever reason/s, they are replaced. Until the seedlings become small trees, become big trees. Whether to harvest them later or retain them to grow even bigger and taller is another story.

The various reforestation programs of the government in public forest land is generally wasteful. I remember when I was working at the House of Representatives from 1991-1999, I was attending various Committee hearings and accounting for the millions of hectares supposedly reforested from hundreds of millions of dollars of loans from the ADB, WB, OECF/Japan and other foreign aid. Loans contracted in the late 80s, and the result were largely lousy. Lots of spending and government borrowings, yes. Lots of new forest, no.

And it did not stop there. New environmental and forestry loans were contracted in the 90s, in the 2000s until this decade, by the Philippine government from the same foreign aid bodies, and very little new forests are visible.

In the public forest land adjacent to our farm in Bugallon, there are tree planting activities there, yearly. And yearly, public funds are used, and no new forest can be seen from the public land. Either the reforestation money is wasted or stolen, or no efficient monitoring is done. Government reforestation is largely wasteful and inefficient, if not a milking cow for various implementers, from the government to the contracted parties, usually NGOs and farmers' cooperatives.

Ok, I may be harsh in my assessment above, but that is what I have observed for more than two decades now.

On another note, there is an International Free Market Environmentalism conference to be held in Georgia this coming July 23-26, 2014. Venue is Hotel Vera Palace, Bakuriani, Mountain Resort, Georgia. Bakuriani is about 2 1/2 hours by car from the capital, Tbilisi.

The conference organizer is the New Economic School (NES). The President of NES–Georgia, Paata Sheshelidze, is a friend way back in 2004, when we attended the Economic Freedom Network (EFN) Asia conference in Hong Kong, sponsored by the Friedrich Naumann Foundation (FNF).

The conference co-sponsores are  FNF Southern Caucasus, Germany, and the Center for Energy and Environment of Competitive Enterprise Institute (CEI), USA. Interested participants can write to: office@nesgeorgia.org.
-------------