Agri Econ 13: What and Where to Plant, Nature vs. Government Planning

Rice trade liberalization, not rice protectionism and "anti-smuggling" campaigns, is a better alternative for the Philippines, Indonesia, Malaysia and other countries. What to plant where, nature itself provides the clue.

This is a good report from the International Rice Research Institute (IRRI), Rice self-sufficiency: A question ofgeography? It observed that

In theory, the reasons why the exporting countries might have more rice area per person could be that their land is more suited to growing rice (as opposed to other crops), cropping intensity (the number of crops planted per unit of agricultural area) is greater, more land is used for agriculture, or more land is available per person (low population density).

Empirically, the proportion of total crop land devoted to rice, which is a measure of the suitability of land for growing rice, explains rice production per person across countries almost perfectly (the R2 of a simple linear regression is 0.92; see Fig. 1). Thus, the importers are all to the lower left of the figure, while the exporters are to the upper right. 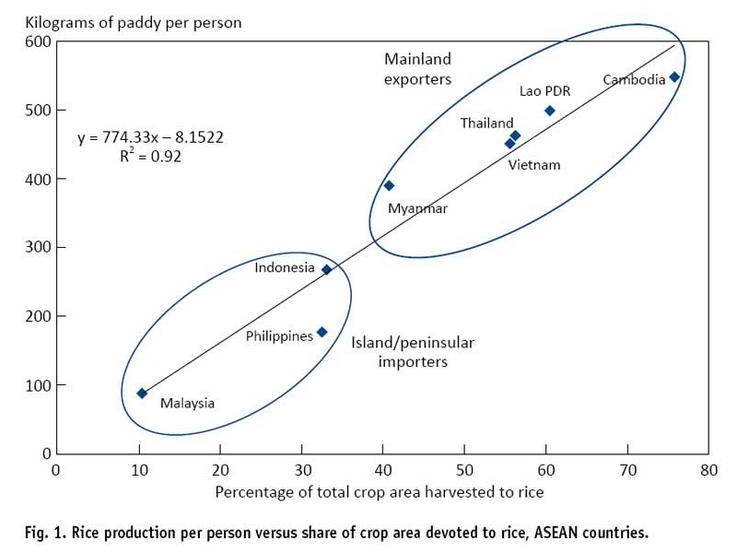 Yes, but while one's grandfather and father were rice farmers, he can be a vegetable farmer, or chicken or goat farmer. Very often, governments waste resources, like forcing rice "self-sufficiency" policy and compromising other policies and taxpayers' money. The endless agrarian reform (only 2-3 years in Japan, S. Korea, Taiwan) that is now 42 years, counting only from 1972 Marcos' agrarian reform, is mainly premised on encouraging or forcing rice self-sufficiency. That IRRI paper should help douse cold water in the minds of the rice protectionist groups.

An American friend based in Iloilo, Bruce Hall, made a good observation early this year. He wrote,

Why is rice smuggling even a crime? Food should be a cheap as possible. If that means that I buy my rice from a poor farmer a thousand miles away in another country rather than hundreds of miles away, so be it. What is important is that food is cheaper so that the poor can afford to eat. Already 1/3 of Filipino children are underweight or under-height.

According to the two PhilRice economists, domestic price of rice was up to 75% higher than average global rice prices in 2000. The gap reduced in 2008, but price differential widened again to around 30% in 2012 mainly due to higher import tariffs (of about 50% beyond quantitative restrictions quota) and higher production costs...

The economists say that Free Trade Agreements with ASEAN countries next year will force the government to reduce trade barriers which in turn will minimize rice smuggling in to the Philippines.

It's good that some government researchers are mindful not to keep punishing us average rice consumers with government-created expensive rice policy.

If global food production must double within 4 decades or so while the land area for agri cultivation generally remains the same, then productivity must increase 2x. More science, more genetic modification, more free enterprise will be needed. Chart from WEF. 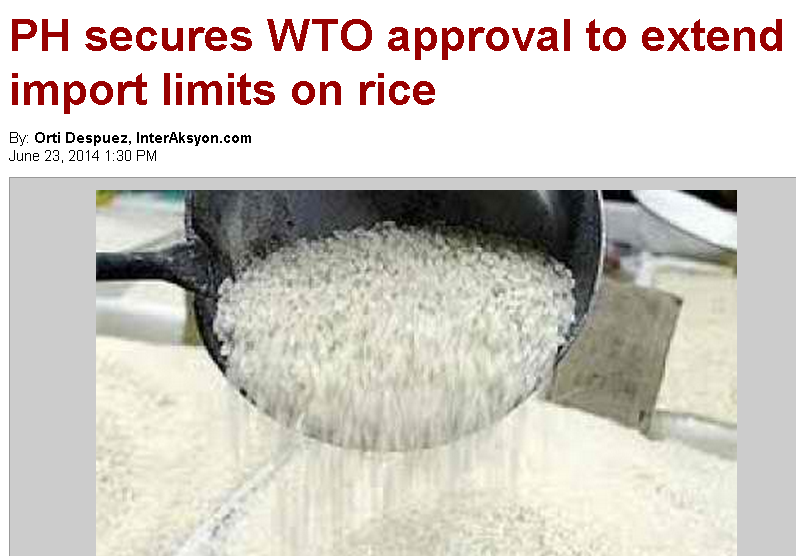 I think the Philippines is the ONLY member-country of WTO that retains the QR. All other rice importing countries have converted their QRs into tariff. Even socialist China shun QR for their rice imports. And socialist Vietnam enjoys free trade of rice and other agri commodities. 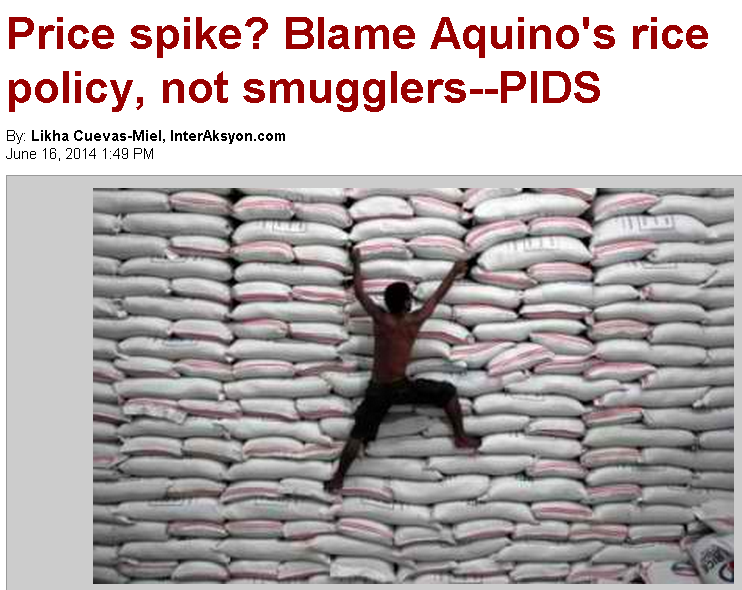 And this report last week.

I think it is National Food Authority (NFA) protectionism and bureaucratism that is at the root of this expensive rice problem when rice prices should be going down. Of course the never-ending agrarian reform and dislike of corporate rice farming also contributes to the problem.
----------------