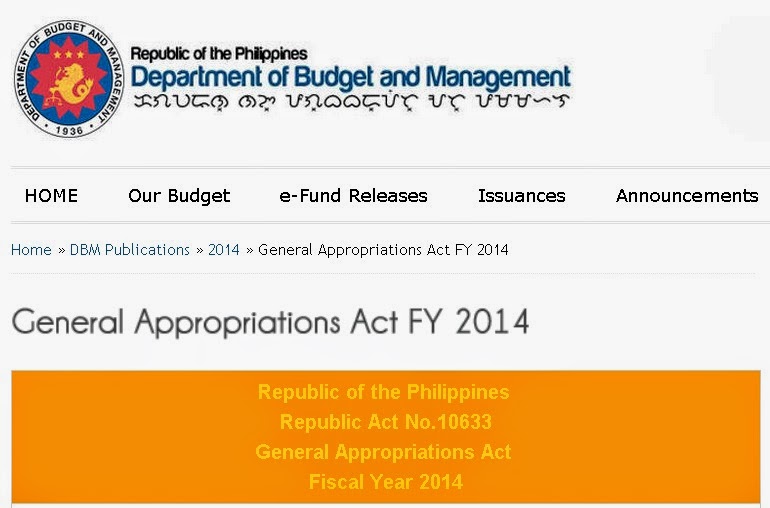 The Department of Budget and Management (DBM) has announced that the projected budget of the Philippine government next year will be around P2.6 trillion ($59.63 billion at P43.60/US$) or more than P300 billion than this year's P2.26 trillion budget. That means P2.6 trillion of taxes, fees and borrowings.

A P3 trillion budget for 2016, and P3 trillion taxes, fees and borrowings, is just around the corner. Government, national and local, keeps expanding. On years of no crisis or emergencies, a responsible government should have fiscal surplus, pay many loans and reduce the public debt, currently rising by around P400 B a year. In post-emergencies year, running a budget deficit and resume borrowings is understandable. But the government just keeps expanding and borrowing, with or without a crisis or emergencies.

While politicians and legislators, and those in the Executive branch are directly to blame for endless expansion of government, the public also share the guilt. For any problem they see, they think that more government is the solution. They seek endless government subsidies, endless government new regulations.

People should be careful what they wish for or request from the government, especially new legislations. Almost ALL government subsidy programs created by legislation are forever, they never go away as all laws here have no sunset (timetable) provisions. All new regulations create new or expand existing bureaucracies that exist forever. And the BIR will keep inventing new harassments, new requirements, to doctors, entrepreneurs, even those in informal sector, so that it can raise more tax revenues. We already saw it in the BIR-doctors love-hate affair. Expect the worst to come in the coming years.

I am curious how much will be the interest payment alone for 2015. Public debt stock is rising by around P300 B a year, with or without a crisis or emergencies.

Government should learn to live within its means. If projected revenues next year are P2.3 trillion, then the budget should be at that level only, not P2.6 trillion then borrow P300 billion. Government should stop borrowing even for one year. If new welfare programs have to be invented, then some old welfare programs that do not seem to work should be shrank, if not discontinued. The national government should focus on improving the institutions for rule of law implementation. The poor appreciate fast and credible delivery of justice as much as the rich.
---------

A physician friend engaged me in a private discussion. His ideas are useful, I am posting our short discussion here.

Him: Sir Nonoy﻿, we cannot continue living beyond our means. Either cut the budget, impose new taxes, cut losses due to inefficiencies and corruption or a combination of the three.

Me: Yes, that was my point. The Executive, as tolerated by the Legislative branch courtesy of pork barrel, keeps living beyond its means. Too much fiscal irresponsibility. This makes tax cut proposals become more difficult. Too many spending.

Him: well sir, there are those arguing that if government spending contracts without the private sector coming in, our economic growth will be compromised. i would prefer living within our means, whether as individuals, families, communities, or as a nation. We are lucky interest rates are down. but what if it shoots up? just the interest payments will kill us hehe.

Me: PH government interest payment alone is P330 B a year. And it should rise to P350 B yearly soon. That is killing certain sectors of the PH economy already.

If government reduces spending, it reduces heavy taxation and borrowings too, more money in the pockets of people and firms, they can expand and hire more people. If people have stable jobs, what is the need for rising government spending, except to fatten the salaries and perks of those in government.

Him: although sir there will be expenditures for certain social needs which the  private sector cannot or will not spend for (i.e. national defence). but i agree that we must spend within our means

Me: Actually defense spending here is verrryyy bloated. The big threat to the people is internal -- criminals, thieves, rapists, murderers, etc. Police function, not military function. That is why private security agencies are everywhere. Peace and order has been privatized, what a horrible government failure.

Him: regarding defense spending, Im no expert but our AFP does need upgrading. hehe. also our PNP.

Me: AFP modernization can be funded by privatizing Camp Aguinaldo, all of the proceeds should go to AFP fund, so there will be no need for new taxes, new borrowings. AFP can move to Cavite or Bataan. Their function or mandate is external defense, not internal.
-----------