A physician friend, Doc Tony Leachon, posted this  poster in his fb wall and asked, “Do you agree? Yes or No?” 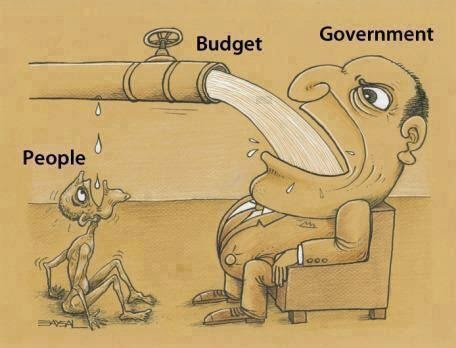 ALL the first 26 comments have answered Yes, directly or indirectly. And the succeeding many other comments also said Yes. Not one said No. Coming from mostly physician-friends of Dr. Leachon.

There were three notable comments there:

1. Mark: The problem is that power corrupts. You may not be corrupt when you enter politics but you are at very high risk of bring corrupt when in power and exposed to all that money flowing around.

3. A former DOH official: “frustrated working on the DOH budget. ‘bondat na bondat na ang DOH sa dami ng Pera..di na Kayang nguyain.’ The problem is, the success of the department is measured on how much budget you can get. DBM introduced performance-based budgeting but the problem is beyond planning and spending...it's on the capacity to implement, existing infrastructure of the local government, procurement policy and process. Mahigpit sa gumagawa ng tama pero sa mga katulad ni Napoles walang existing system!

“We need to develop a very good monitoring system on where the money went, how it was used and it's impact based on the objectives. There has to be a very very clear indicators on how to use the funds Hindi lang where and what.”

Take note of this: "We need to develop a very good monitoring system on where the money went, how it was used and it's impact based on the objectives."

That is exactly the role of Congress -- have oversight functions over the money that it authorized and appropriated for the Executive Branch. Congress is not doing its job. The Executive is wasteful, the Legislative tolerates its wastefulness, in exchange for pork barrel. That is why the pork barrel system can never be abolished or eliminated. Its size is directly proportional to the wastefulness of government in general, it is a bribe by the Executive to the Legislative so that the former can continue with its wasteful, living beyond its means, philosophy and practices.

Even if income tax is 50 percent of personal and corporate incomes, it will never be enough. All that government will do is to keep expanding like amoeba. Both national and local governments. B

Doc Tony asked me, “where do we start now ? The people are waiting for the execution of the plan. With the PDAF investigation , the senate and congress are all busy.”

Well, my quick modest and doable proposals are as follows:

2. No new borrowings, have zero budget deficit for 2015, government to live within its means. If projected total revenue is P2.2 trillion, then spending should be only P2.2 trillion, not P2.5 trillion because government will borrow P300 billion.

The public debt stock is rising by around P400 billion a year, with or without a crisis, it just keeps rising and expanding like amoeba. Thus, annual interest payment alone remains high, around P330 billion a year.

I am not suggesting drastically shrinking government to only one-half or one-third of its current size and spending (not doable) nor the abolition of government (anarchist argument, not doable either). I am suggesting modest and doable action programs. Once government and its various bureaucracies and personnel see that they can still exist with “less” resources and no need for borrowings and fiscal irresponsibility, personal and official responsibility can trickle again back to government consciousness.

I would also add:

The ONLY government is rules as many or more people and that is as centralized as the Philippines and that is less corrupt is Japan, and Japan is just odd. All the other countries that are over 100 million people are either federal or more corrupt.

2) Improve accountability by moving the decision-making physically closer to the project. Out-of-sight/out-of-mind. There are a reasons why Metro Manila is better run than Mindinao and one is that the decision-makers live with their projects and the people who are affected by them. If EDSA is screwed up, they here about it at church and at school events. Look at how much press and national government attention Meralco's rates rise got versus the terrible electricity problems of Mindanao.

Osmena was wrong when he implied that Americans or the Spanish can run the Philippines like heaven. They couldn't. No absenttee ruler can. Neither can Manila.

3) More elections more often for more offices. The only real way to hold officials accountable is hold elections. You cannot expect one part of government to hold another part accountable. You must go outside the government to hold the government accountable -- and means elections. Who held GMA responsible? It wasn't Congress, It wasn't the courts. It wasn't the Ombudsmen. The only check on GMA were the voters. First they voted against nearly every single one of her senate candidates and then they voted overwhelmingly against her, her candidate and her party. Where is Lakas-CMD now? The only reason why corruption continued for so long was that there was too long a break between elections.

It is not a coincidence that the least-corrupt governments in the world are small, close to the people and the projects and democratic. It is not a guarantee. There can be no prefectfully honest system in this fallen, sinful world. But it will help.