This afternoon, around 3:15pm, there was heavy rain for an hour in Makati, then light rains for the next 20 minutes or so. Many parts of Metro Manila experienced such downpour, also some surrounding provinces. Many streets were flooded. 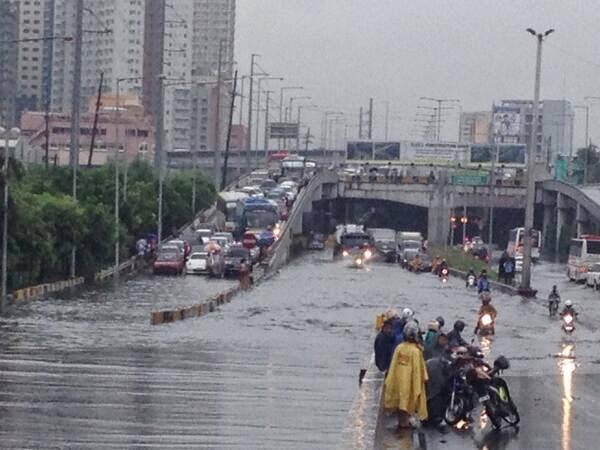 Heaaaavvyy traffic followed in many areas of the metropolis, especially in Buendia and Ayala Avenue in Makati.  Productivity losses today is big; fuel consumption by cars and buses is big. I think this unresolved flooding in many Makati streets will affect the candidacy of VP Binay in 2016.

That area at the PNR rails, Mayapis st-Buendia near SLEX flyover, is a perennial headache. Flash flood from Ayala, Buendia, other streets go to that small and narrow creek. The Binays were the Mayors (father, mother, now the son) of Makati for 28 years now, uninterrupted. They could have done something significant in that area.

(photo from inquirer.net; Skyway and Buendia-SLEX intersection below, Makati) 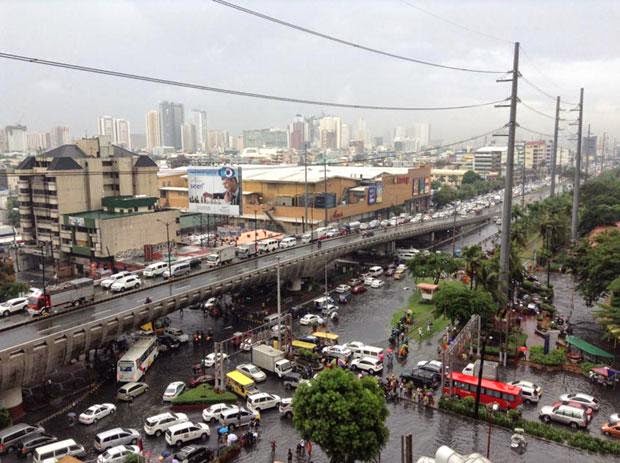 One reason why I support another reclamation project in Manila Bay is that the many creeks and rivers in the metropolis need large scale, monster and sustained dredging. Get all those mud, soil and solid wastes and dump them not in sanitary landfills in Quezon City or Montalban or Bulacan, but in a new land to be created at Manila Bay. It's the quickest and cheapest solution that I can think of to minimize frequent street flooding in Makati, other cities of Metro Manila.

In the last 8000 years, sea level has been substantially higher than at present, up to 2 meters or more higher in two periods four to seven thousand years ago. Sea level during the Holocene has been falling since that period.

A friend who has worked for more than 15 years in Makati, Eniale S.,said that there was major drainage re-piping on both sides of the railroad (intersection Buendia & SLEX) from former Eastern Telecoms and where the new Cash n' Carry is now, across the railroad up to Makati Med area. Huge drainage pipes, diameters that can accommodate a regular-sized car, and heavy equipment were used for more than a year.

The creek in that area, Mayapis St. along the rail tracks, is simply too narrow, too shallow, to absorb huge volume of flood waters from many parts of Makati.

Good project by the Makati City government then. But I think the drainage is not regularly dredged. Just one heavy flash flood can bring in tons of mud and solid waste into the belly of those drainage pipes, and there are many flash floods yearly. If they are not cleared and dredged yearly, perhaps even a tricycle would no longer fit in those huge pipes. And that contributes to frequent street flooding.

It's a pity that Buendia-Ayala-Pasay Road network is where the employees, managers and CEOs of many of the country's big companies and financial institutions pass daily, and they are subjected to this regular traffic torture.
-------------

well...... guess what it happened again yesterday! and this is just 1st week of July!!!