A good statement and warning from the FEF on guaranteed rate for solar energy producers. The average generation charge by various power generation companies (from coal, natural gas, geothermal, hydro, oil-based, some renewables) collected by Meralco is about P5.70/kWh (+/- 10 to 20 centavos). The solar producers are given guaranteed rate of P9.68/kWh, or about P4 more expensive than existing rates. We already have a high electricity cost in Asia, the FIT for solar, wind and other renewables will make it even more expensive.

Solar power, wind, biomass are cool, I am not against them per se. I am against the subsidy via FIT that is granted to producers of those renewables. That Renewable Energy Act of 2008 (RA 9513) is a huge energy robbery scheme engineered or inspired by various climate alarmist groups like the UN, WWF and Greenpeace, that will victimize Philippine-based energy consumers.
------------- 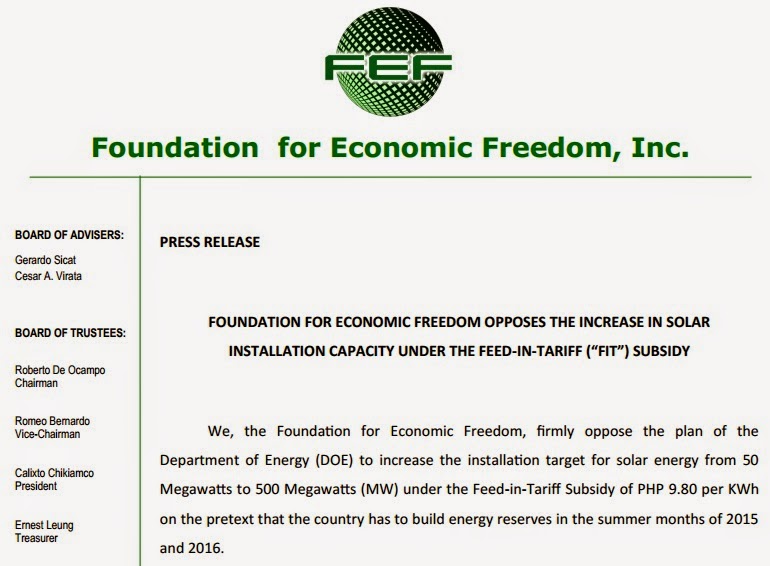 We, the Foundation for Economic Freedom, firmly oppose the plan of the Department of Energy (DOE) to increase the installation target for solar energy from 50 Megawatts to 500 Megawatts (MW) under the Feed-in-Tariff Subsidy of PHP 9.80 per KWh on the pretext that the country has to build energy reserves in the summer months of 2015 and 2016.

We believe the DOE’s decision is illogical, arbitrary, and represents an unjust burden on Filipino electricity consumers.  It is illogical because while the perceived “emergency” is only during the summer months of 2015 and 2016, the decision will burden Filipino electricity consumers with additional power charges amounting to PHP 12 billion annually for the next 20 years, or a grand total of PHP 240 Billion pesos.  This gigantic burden is on top of the already approved subsidy for the existing installation targets for renewable energy that is conservatively estimated at PHP 8 billion pesos annually for the next 20 years.

Solar energy developers will enjoy a Feed-in-Tariff (“FIT”) rate of PHP 9.68/kWh for the 500 MW when the Wholesale Electricity Spot Market (WESM) rate is at least half of that.  The difference between the WESM rate and the FIT rate will be shouldered by the Filipino consumers.

We estimate that the total additional bill for Filipino consumers to be at least PHP 0.32/kW hour if the additional subsidies for the expanded solar installation capacity is taken into account.

Under the existing rules of the Feed-in-Tariff system, the renewable energy developers, including the solar energy producers, will enjoy a guaranteed rate of return of 16% per annum for the next 20 years.  The FIT rates are fixed for 20 years, irrespective of advances in technology and reductions in cost of capital equipment.

These developers will enjoy a greater amount of abnormal profits because the FIT rates calculated by the Energy Regulatory Commission two years ago may be too high given the drops in interest rates and the cost of capital equipment.

The burden on Filipino consumers goes beyond the Feed-in-Tariff subsidy to Renewable Energy developers.  Solar is an intermittent power source:  it doesn’t generate power at night or when the sun is covered by clouds.  It has an efficiency rating of only 16 to 20%, which means that most of the time the equipment lies idle.  Because of its intermittent nature, the grid has to build additional reserves.  These additional energy reserves are added costs that will be passed on to the consumers.

The additional electricity costs will further lessen the competitiveness of Filipino manufacturers and cause job losses.

It is absurd that manufacturers and consumers have to bear  this additional onerous burden for the next 20 years to address a perceived problem that will last for a mere two months in 2015 and 2016 considering alternative solutions are possible and less expensive.  The plan of the Department of Energy will only fatten the profits of solar energy developers and their foreign equipment suppliers at the expense of Filipino consumers who must bear the additional unjust burden, which is effectively a tax, for the next 20 years.

We, the Foundation for Economic Freedom, are not against renewable energy per se, but against the obscene prices that must be borne by the Filipino consumers due to the exorbitant Feed-in-Tariff rates and duration (20 years) given to renewable energy developers.
-------------

That is so cute, I would of never thought of that. I am definitely making me one or maybe a few! Lol