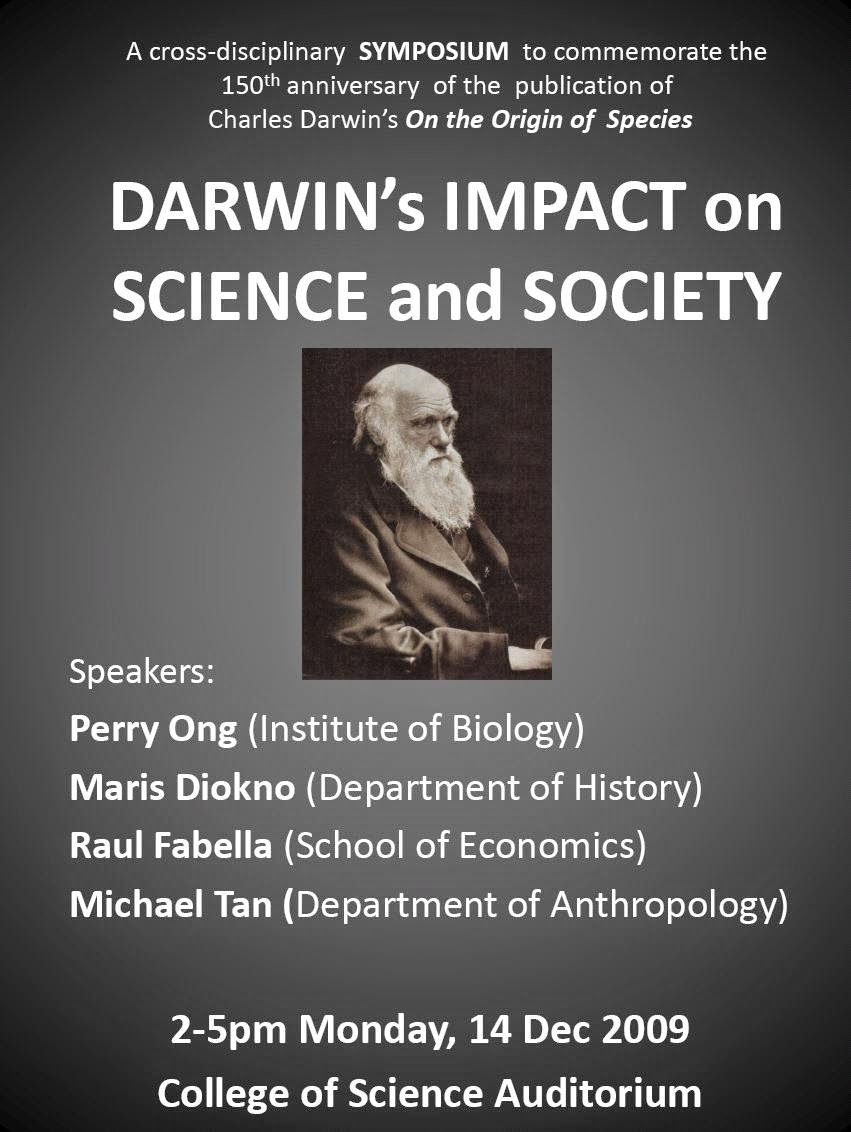 Four and a half years ago, I attended this forum in UP Diliman. I was invited by a good friend, mathematician Fidel Nemenzo, who was then the Director I think, of the Science, Technology and Society (STS) program in UP, aside from being a Math Professor.

Fidel rediscovered the Closing Remarks he gave that afternoon from his old files and sent it to me. Posting it below.

It was a big audience. And... Ahaa! I also found this from my old files of photos. That day, I was seated next to my former boss, Prof. Randy David. In front of us were Dr. Raul Fabella (left) and Dr. Perry Ong (right). The latter by the way, is among the natural scientists of UP who are non-believers of the "man-made" warming political science of the UN and various environmentalist groups.

Ideally, we ought to have a longer symposium—maybe even a week-long conference. We are after all examining the impact of one of the most innovative and influential scientific theories of all time.

This is our small way of commemorating the 150th year of the publication of Charles’ Darwin’s groundbreaking The Origin of the Species. We are holding this cross-disciplinary symposium to honor Darwin’s enduring legacy and examine how his ideas have shaped thinking within and beyond biology. Even the controversies that these have provoked have enriched discourse, within and across disciplines.

Dr Perry Ong (Institute of Biology) talked about the three F’s and power of Darwin’s theory as an explanatory framework for biology. I would not go as far as saying that evolution is fact and not merely a theory-  as some declare. A scientific theory, unlike abstract mathematics, is merely a testable, falsifiable approximation of truth, which is discarded once proved to be false, giving way to better theories. But Darwins’s theory of evolution has withstood the test of time and the rigorous scrutiny of the scientific community, supported by a growing body of evidence. And unlike Newton and Einstein who proposed only descriptive theories, Darwin proposed both a descriptive theory and a plausible mechanism—that of  heritable variation with natural selection.

Dr Maris Diokno (Department of History) posed the question: how should historians teach the ideas of Darwin, and science in general? She lamented the trivialization of ideas and the biased and sloppy treatment of science in textbooks, brought about by a misunderstanding of science, and as well as that of science as it develops within history. Both historian and scientist need to dispel these misconceptions, by effectively communicating science and the history of science within our schools and to the general public. The history of science needs scientists, she says. Historians and writers of textbooks, too on the other hand have to study science.

The global economic crisis, as Dr Raul Fabella (School of Economics) reminds us, was a reality check for theorists who viewed the neat formalism such as that of Newtonian physics as appropriate for economics. This mathematization of  economics has led to the worsening exile of much of theory from the reality of financial bubbles and crashes. The turmoil in economics calls for new ideas and alternatives. Dr Fabella asserted that insights from Darwin and evolutionary biology will contribute to the rethinking in economic theory.

Darwinism of course continues to provoke controversy, as all great ideas do.  Current debates rage between scientists like Richard Dawkins, author of The God Delusion,  and critics on the side of religion, who cannot accept purposeless natural selection as the shaping mechanism behind evolution.

Dr Michael Tan (Department of Anthropology) discussed how science developed in the context of history and culture, arguing that modern science, in a way, emerged from religion and cultures that grew around religions. He cited as example the spirit and methods of inquiry of ancient Muslim scholars, whose scientific and mathematical contributions are part of the foundations of modern science. The problem, according to Dr Tan,  is  that the voices that ring loudest are those of the religious fundamentalists and the atheist scientists, whose narrow views merely feed each other. Equating science with the abandonment of religion fits the prejudices of advocates of intelligent design and creationism.  A deeper look at science and culture show that there is much room for dialogue. It is only when assertions are made beyond the legitimate boundaries of these non-overlapping realms of knowledge that the theory of evolution and religion seem antithetical.

In behalf of the college of science, I would like to thank our four speakers, for their generosity, for sharing their views on Darwin with a broad public audience such as this. We thank the School of Economics for co-sponsoring this symposium, and the Diliman Interactive Resource Center for setting up the equipment to record this event and beam it overseas, and make it available online as podcast. This symposium grew out of a reminder by Dean Noel de Dios (School of Economics) that 2009, Darwin’s bicentenary, and 150th anniversary of his theory, was about to end. And how wonderful to end the year with a forum like this one, where we get together to share and debate ideas. We may come from different colleges but occasions like this remind us that we belong to   a community of scholars, and that while we do our research in our respective disciplines, we also need to explore the many ways in which our disciplines interact. We hope that we have more of these in the future. Thank you for coming, and good day to everyone.