Yesterday I attended this important forum at Edsa Shangrila Hotel in Ortigas Center.  It was sponsored by Institute of Bangsamoro Studies (IBS), Philippine Institute for Peace, Violence and Terrorism Research (PIPVTR), Centre for Humanitarian Dialogue (HD Centre), and the European Union (EU) in the Philippines. I was invited by a friend, Prof. Rommel Banlaoi, Chairman of the Board of PIPVTR. 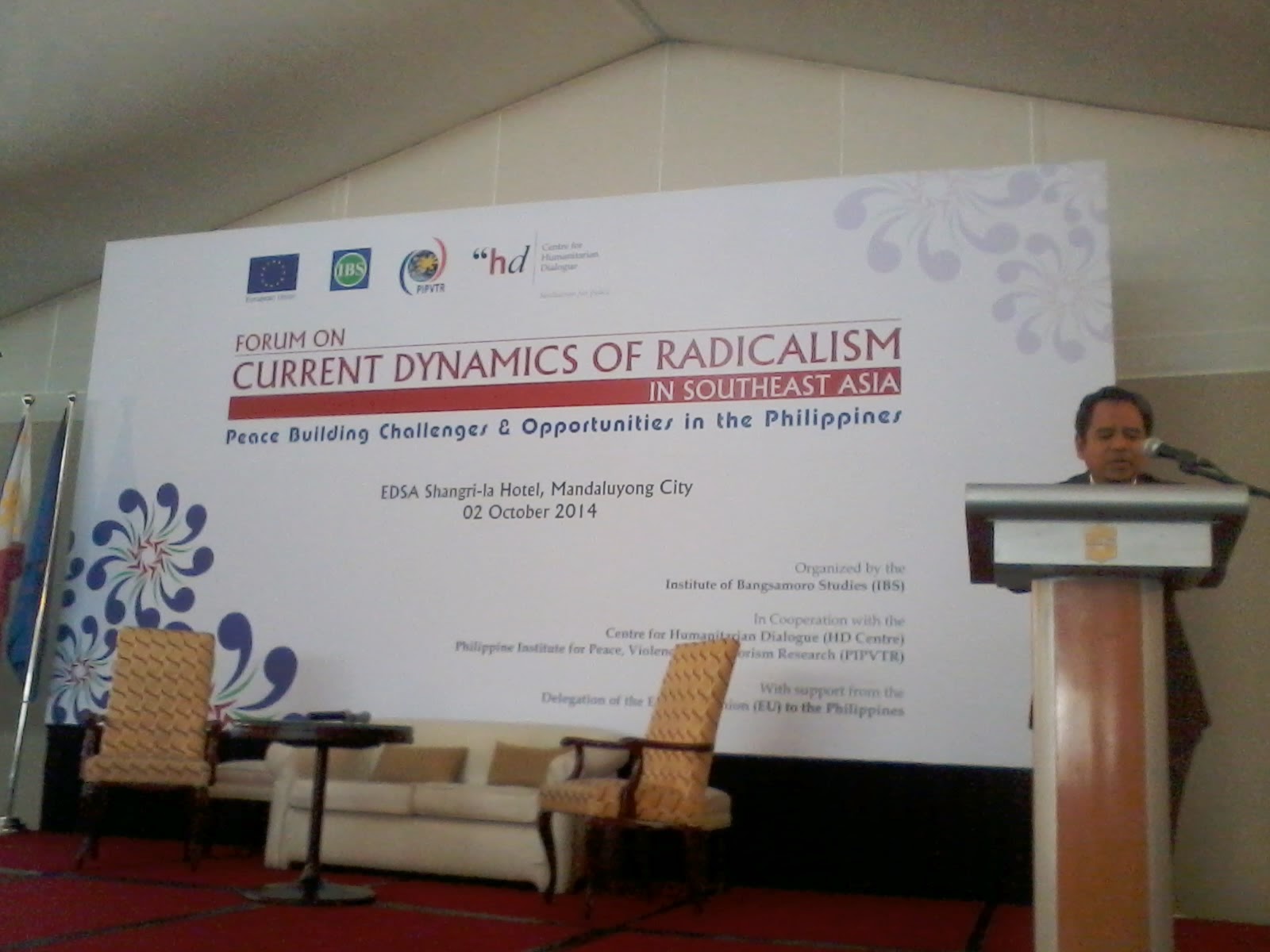 Keynote Address was given by Gen. Kakilala who represented Gen. Gregorio P. Catapang, Jr., Chief of Staff of the Armed Forces of the Philippine (AFP). I came late and I was not able to catch his presentation. I saw the presentations on "Radicalism in Southeast Asia" by Dr. Sapto  Waluyo of the Ministry of Social Affairs, Indonesia (above photo) and Asst. Sec. Oscar Valenzuela, Anti-Terrorism Council (ATC), Office of the President, Philippines.

The venue, the air-con tent on the 2nd floor of the hotel was full. Many from different foreign embassies in Manila (40+ in the list of participants), from the PH government including the PNP and AFP (about 30), NGOs (30+, me included), academe and media. 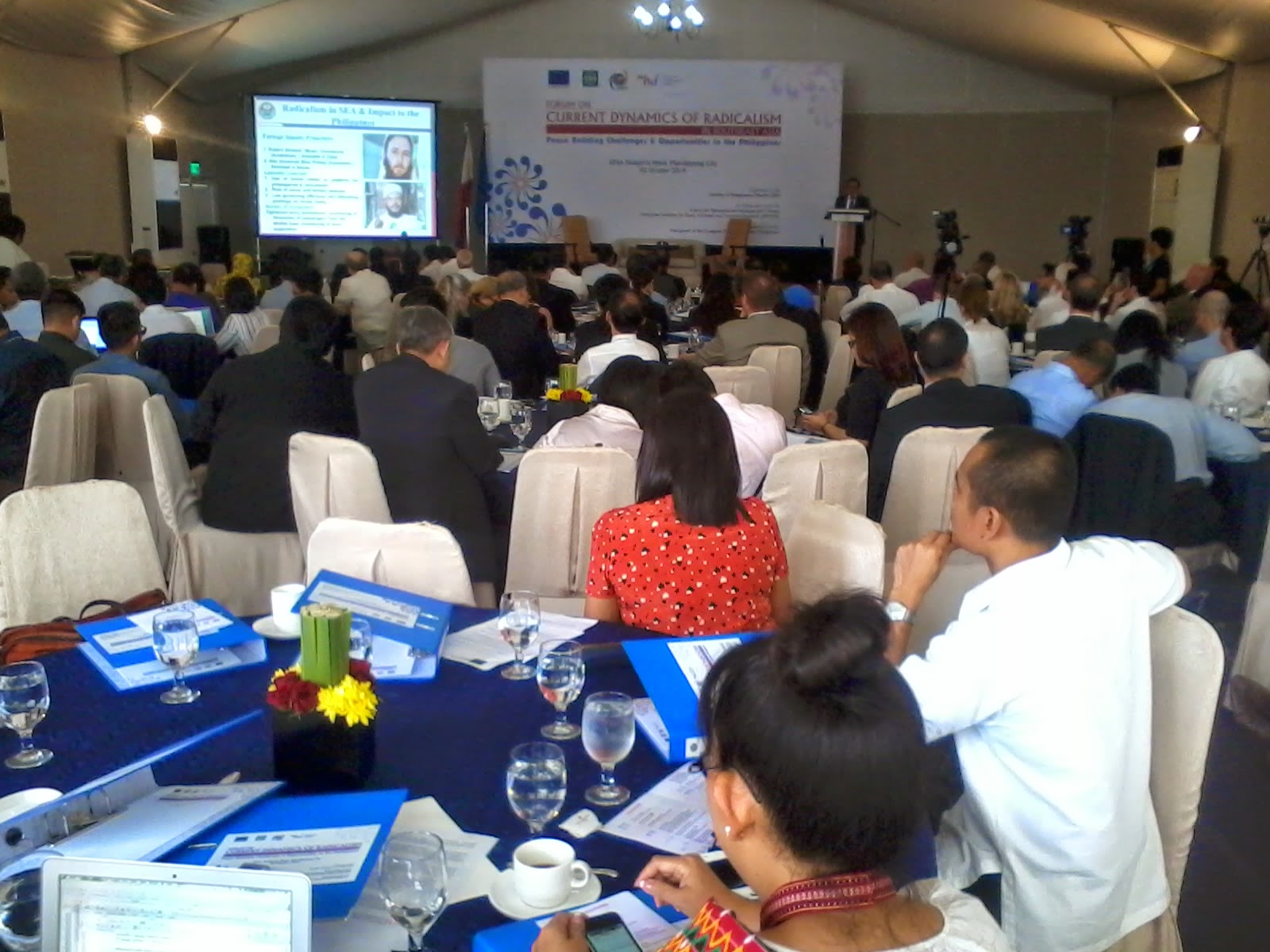 The most interesting presentations that day were made by these two guys, Rommel (left) and Abhoud Syed M. Lingga, Executive Director of IBS (right). 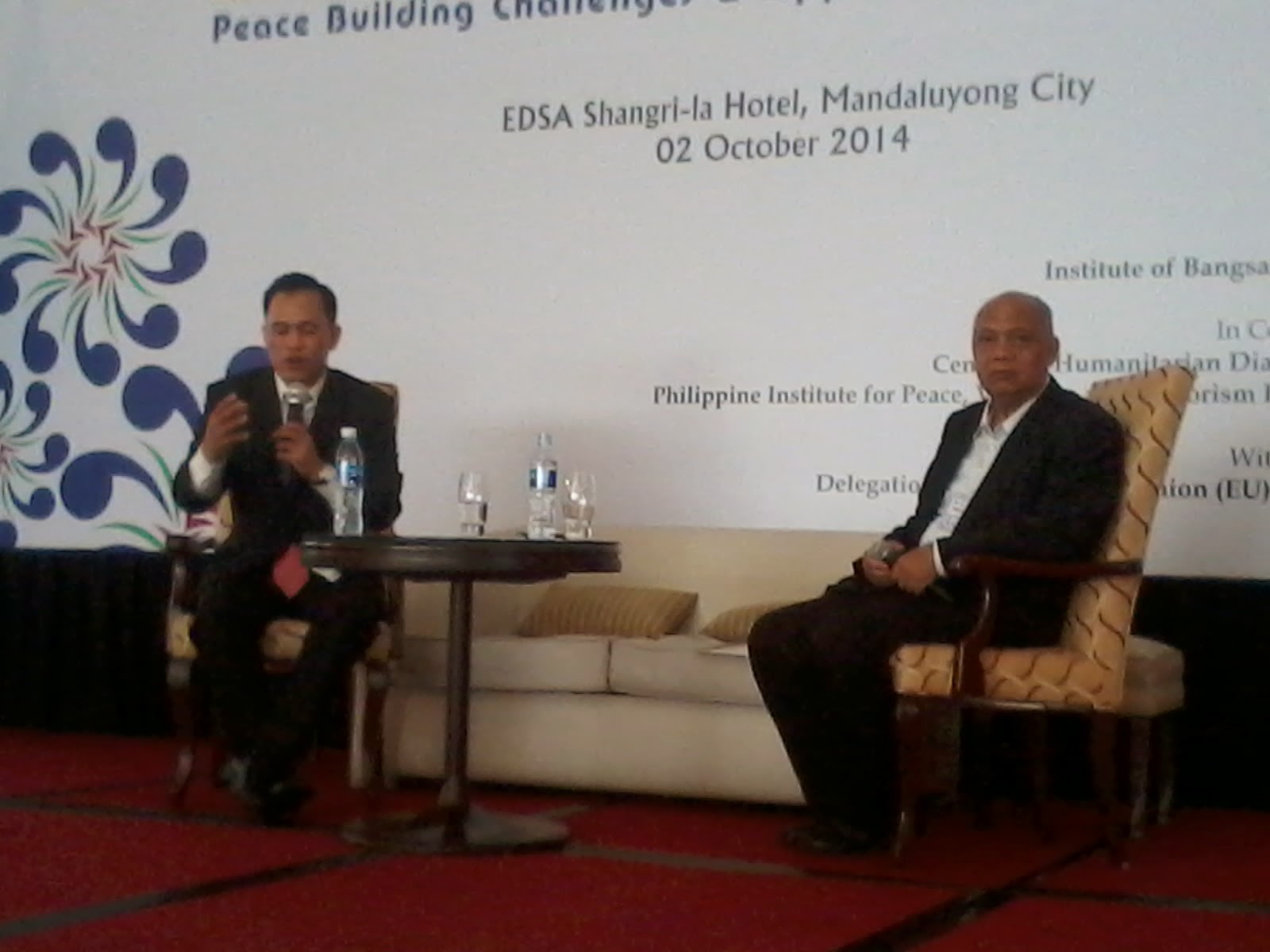 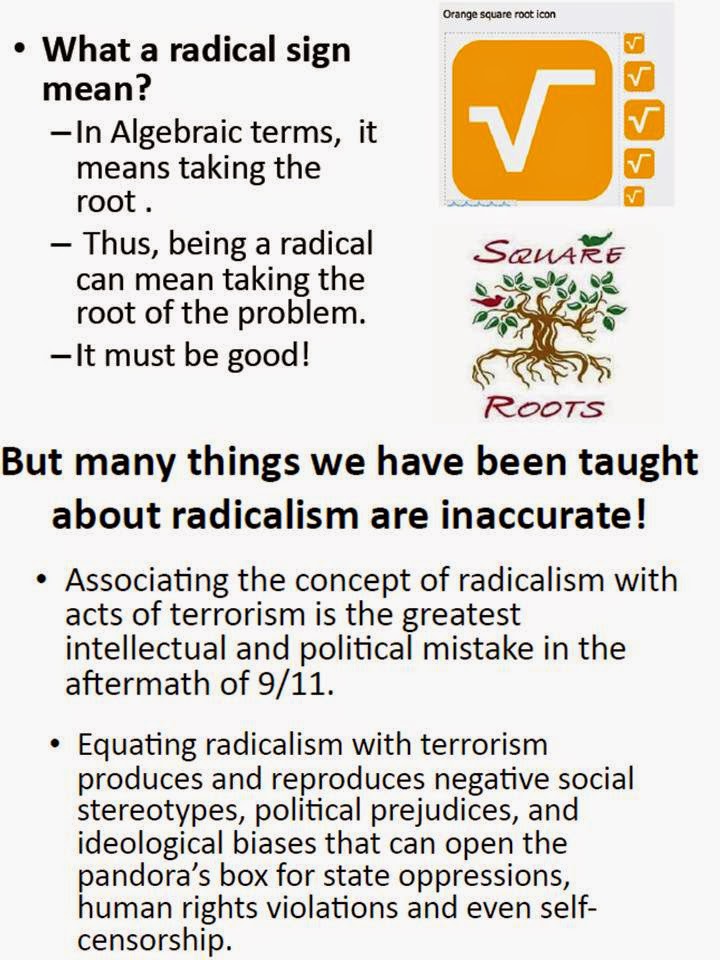 Rommel's presentation was long but he delivered it fast and quick. I like his discussion delineating radicalism and terrorism, radicals and terrorists, that in most cases, these are two  different entities, not one and the same as we often hear and read.

To be radical means to have some innovative, creative, revolutionary yet sensical ideas that were not proposed before, or were proposed by only a small minority in society. In this sense, to be radical means being useful, not  harmful,  to  society. And this is not what we hear or read, especially from the government and mainstream media. 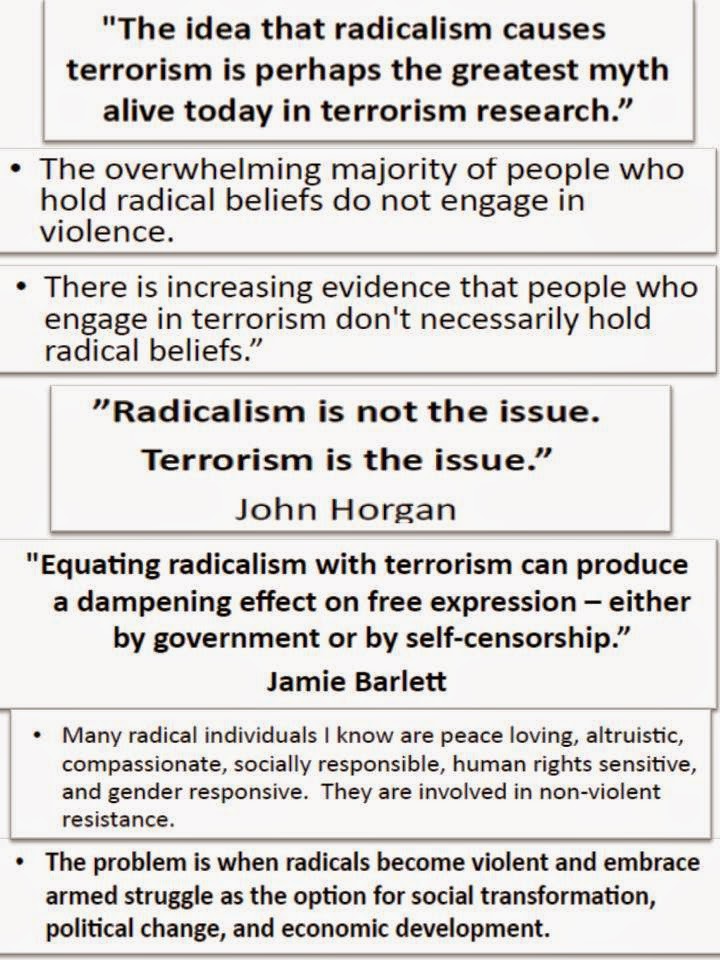 Nice quotes where Rommel partly got these insights. He also mentioned Jean Jacques Rousseau, a classical French political philosopher, on the subject of radicalism.

I like these quotes because they apply to what we are doing in Minimal (not zero) Government Thinkers -- advocating less and limited government, less taxes and mandatory fees, more personal freedom and responsibillity, rule of law -- without advocating violence. Zero tolerance for violence and physical attacks. To be radical means to have high degree of tolerance and respect for people's diversity and spontaneity. People can be very bright or very stupid in advocating something, fine, so long as no violence is used to advance such advocacies. 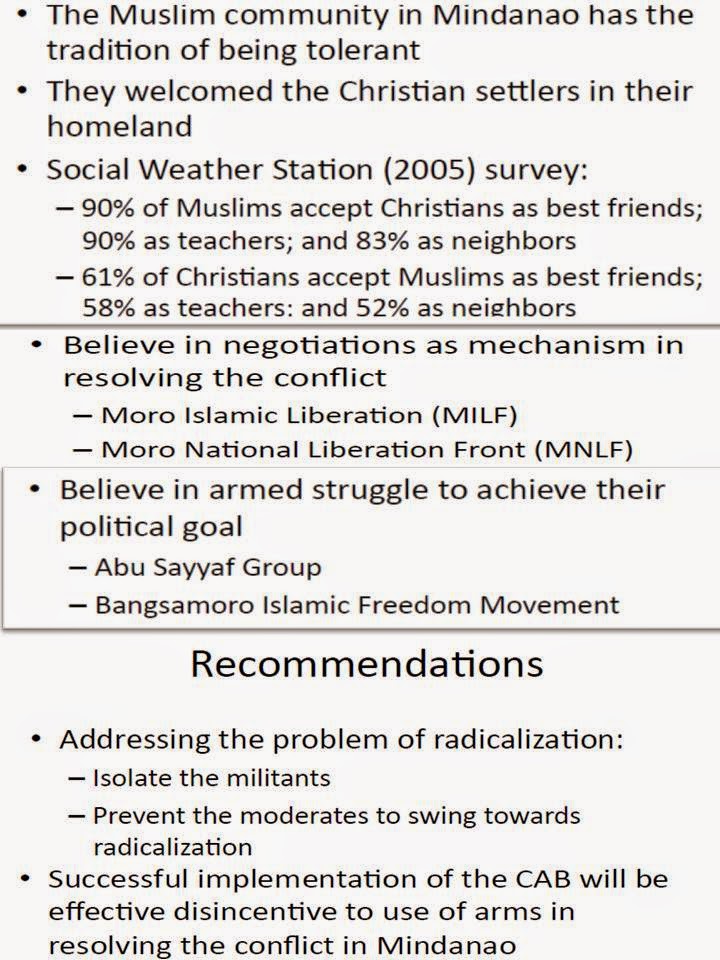 Here are portions of the presentations by Mr. (or Prof?) Lingga. I like his data on the peaceful nature of Filipino Muslims, their high tolerance to live and co-exist with non-Muslims.

Rommel has a longer list of violent Islamic fundamentalist groups aside from the Abu Sayyaf Group (ASG) and the BIFF. These include the Rogue MNLF Elements (RME), Jimayah Islamiyah (JI) and the Khilafa Islamiyah Mindanao (KIM).


During the open forum, I spoke and argued that the bloated and pampered AFP and PNP bureaucracies are part of the problem why violence by the local communists (CPP-NPA) and Muslim secessionist movement stayed too long. Dealing with these violent local groups should be primarily a police function (plus LGUs, civil society), not military function (their constitutional mandate is external defense) hat generally uses heavy armaments and often, commit human rights violations, deliberately or not  The police are not doing this job, the AFP comes in to do what the police should be doing, and huge AFP annual budget and perks are justified while the PNP also keep their huge annual budget.

I asked Mr.  Lingga if there is a  substantial sector of Filipino Muslims who  think this way too, of the negative impact of heavy military and police bureaucratism. Unfortunately, the impression I gave (or his impression) was that I was asking about overall government bloated bureaucracies. He answered that the new entity under the proposed Bangsamoro  Basic Law (BBL) will determine what is the appropriate and  optimal size of bureaucracy they will  have.

After the open  forum, I approached him and mentioned that I  was referring  to  the AFP-PNP bureaucracies. The people feel unsafe while paying many taxes to sustain these two huge armed bureaucracies (plus many other bureaucracies). So they get many private security agencies to have peace of mind, or they arm themselves and put justice in their hands, common in many provinces in Mindanao.

I met many new faces there. Since I came  late, all the seats in  the middle and rear  tables  were fully occupied. A staff of one of the organizers looked for a vacant seat, he found one -- in the front table. So I was seated with some foreign  diplomats, police and other PH  government officials. I am sure the PNP officials beside me did not  like what  I said during  the open forum, no problem.

Had a chat with two  diplomats, Greg (?) from the Australian Embassy, and Mr. Ueno , First Secretary of Japan Embassy. He asked me about MGT, I said that we are just a small, independent free market think tank advocating  limited government. The main function of government is to promulgate the rule of law, protect the citizens' right to private property, right to life,  right to liberty, and many other functions  like endless welfarism are secondary to unnecessary functions.

A photo with Rommel (right) and Steve Cutler (middle), a bright man whose ideas in fb I follow. Steve is now a private businessman and  was  a  former  US Embassy official here in  Manila. 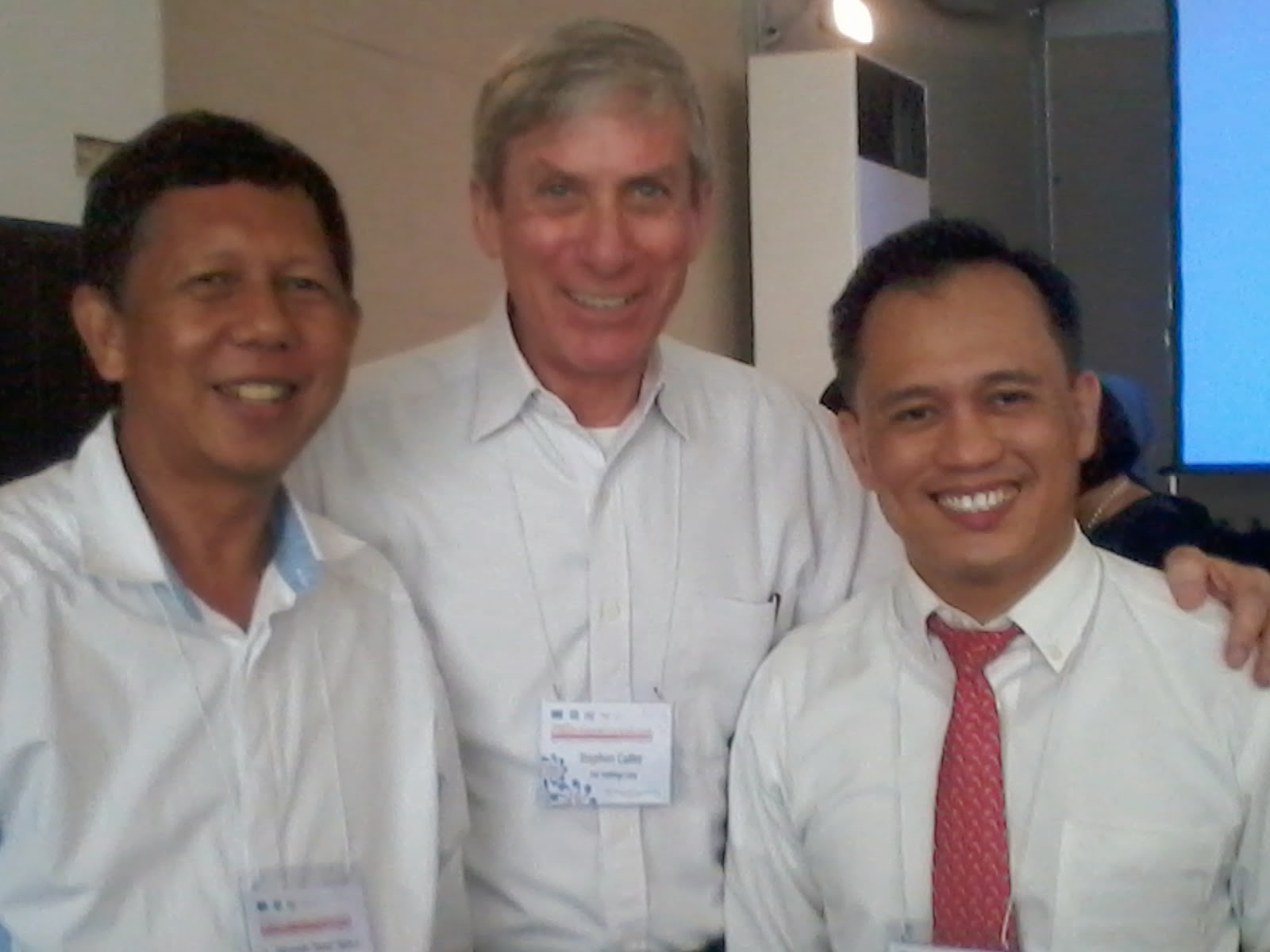 Overall, it was  a great conference. Thanks again Rommel for the invite. Do invite me again. Defense security and terrorism research is not my cup of tea but I benefit from listening to the experts in  this field, and imparting part of my ideas whenever they might fit.
---------