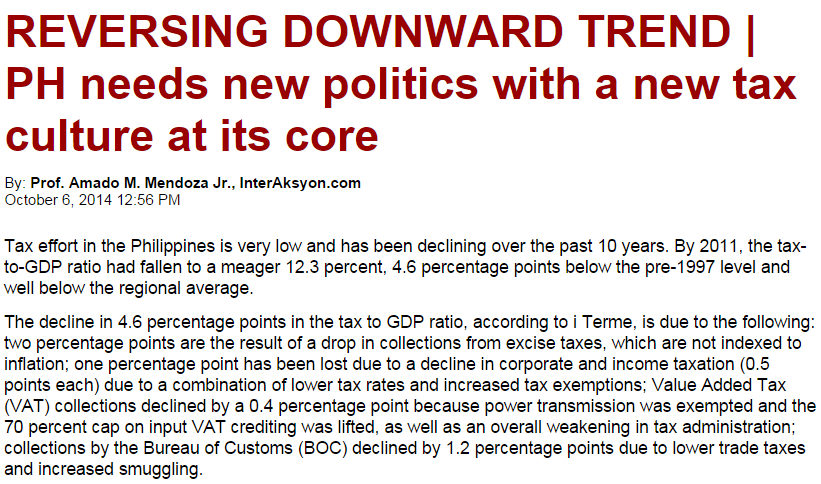 Rosa Maria Alonso  Terme. I commented that those measurements of low T/GDP ratio are wrong because such measurement counts only the collections of the BIR + BOC in computing T. It excludes other collections:

3. Collections of various fines and penalties by both national and local governments. More prohibitions in society, more violations to catch and penalize, more revenues to collect.

If these various payment to government, by hook or by hook, are included in the tax collections by BIR + BOC, a T/GDP ratio of 25 percent or higher is possible.

Singapore, Hong Kong, other governments with no or little LGUs have tax revenue that are almost equal to total revenues. In governments with many LGUs, many government corporations and financial institutions, many departments having their own collections and mandatory fees system, the total revenues are much much larger than the usual T/GDP ratio. It is an old trick by the WB, IMF, ADB, other foreign aid bodies to justify and rally a rah-rah-rah, more-taxes-rah campaign and lobbying.

Talking about government provision of public goods, the best "quality public goods" that the PH or any government can give its citizens is to have rule of law. The law rules over governors and governed, administrators and administered. The law applies equally to unequal people, no one is exempted and no one can grant an exception. Thus, the law against stealing and robbery, the law against killing and murder, the law against abduction and rape, the law protecting private property, applies to all.

Some sectors are proposing that taxes on petroleum products should be raised further. They are echoing the old WB and other foreign aid lobbying. They are wrong of course because petroleum is a useful product, it should not be penalized with more taxes. If people think that petroleum is a socially-bad product and hence, must be taxed as high as possible to discourage its frequent use, then they may be suggesting implicitly that we should ride carabaos, horses or bicycles to work or bring our kids to school so that we will use less or zero petroleum products.

But petroleum is a socially-useful product. Government should in fact reduce taxes on it, and in particular, abolish the excise tax on gasoline, only VAT, import duties and related taxes should apply.

The main arguments by those advocating for more, higher petroleum tax, are: (1) Gasoline pollutes and creates traffic; increasing the tax will alleviate these twin problems; (2) Gasoline is mainly consumed by the rich and the middle class; hence a higher tax on gasoline is progressive; and (3) Petroleum products are imported, and scarce resources.

I disagree with these arguments of course.

2. Gasoline is used by tricycle drivers, taxi drivers, and other non-rich people. Besides, what is wrong with the middle class and rich driving a car? People work hard to have more convenience in life and this is not a bad or criminal goal. Those who demonize car ownership may consider not owning or driving one and ride bicycles only.

3. All imported products from mobile phones, laptops, flat tv, buses, boats, medicines, processed foods, etc. are also scarce. The price of a product or service is a reflection of its scarcity or non-scarcity. Gold and diamond are very scarce to find and hence, their prices are very high. Air is non-scarce, it is abundant hence, its price is zero. Unless one is into scuba diving, then air in scuba tank has a price and not free.

So government should either abolish the excsie tax on gasoline, or all other imported goods should be slapped with excise tax too.

Many environmentalists and anti-capitalism activists who demonize fossil fuel capitalism are actually car-owners too; they frequently ride planes for their meetings and activities across the country or around the world. And all airplanes use that "bad" (if not "evil") product called petroleum.

Back to the basic function of government -- yes, there is a need for government. Promulgate the rule of law. Of what use to a poor man that he gets free PhilHealth card, free education for the kids, free conditional cash monthly, subsidized train rides, etc. but his tricycle or 2nd-hand jeep or car can be easily stolen by other people; or the kids can be easily abducted and raped or murdered; the small piece of land he inherited or bought can be easily land grabbed by influential people?


Protection of private property, protection of human life, government role is needed and recognized, and taxation to allow government to do this job is needed. All other functions are secondary or unnecessary, as most functions can be provided by the private sector under a voluntary exchange system. Thus, the various taxes and mandatory fees to justify those secondary or non-necessary government functions should be significantly cut, if not abolished.
-----------