When I was working at the House of Representatives (HOR) from 1991 to 1999, I would attend many Committee hearings. Among those that I followed in the early 90s was the implementation of various large-scale government (DENR, LGUs, etc.) reforestation programs in the country, funding and loans coming from the ADB, OECF (Japan government), World Bank and other foreign aid bodies. The impression I got then was that there was huge money involved, there were lots of  reforestation projects with little or even zero monitoring if the seedlings indeed became trees, or the planting was only for photo-ops, submit reports and get the money.

Year in and year out, decades upon decades, the cycle is repeated. Most or majority of DENR-implemented reforestation projects are wasteful. One example is the annual reforestation of degraded uplands adjacent to our farm in Bugallon, Pangasinan. Every year, no exception, there are tree planting there, for many years and decades since the 80s or even the 70s. And every year, the scene is the same -- degraded upland with more cogon and other tall grasses than trees. Most of the trees that survive are naturally-growing species and not planted.

Below are the "left-over" seedlings that may no longer be planted in the uplands. The DENR and its contracted cooperative or planters deposited these seedlings in our farm, to be transported and planted in the uplands. I took these photos last Friday, October 18, 2014. It is no longer advisable to do tree planting at this time of the year because the rainy season will end soon. The contracted workers who should carry these potted seedlings up to the hills and mountain simply pulled the black plastic along with the soil in it. They only carried the uprooted seedlings, so they will be lighter to carry. This practice immediately injures the roots of the seedlings and would endanger their survival in the harsh environment in the uplands. 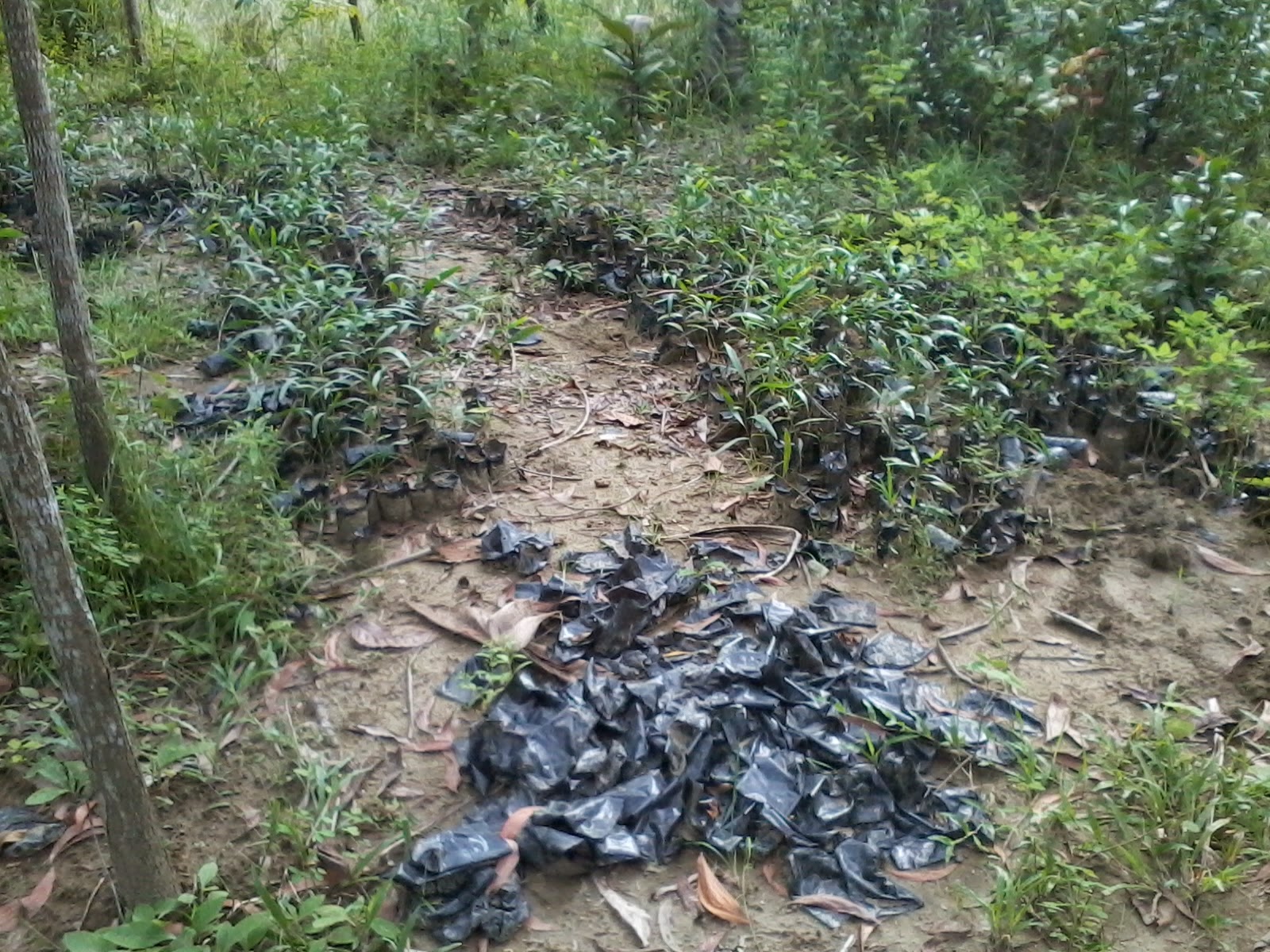 The uprooted seedlings were either planted, or they may have been thrown away, no one knows except the contracted and paid workers. These were mostly acacia auri and kakawate or madre de cacao. 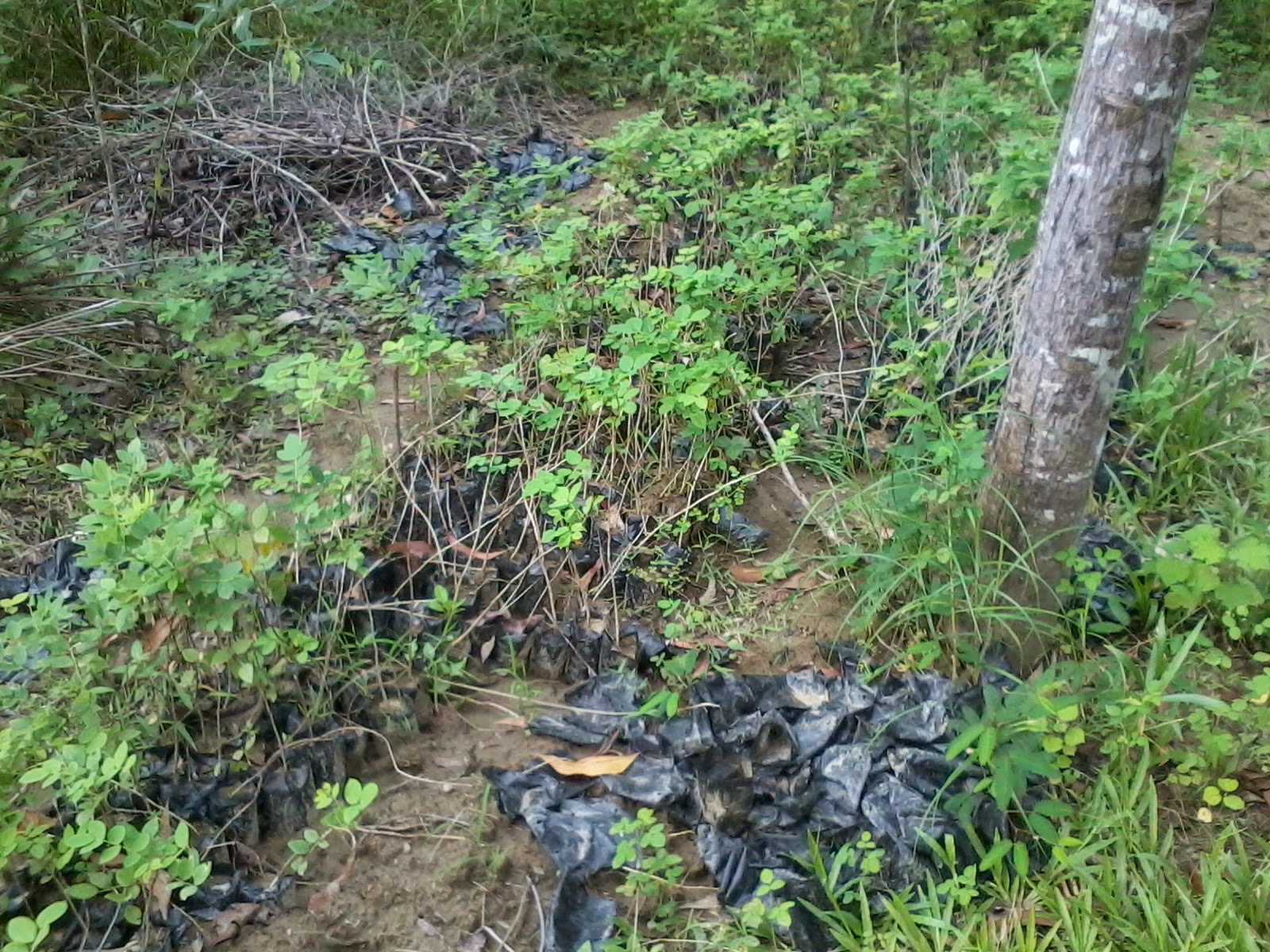 There are several hundreds, possibly a few thousands, of unplanted seedlings there. They will never be planted and even if these will be planted in the uplands, their chance of survival will be very low. The best months to plant would be in June-July as there are plenty of rains, allowing the seedlings to establish stronger roots and body. Assuming of course that the crawling and choking vines and tall grasses around them are cleared regularly. 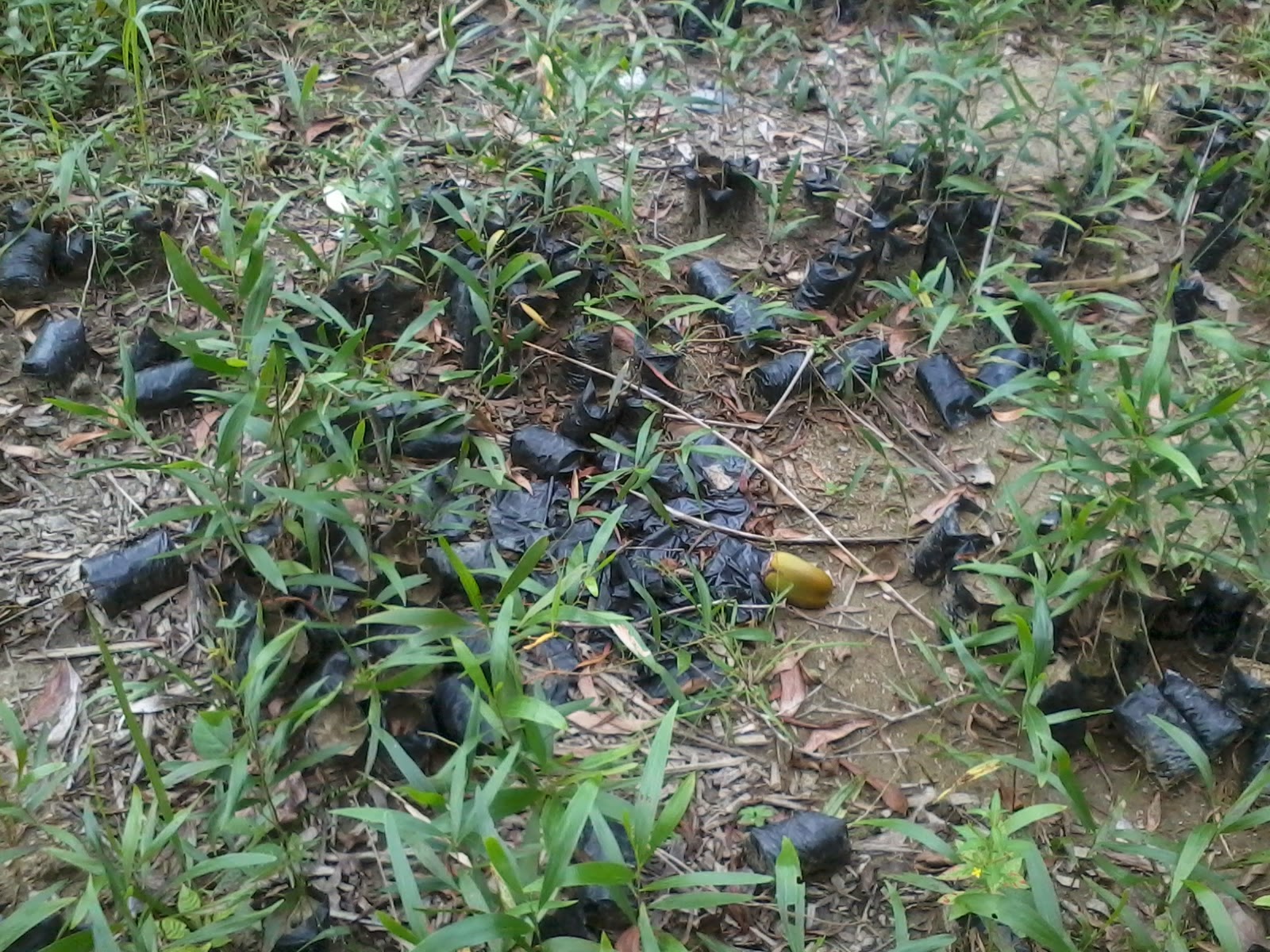 I do not know how much money was spent by the DENR, or by some foreign aid agencies that give grants or lend money to the PH government to be implemented by the DENR and LGUs, for this project alone. 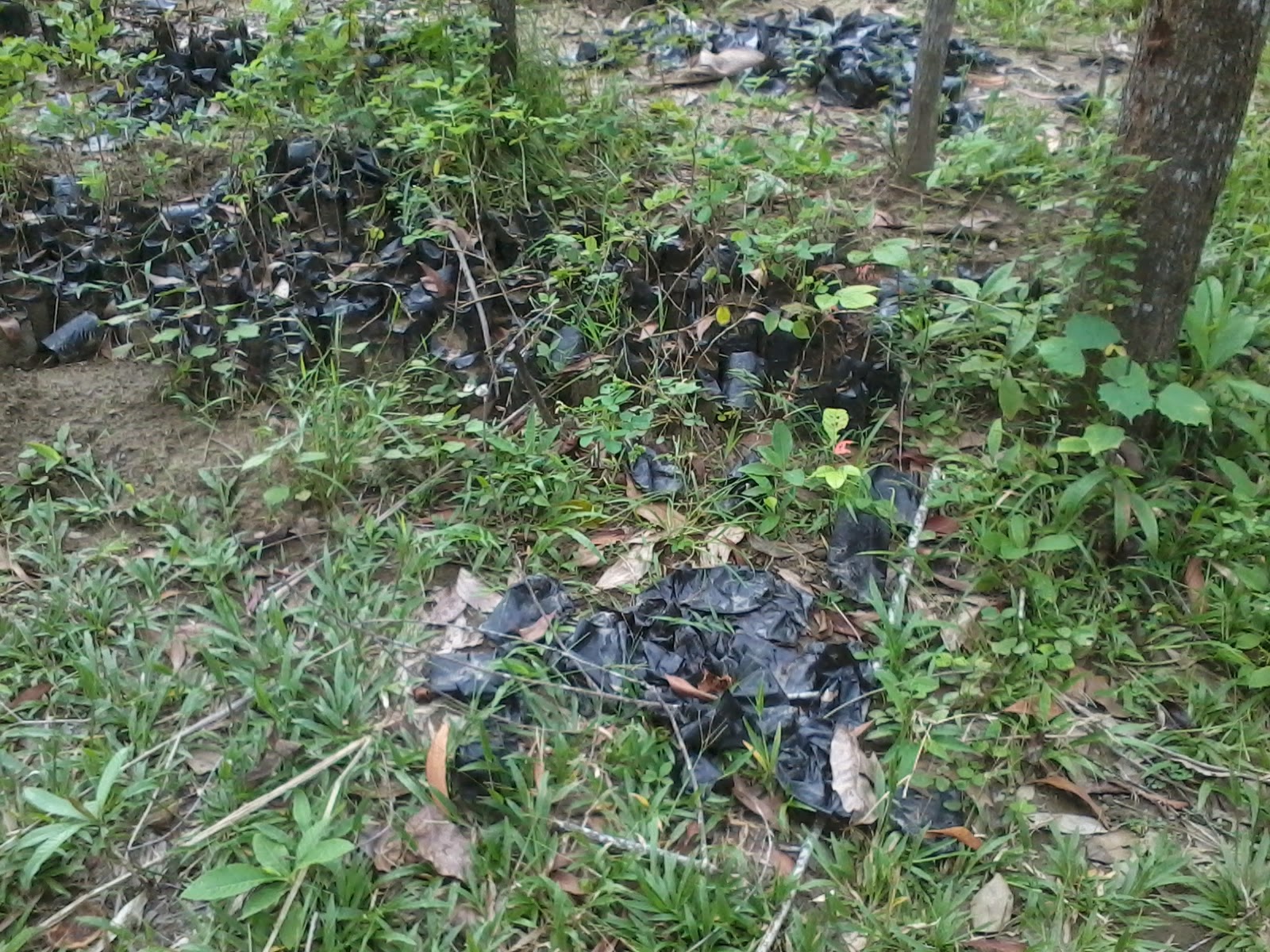 Despite annual government reforestations and tree planting programs (DENR, LGUs, other agencies) in the uplands of this part of the country for decades, the uplands and public "forest land" remain degraded. Photo below I took April this year, just adjacent to our farm. 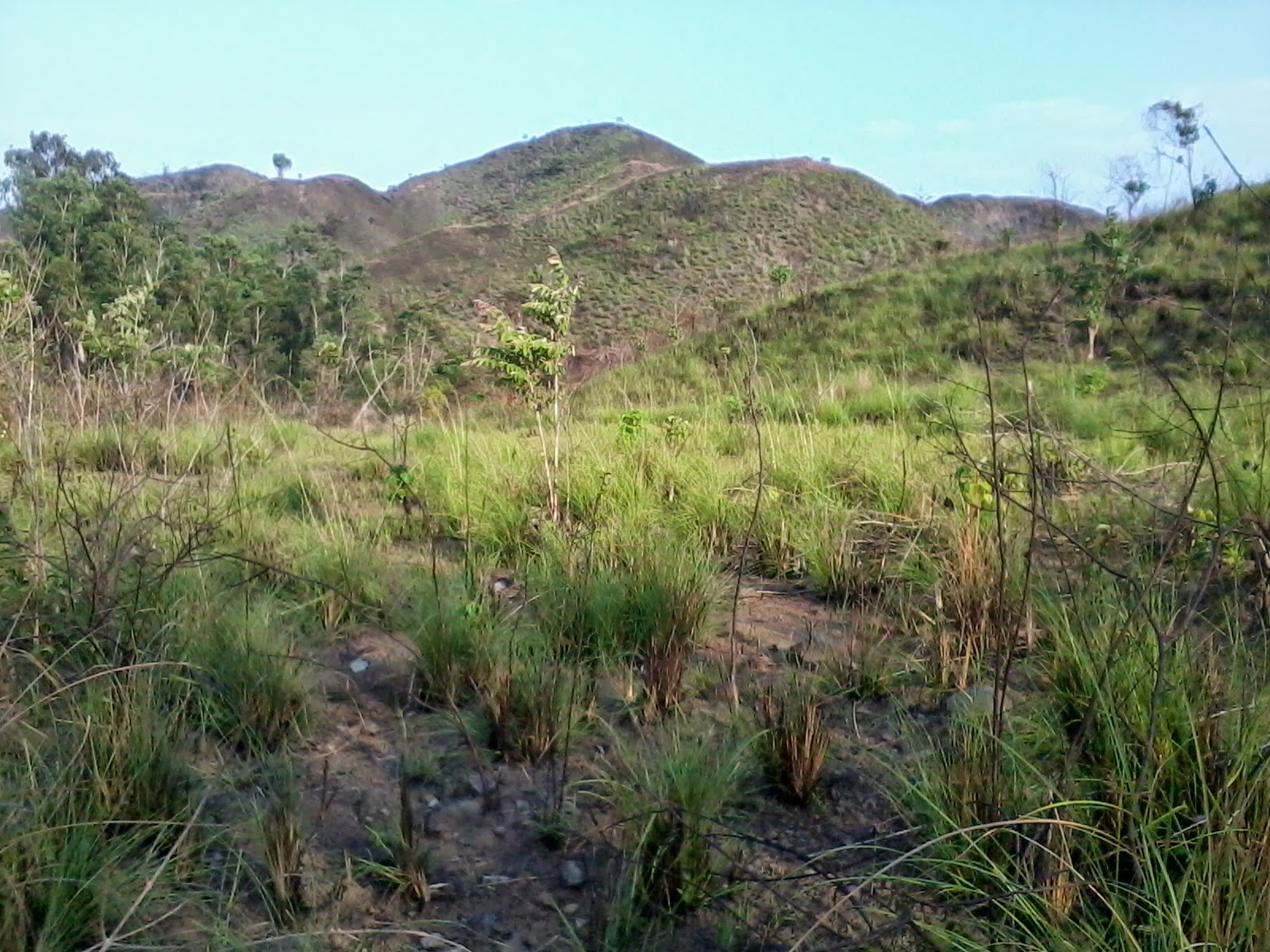 Top tree killers in the uplands are (a) choking vines, (b) grass fires occurring almost yearly, and (c) people who steal and cut the trees for charcoal, firewood, lumber and other uses. Below, another part of the "public forest land". 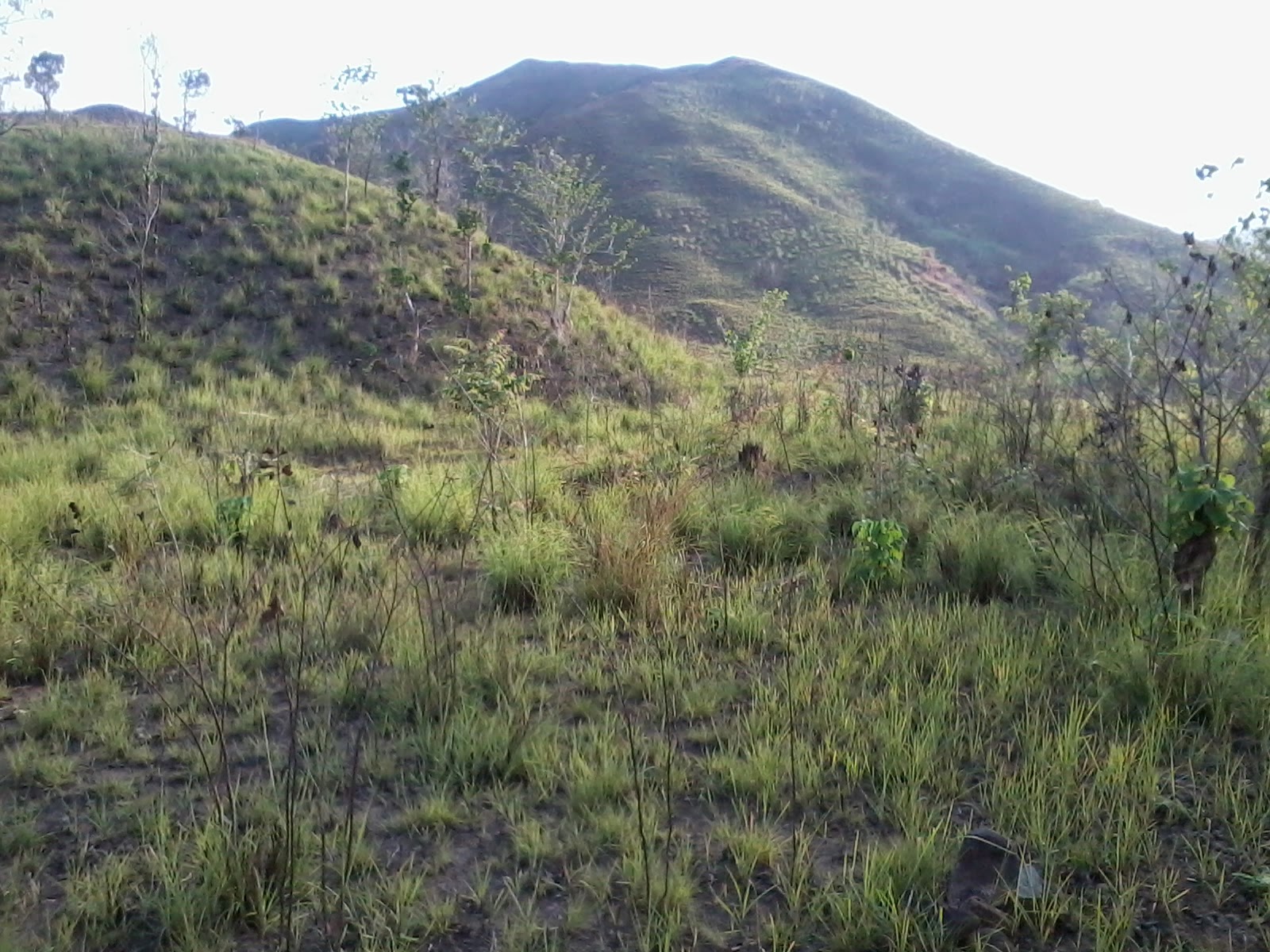 In our region, here are people's organizations who are already earning income from their labor; harvesting om schedule basis their trees planted in production areas (where harvesting of planted trees are allowed). 30% of the gross proceeds are returned to the government coffers.Part of their proceeds are set aside for reforesting the harvested areas.