Business 360 19: Investments and Inequality in Asia Accumulated savings become investments. And these in turn expand economic output and create new jobs, or expand the productivity of those  who already have jobs. Such is the beauty of continued investments and savings accumulation.

In many recent social literatures though, including those coming from the multilateral institutions and foreign aid bodies, there is growing disapproval if not outright  contempt, of rising inequality within and among nations as they grow  faster, as they attract more investments and expand economic production. Thus, the repeated call for “inclusive growth”, previously called as “growth with equity” or “broad-based growth”.

Such restrictions make some foreign investors find other ways to come in and do business. Like having local dummies, so foreign money is able to penetrate even  in sectors that is explicitly reserved for the local investors. But many foreign investors do not like that arrangement as it lacks transparency, and they cannot report to their shareholders and regulators in both home and host countries that they have invested in companies that are supposed to be 100 percent locally-owned.

The next route for foreign investors is via the stock market. Not all of such market capitalization is foreign-owned of course, there are also many local investors in each country. Here are the figures for major Asian economies. 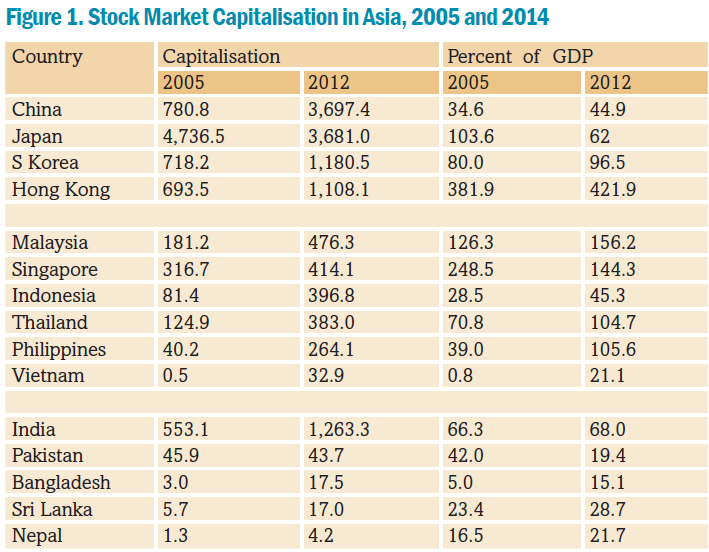 North East Asia except N. Korea is generally developed. The economies there are able to attract plenty of domestic and foreign investments that create plenty of higher productivity jobs.

South East Asia generally are emerging economies, except Singapore which is already a developed economy, and the three catching up economies of Laos, Cambodia and Myanmar.

In terms of FDIs in South Asia, the levels remain very low on average, except for Maldives.

There is a need to encourage more investments, local and foreign, in stock market and FDIs, to Asian economies. Investments not only refer to money. They also include tools and machineries, technology and processes, research and development, managerial skills and marketing initiatives.

Social and economic  inequality is inevitable as people have different goals and ambitions in life, different network and exposure in business, use different technology and managerial styles.

What is important is that opportunities should be available for the people so they can manage their lives and career. The business climate in Asian economies should become more friendly, more accommodating to investors, local and foreign. People can decide to be hardworking or lazy, be ambitious or complacent, if different jobs have become more available in their countries and communities. 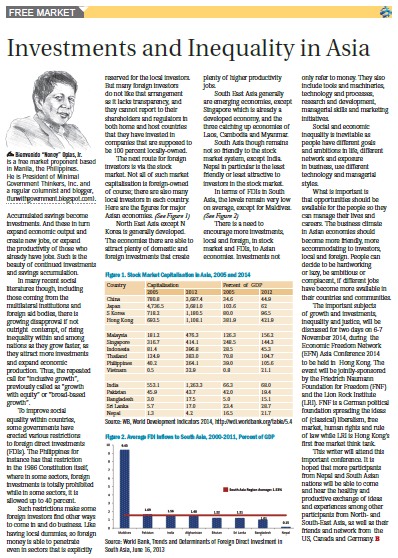 The important subjects of growth and investments, inequality and justice, will  be discussed for two days this  coming November  6-7, 2014, during  the  Economic Freedom Network (EFN) Asia Conference 2014 to be held in  Hong  Kong. The event will be jointly-sponsored by the Friedrich Naumann Foundation for Freedom (FNF) and the Lion Rock Institute (LRI). FNF is a German political foundation spreading the ideas of (classical) liberalism, free market, human rights and rule of law while LRI is Hong Kong’s first free market think  tank.

This writer will attend this important conference. It is hoped that more participants from Nepal and South Asian nations will be able to come and hear the healthy and productive exchange of ideas and experiences among other participants from North- and South-East Asia, as well as their friends and network from  the US, Canada and Germany.
----------