Free trade is part of human nature. People may oppose it philosophically but consciously or unconsciously, they are engaged in it. Even militant protectionism crusaders are still humans, they need to eat, and they want free choice where to eat.  Do not go to restaurants that are too expensive for their budget, never go back to a resto which may be cheap but the service is too annoying. They want to be served well given their budget, or they may endure bad service in exchange for really cheap food. That is the beauty of voluntary exchange, no one is forced and coerced to give his/her money to people who do not provide their specific needs. That is the beauty of free trade.

Some countries and economies have taken the unilateral trade liberalization route -- Hong Kong, Singapore, Dubai, Chile, among others. And have good results. Chart below shows that as of 2001, average tariff in S. America was around 12 percent vs around 4 percent in East Asia, zero already in Singapore. East Asians are more receptive to unilateral trade liberalization than their counterparts in S. America or Africa. 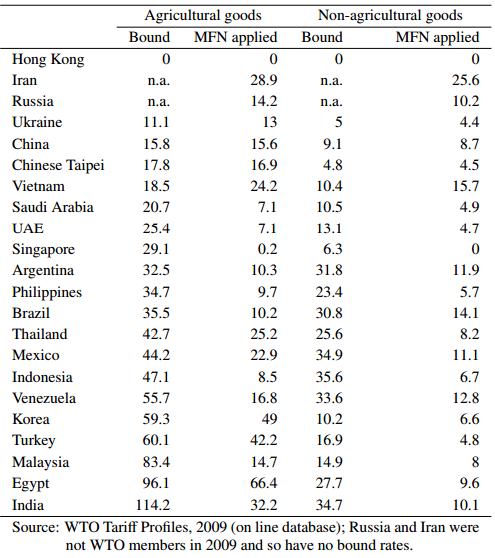 When it comes to agricultural products though, economies in general are more protectionist even if they may be relatively free traders in non-agri products. Stark cases are Korea, Turkey, Egypt and Thailand.

The exceptions to this agricultural protectionism are the unilateral Asian free traders HK and Singapore, and some countries in S. America, Argentina and Brazil. Data also from R. Baldwin.

In this working paper at the WB, Nogues argued that "Developing countries would gain far more from unilateral than multilateral trade liberalization negotiations over many years." Two groups of people dislike unilateral trade liberalization. The first is the group of some local business (like cronies) and political  interests (trade unions, big farmer organizations). The second is the group of government trade negotiators and consultants (including academics), they do not want to lose their perks of frequent global junkets flying to many countries and flashing or exotic cities doing all sorts of trade bargaining that last for many decades. Consultants get huge amount of money justifying restrictions to trade, explicit or implicit; economic or social or environmental.

Ordinary consumers and independent researchers, them who are not corrupted by government and foreign aid money and consulting, should push the logic of unilateral trade liberalization. Ordinary consumers benefit from more choices, more options, where to buy and whom to sell.
------------