"As a result, today’s German power grid has become a precarious balancing act, and keeping it from collapsing under the load of wild fluctuations has become a real challenge. At the European Institute for Climate and Energy (EIKE) here, Dr. Klaus Peter Krause writes a piece titled: Always on the brink of a widespread blackouts, where he writes how and why Germany’s power grid has become extremely vulnerable:

Already 3500 emergency grid interventions per year – According to the TAB report of 2011: More than a couple days of blackout would be a national catastrophe – Germany sacrifices its uniquely reliable power supply for the ‘transition to renewable energy’.” 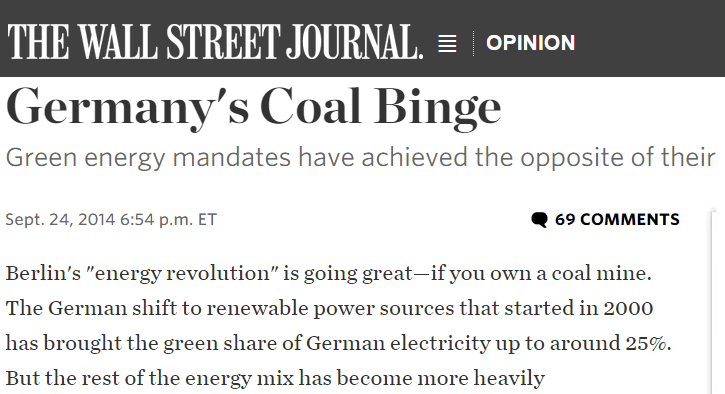 "Berlin's "energy revolution" is going great—if you own a coal mine. The German shift to renewable power sources that started in 2000 has brought the green share of German electricity up to around 25%. But the rest of the energy mix has become more heavily concentrated on coal, which now accounts for some 45% of power generation and growing. Embarrassingly for such an eco-conscious country, Germany is on track to miss its carbon emissions reduction goal by 2020.

Greens profess horror at this result, but no one who knows anything about economics will be surprised. It's the result of Chancellor Angela Merkel's Energiewende, or energy revolution, a drive to thwart market forces and especially price signals, that might otherwise allocate energy resources. Now the market is striking back.

Yet by diverting demand to renewables, the tariff deprives traditional generators of revenue and makes it harder for them to forecast demand for thermal power plants that require millions of euros of investment and years to build. No wonder utilities favor cheaper coal plants to pick up the
slack whenever renewables don't deliver as promised."

In  one facebook group about energy, I continue to debate some anti--coal, anti-fossil fuel energy activists. One lady, Ms JL commented that "with coal energy you get all kinds of problems from coal mining to hauling to preparation of coal fired power plant to energy generation to post combustion wastes..."

The same applies to wind and solar. This article from the Hockeyschtick, January 25, 2014,
Ten reasons why intermittent wind & solar power are a problem, not a solution noted that

"Both wind turbines and solar PV use rare earth minerals, mostly from China, in their manufacture. Mining and processing these rare earths generates a tremendous amount of “hazardous and radioactive byproducts.”

If we were to try to increase wind and solar by a factor of 10 (so that they together amount to 12% of world energy supply, instead of 1.2%) we would need huge amounts of rare earth minerals and other polluting minerals, such as gallium arsenide, copper-indium-gallium-diselenide, and cadmium-telluride, used in making thin-film photovoltaics..."

Have the subsidize-wind-solar crusaders considered how many million tons of metallic and non-metallic minerals have to be mined on the ground to produce steel and cement to erect wind towers alone? Those towers are not made of wood or bamboo. Plus mining of rare earth materials to produce solar PV and wind turbines, plus more metallic materials to produce the bearings in wind plants, batteries for solar. 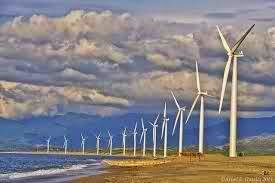 Notice also that in wind farms like in Bangui, Ilocos Norte as shown in this photo, there are no houses, no fishing village, no resorts, no other economic activities. They look cute for photography then posting in social media, but what about other people's livelihood?

Such other livelihood and human settlements have to be sacrificed because those wind towers can collapse, or the wind turbines can burn, or the wind blades can fall down. There are many instances abroad that any of these have happened. 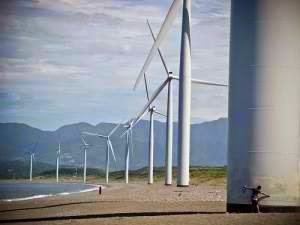 See how big each tower is. The person's body in the photo looks like 1/20th the diameter of the tower base. Consider also how huge, how deep and wide the base, that part of the tower deep under the sand and not visible. I am not an engineer so I would't know how many trucks or tons of cement and steel are needed just to build one tower. 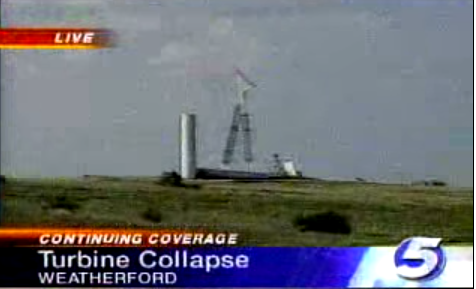 And this youtube clip is one example why when there are windmills, there should be no houses, no resorts, no schools, no other human structures near them. Some don't even have farms beside these giant structures. This is in the US.

JL replied that
"There should also be no houses no resorts, no schools no other human structures near the coal mining and the coal fired power plants?".

Her fear is imaginary. If one will visit places near Sual plant in Pangasinan, Masinloc plant in Zambales, Quezon plant in Mauban, Quezon, Calaca plant in Batangas, etc., one will not see black smoke as often shown by the anti-coal activists. The decision to put windmills in areas where there are no houses, no fishing village, no resorts, etc. is made by the wind power developers themselves, not by the government (DOE or LGUs) or the environmental activists. The wind developers know the real danger of those windmills collapsing. It is also possible that they relocated original poor seaside villagers so that those huge wind towers can be constructed.

Poor or middle class communities and LGUs cannot afford to have those commercial and huge windmills. Most likely they cannot even afford to have a good, well-cemented roads, how can they afford those  expensive towers? 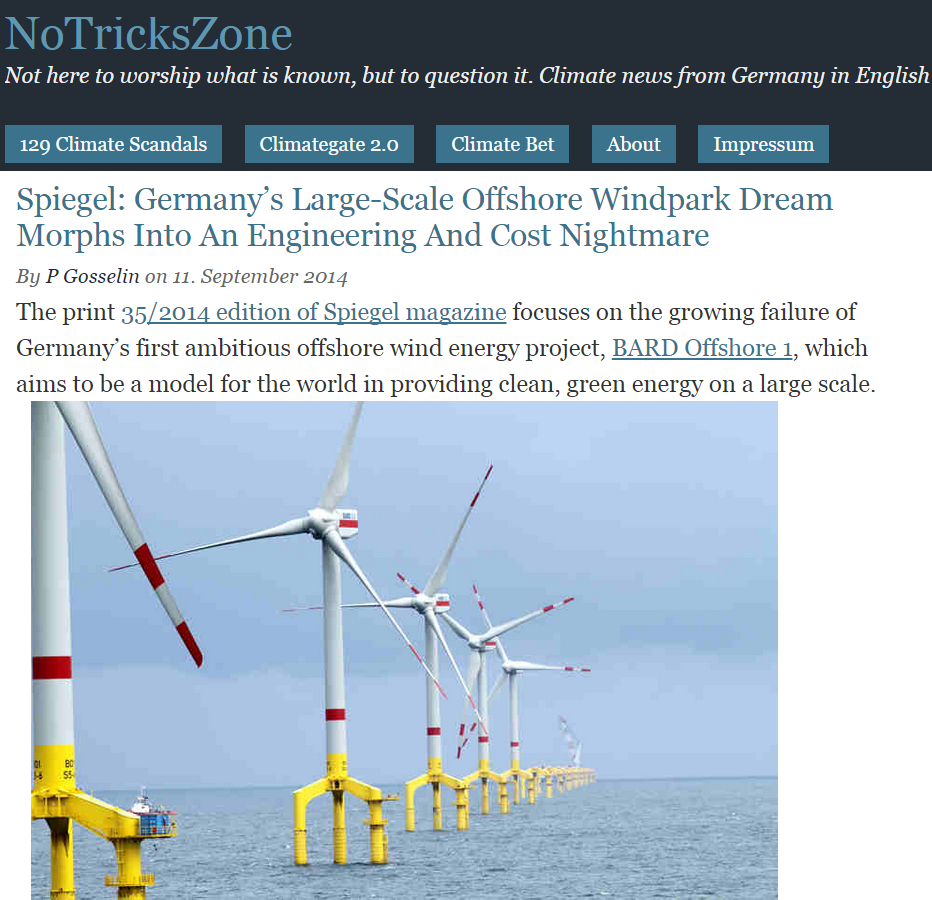 In Germany, to avoid such danger of collapsing wind towers to people and their houses or farms, they built huge, monster wind farms offshore, supposedly to generate 5MW each tower. As this story from NTZ will show, the result will make the subsidize-wind supporters cry.

So if one is so concerned about any environmental damage of coal mining, then steel and cement mining to build many wind towers should also concern them. 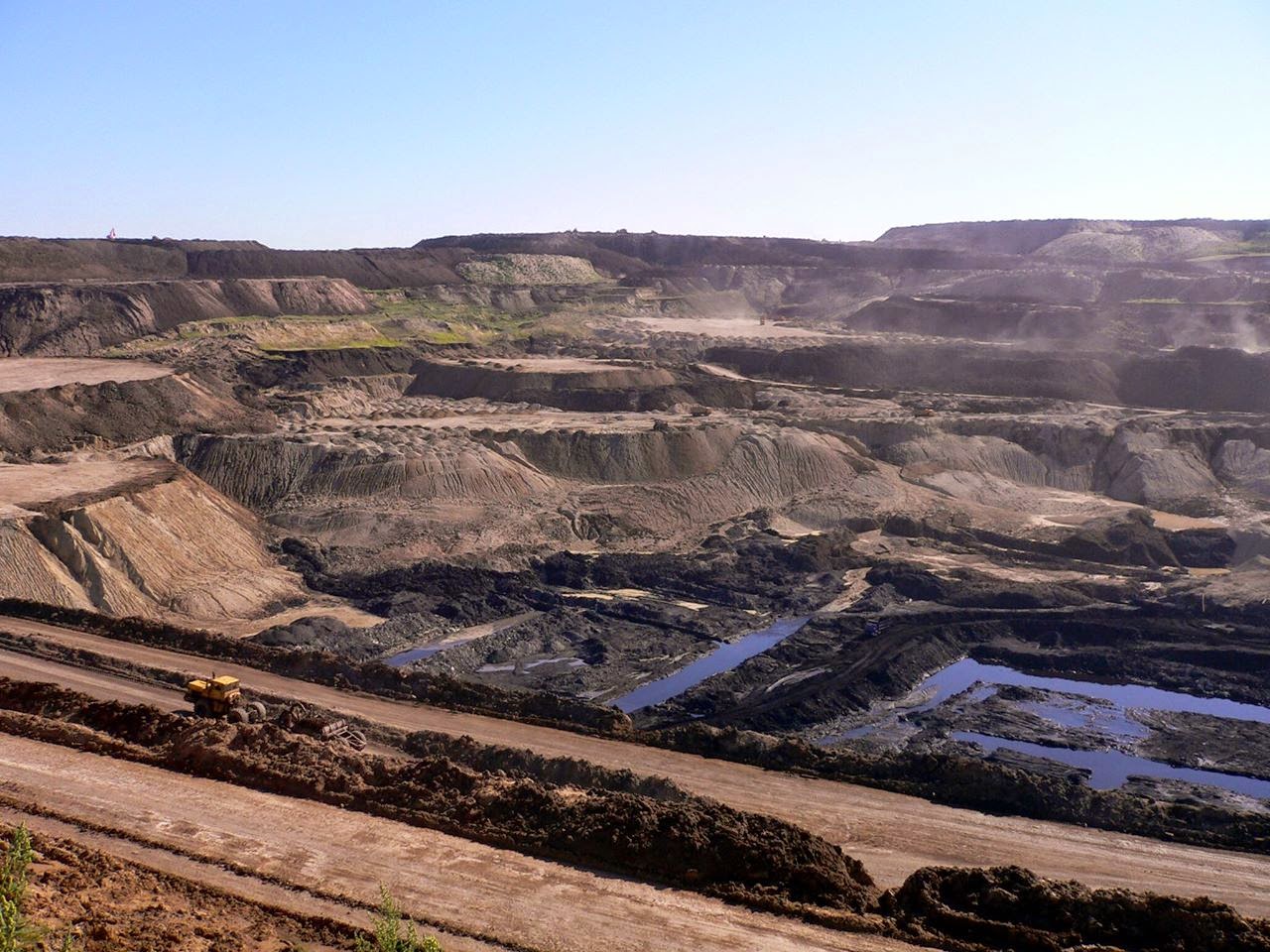 Some anti-coal activists post this “ugly photo” of coal mining. The discussion and debate should focus on power plants, coal and wind in particular, and not mining. But some activists keep raising the "ugliness" of coal mining, fine.

Then mining of iron, etc. to produce steel, mining of lime, etc.to produce cement, should concern them too.  No wind tower can be built without cement and steel. 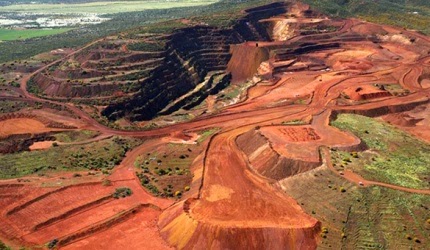 If people have to demonize mining of one metallic or non-metallic product, coal in this case because of its environmental damage, then they  must demonize mining of other products that cause environmental damage as well. This is iron mining. Do the subsidize-wind promoters demonize iron mining, lime and cement mining that help build wind towers? Double talk is ugly and hypocrisy.
-----------