China is initiating the formation of ASIAN INFRASTRUCTURE INVESTMENT BANK (AIIB) to cater to roads, railways, power plants, telecoms in Asia. We don't love China but this competition to WB, ADB, IMF gives us better prospects, I believe. AIIB will prioritize hiring Chinese professionals, of course, but still it's able to increase demand effectively.

I thanked Aiken for such heads up. I googled AIIB and here are some interesting news. 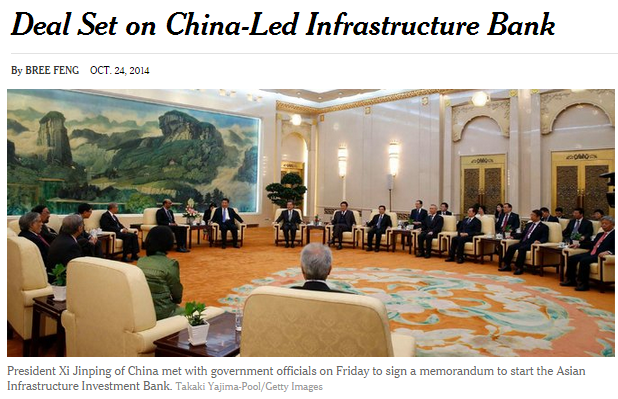 "China and 20 other countries signed a memor-andum on Friday agreeing to create an international development bank that Beijing hopes will rival organizations like the World Bank....

Japan, Australia, South Korea and Indonesia were not represented at the signing ceremony for the bank, the Asian Infrastructure Investment Bank, in Beijing. India joined the bank, along with Malaysia, Thailand, Vietnam and the Philippines,..." 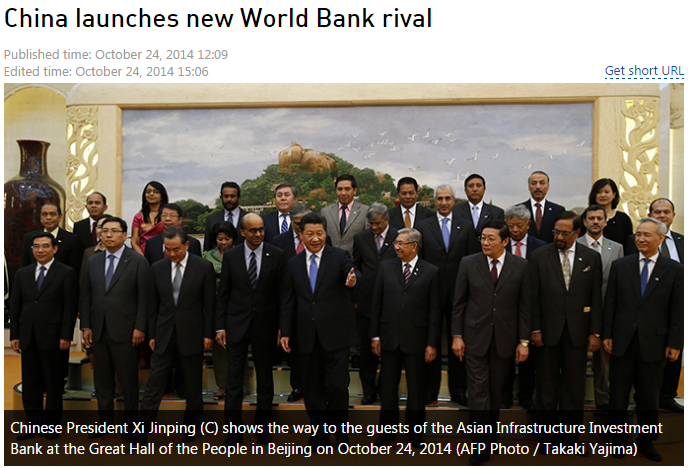 China and India are backing a 21 country $100 billion Asian Infrastructure Investment Bank (AIIB) to challenge to the World Bank and Asian Development Bank.

Memorandum of understanding were signed with 21 Asian countries in Beijing Friday. Australia, Indonesia and South Korea were absent following hidden pressure from Washington.

The development bank was proposed a year ago by Chinese President Xi Jinping, and is to offer financing for infrastructure projects in underdeveloped Asian countries.

The bank will initially be capitalized with $50 billion, most of it contributed by China. The country is planning to increase authorized capital to $100 billion. With that amount the AIIB would be two-thirds the size of the $175 billion Asian Development Bank.

"Australia has been under pressure from the US for some time to not become a founding member of the bank and it is understood Mr. Kerry put the case directly to the prime minister when the pair met in Jakarta on Monday following the inauguration of Indonesian President Joko Widodo," the paper said. 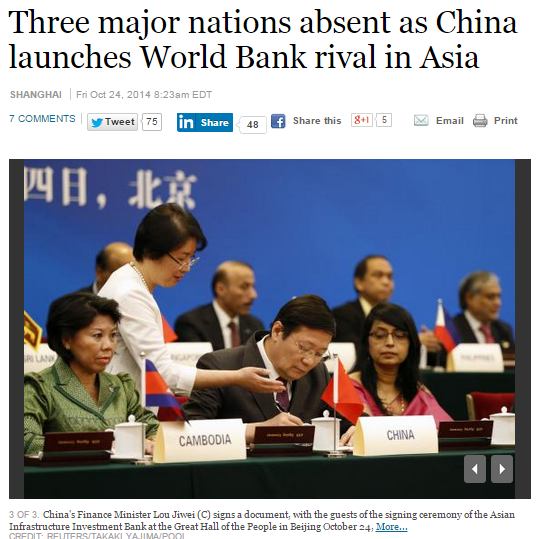 The memorandum of understanding signed on Friday said authorised capital of the bank would be $100 billion and that the AIIB would be formally established by the end of 2015 with its headquarters in Beijing, state news agency Xinhua said….

The ADB, created in 1966, offers grants and below-market interest rates on loans to lower to middle-income countries. At the end of 2013, its lending amounted to $21.02 billion, including co-financing with other development partners.

China has a 6.5 percent stake in the ADB, while the United States and Japan have about 15.6 percent each.

Conceptualized in October 2013, signed in October 2014, only one year preparation and the AIIB became a reality? Wow.  And it will be formally established by end-2015, same date as the materialization  of the ASEAN Economic Community (AEC).

For me, these signal two things:

(1) The doves in the China Communist Party (CCP) are grappling, if not winning over the hawks. Befriending Asian governments, not alienating or fighting them.

(2) Instead of RCEP, China is using AIIB in countering US initiatives at US-Asia trade integration via the Trans Pacific Partnership (TPP). AIIB can be a back-door or side-door China-other Asians trade integration.

I am not a fan of the CCP and the corruption and  dictatorship  that they practice, but I think this is a better development. More trade, commerce, loans, not more jet fighters, battle ships, submarines. Let business, trade, money and foreign diplomacy do the talking, never the jet fighters and the Generals.

Foreign aid by nature is government to government, so politics is 100 percent part of the equation. Thus, the AIIB can be the big Asian-government-bribery department of Beijing. All loans will have strings of course, like using Chinese consultants, engineers, suppliers, etc.

I think it is part of the internal debate or conflict within the CCP. The dovish say, "Let us be rich via trade, commerce and AIIB" while the hawkish say, "Let us be rich via territorial occupation, get those natural gas and petroleum deposits in offshore East Asia." Both camps are corrupt of course, but still, we will have distance from the China war mongerers, including PH war freaks here who want Filipino taxpayers to send them billions of $ for the jet fighters, battle ships, submarines that they are pushing to the PH government.

I dislike BIG government, communist or democratic. But between corruption and bribery via foreign aid (whether WB or ADB or AIIB loans) and corruption and large scale defense spending via militarization and territorial grabbing/defense, the former is preferable. Choosing a lesser evil.
-------------