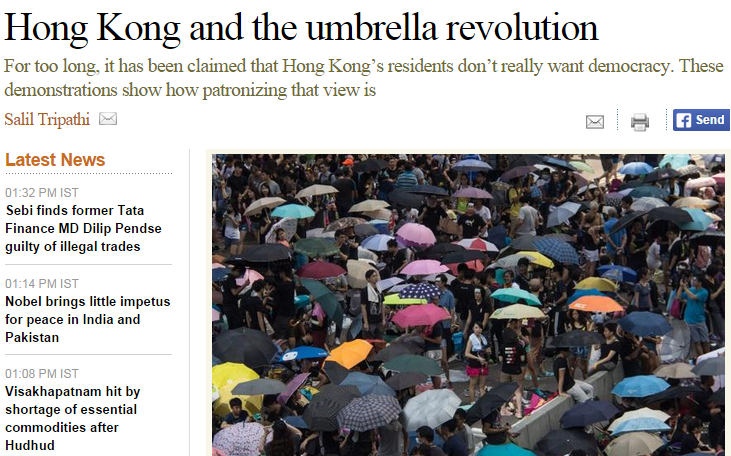 "Wang Zang is a Chinese poet who was taken into custody in Beijing on 1 October because he posted a photograph of himself holding an umbrella on the Internet. The umbrella has emerged as the unlikely icon of demonstrations in Hong Kong...

… each year on 4 June, when thousands of Hong Kong residents unfailingly congregate at Victoria Park and hold a candle-light vigil, remembering Tiananmen. China doesn’t like it but doesn’t do anything about it. This is partly due to that Basic Law, which is meant to protect Hong Kong’s character for 50 years....

Perhaps the unanticipated outcome of these demonstrations is gradual transformation in the way China’s leadership wields power. China reviled and insulted Hong Kong’s last British governor, Chris Patten, who said that the only way to deal with China is by treating it like any other country. If it glares angrily, stare back. China respects strength in its rivals, not acquiescent kowtowing. Patten had limited time in China, but he succeeded in broadening the political space. By staying firm on their demands, the demonstrators in Hong Kong are doing the same.

The outcome isn’t assured. Hong Kong might become another Chinese city. Many think it already is. Or China might become a bit more like Hong Kong. We do live in interesting times."

Why should Asians accept the Western religion of democracy? One place that has reduced wretchedness is not democratic India, but dictatorial China. And HK and Singapore are among the freest places in the world despite not being democratic.

I understand some ramblings against democracy, that majority rule can ultimately lead to majority dictatorship, the 50% + 1 of the population can wield dictatorship over the 49%+. I support some of those sentiments actually. I find this thesis on democracy by Barun as brilliant. He wrote,

Democracy is not about majority rule, but about recognition of and respect for minority opinions. So that the minority view of today, may enjoy the freedom to peacefully persuade others, and could become a majority opinion of tomorrow.... For democracy to survive in large communities and countries, where only representative democracy is possible and practical, democracy has to be minimal, so that it does not offend or alienate too many people. Secondly, as societies become complex, there is a need to recognise the challenges of centralised government, and devolve greater political authority and autonomy to lower tiers of government and local communities. Because only at such community level, with shared values, can there be a realistic prospect for widest consensus on such complex issues.

Right. As economies become more prosperous, people become  more impatient with dictatorship  and authoritarianism. Democracy is not be-all and end-all for them, but the freedom of expression available under democracy is a lot more preferable than the unfreedom and self-censorship of undemocratic but rich economies like HK and Singapore. The Singapore government is more flexible and more sophisticated in its political dictatorship than that in HK or China. But there are several signs of discontent looking for more sophisticated outlets there.

If the answer is No, then there is self-censorship.

The HK demonstrators, including friends at the Lion Rock Institute (LRI) reject the status quo, that all major political issues must get approval  from Beijing. There has been a slow but steady reduction of free market culture in HK under the status quo. Friends at LRI and Momentum 107 have protested the huge tax hike of real properties in HK that has been implemented several years ago. They did not support the creation of a new bureaucracy, the Fair Trade Commission, which I think has been created already. They did not support the enactment of minimum wage law in  HK.

HK under the status quo is following Beijing footsteps. The protesters want a break from Beijing, to get out of China Communist Party delegated dictatorship as much as possible. The status quo  is leading towards bigger government in HK. The Democracy movement, though not a monolithic ideological movement, has elements unsupportive of more, bigger HK government.

Good posting by LRI . Exec. Dir. Peter Wong last Sunday with a link to an article by The Economist, What’s gone wrong withdemocracy,

The rise of  China which threatens democracy is nonsense. However, "one reason why so many democratic experiments have failed recently is that they put too much emphasis on elections and too little on the other essential features of democracy. The power of the state needs to be checked, for instance, and individual rights such as freedom of speech and freedom to organise must be guaranteed. The most successful new democracies have all worked in large part because they avoided the temptation of majoritarianism—the notion that winning an election entitles the majority to do whatever it pleases."

Hong Kong (and many other countries or economies) needs more democracy than ever. Democracy is good, not bad or unhealthy, for Asia. Freedom of expression without the use and advocacy for violence and aggression is more needed now. When governments use more force and coercion, explicit or implicit, by police or court harassment to limit freedom of expression, that means governments are getting bigger and becoming more allergic to protecting individual rights and liberty.
------------