Last night, Friedrich Naumann Foundation for Freedom (FNF) Philippines Country Director Jules Maaten conducted and hosted a "whisky workshop". My first time to attend such kind of activity as I am a barbarian when it comes to some high end drinks, European whisky brands. It also served as Jules' farewell party to some friends. To my right here will be his successor, incoming Country Director Wolfgang BL Heinze. 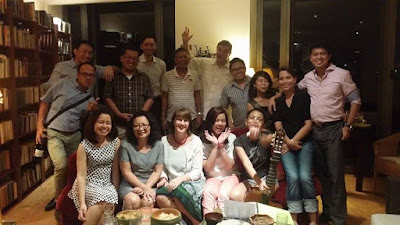 I talked to Eva, Jules' wife, she said she wished they won't leave the Philippines because of so many friends they have developed the past 6 years (though it seemed like 3-4 years ago when Jules came here to replace Siggi Herzog who became a Regional Director of FNF). But she's looking forward to a new adventure, new friends in S. Africa, Jules will be overseeing FNF's work in several countries south of that continent, many of which are really economically undeveloped and politically repressed. Injecting the philosophy of economic freedom and individual liberty in the  minds of the people and politicians there will be a tough job.

Another pose. L for Leni Robredo and the Liberal Party (LP). 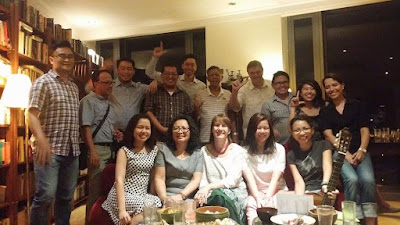 The other guests that night, mostly Europeans, have already left when this group photo was taken. The workshop consisted of Jules discussing each bottle, their  properties and taste, where they are produced, then people taste it, fellowship. After about 10 minutes, Jules calls the crowd again  to discuss the next bottle. 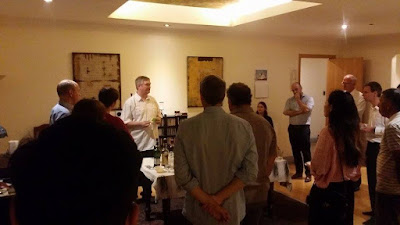 I think this is the "amoy sapatos" whisky that Jules discussed. 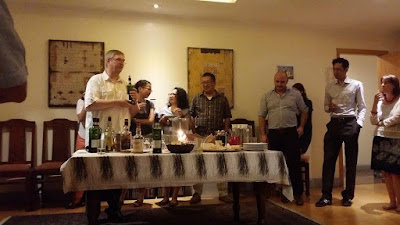 I tasted almost all of them, in small quantities + water. Being a non-whisky drinker, I found their taste and smell ranging from strong to exotic to weird. Especially the "amoy riot" or smelling like burned tires on the road. :-) 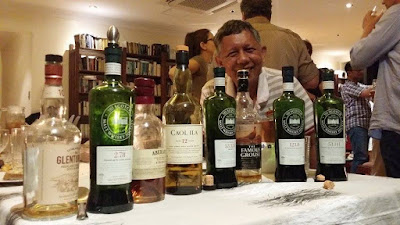 Later I shifted back to beer. Good that Jules has a stock of San Miguel pilse at the fridge. Below, Mikael de Lara and Samuel's daughter leading the guitars and songs. U2's "with or without you", others. 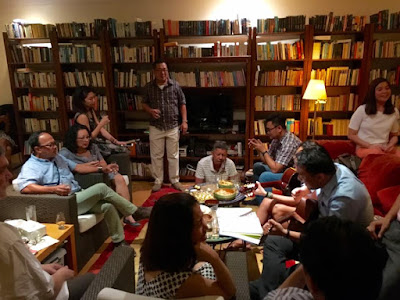 Before leaving the place, almost 12 midnight, I gave an unsolicited, impromptu speech discussing the role of FNF in general, and Jules in particular, in my field -- the free market think tanks and NGOs in Asia through the Economic Freedom Network (EFN) Asia. FNF is known more for helping liberal and democratic political parties like the LP via the Council of Asian Liberals and Democrats (CALD).

Posted by Bienvenido Oplas Jr at 10:59 AM