I am reposting this good article by a good friend, Philip. Enjoy. 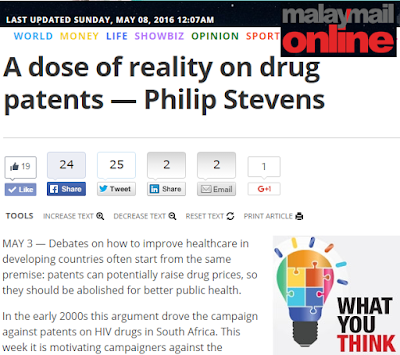 MAY 3 — Debates on how to improve healthcare in developing countries often start from the same premise: patents can potentially raise drug prices, so they should be abolished for better public health.

In the early 2000s this argument drove the campaign against patents on HIV drugs in South Africa. This week it is motivating campaigners against the Regional Comprehensive Economic Partnership in Asia — a proposed Free Trade Agreement between 16 Asian countries that may impose new intellectual requirements.

NGO disquiet about drug patents has even led to the creation of a UN High Level panel on access to medicines, due to report its recommendations in New York next month.

Such concerns may in fact be overblown. This is an implication of an interesting new study by researchers at the University of Ottawa and published in April by the World Intellectual Property Organization (WIPO) in Geneva.

To better understand how patents impact access to medicines, the researchers counted how many of the World Health Organisation’s (WHO) List of Essential Medicines are subject to patent protection in developing countries. This list contains 375 or so medicines considered most important by WHO experts.

It’s a hugely influential list, and one based purely on the clinical usefulness of a medicine, not cost or patent status. Developing country governments and large international donors use it to guide which medicines they will procure.

The researchers checked national patent registries in developing countries and double-checked with manufacturers. They found that patents for 95 per cent medicines on the list had expired.

Put simply, patents are not relevant to the vast majority of drugs typically used by physicians in developing countries.

Most of the remaining 5 per cent of medicines — around 20 products — on the WHO list with patent protection are for HIV/AIDS. But patent owners either don’t register or enforce their patents in the poorest countries. For middle-income countries, manufacturers often enter into voluntary licensing deals with generic manufacturers to broaden access, meaning there are cheap generic copies on the international market.

The one medicine with no generic equivalent is the cancer drug, bevacizumab (marketed as Avastin by Swiss patent-owner Roche). This modern so-called ‘biologic’ drug is used against many cancers, and works by starving tumours of their blood supply through blocking a key protein.

Patented or not, these biologic drugs are difficult for generic competitors to copy cheaply.

Unlike most drugs, which are chemically synthesised and made from just a few  molecules, biologic drugs are manufactured in living systems such as plant or animal cells, and have complex molecular structures. Their manufacture demands significant investment and technical know-how, meaning such drugs will never be as cheap as, say, generic aspirin.

One implication of the study is that if patents were abolished tomorrow it would make little difference to the cost or availability of most medicines used in developing countries.

Even so, these medicines are frequently unavailable in public health systems.

In 2014, researchers at the University of Utrecht in the Netherlands found that, on average, essential medicines are available in public sector facilities in developing countries only 40% of the time.

While generic medicines are cheap to make with no royalties to pay, they are still too costly for most people in developing countries.

One example from the WHO list is budesonide, commonly used by asthma sufferers. A single inhaler costs a staggering 50 days wages in Mozambique. In the US, one inhaler costs only US$5 to US$7 (RM20 to RM27) — around 30 minutes work on the median hourly wage.

The reasons behind the expense and scarcity of essential medicines in developing countries are complex, but failures of governance loom large.

Mark-ups along the distribution chain inflate the final price of medicines and include import tariffs, sales taxes, value-added taxes and retailers’ and wholesalers’ margins. In Kenya, mark-ups add 300 per cent to the manufacturer’s price; in Brazil it’s 200 per cent, says IMS, the global healthcare data provider.

Dysfunctional medicine supply chain management is another culprit. A 2015 survey by humanitarian NGO Medecins Sans Frontières reported one in three health facilities in South Africa have shortages of key HIV and tuberculosis drugs. The drugs are imported in sufficient quantities but fail to reach patients due to “local logistical and management problems, ranging from inaccurate forecasting to storage or transport issues”, said MSF.

Governments under-invest in health too. While most European Union countries commit 8 per cent to 11 per cent of GDP to health, few Asian and African countries spend more than 5 per cent: not nearly enough given their enormous health challenges.

These are the major influences on access to medicines. Public health would be best served if the political focus were on these issues, rather than patents.

* Philip Stevens is senior fellow at the Southeast Asia Network for Development (SEANET) and director of Geneva Network, a research organisation focusing on health, intellectual property and trade.