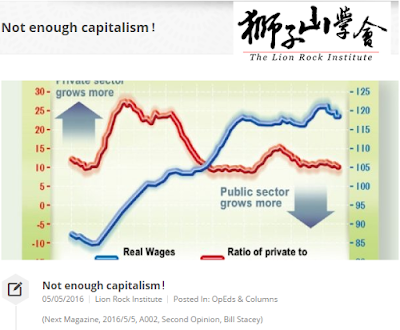 Hong Kong has many contentious public issues, but the underlying source of our discontent is fifteen years of stagnant real wages. For many in Hong Kong we are simply not progressing and the upward mobility from a dynamic economy seems absent. After decades of some of the strongest growth in the world, why has this stagnation happened？

It is all too easy to blame China and the emergence of labor competition, but this would be wrong. Low cost wages were a factor in China well before our stagnation. Wages have been rising rapidly in China recently. China has enhanced our productivity and allowed our higher value added industries to take root. It would be fashionable, but equally wrong, to blame inequality.The real cause of stagnant wages is insufficient capitalism. Capital is the life blood of the economy. When entrepreneurs figure out new products and better ways of delivering goods and services that customers want, they must invest in machinery, equipment, and intellectual property development. Those investments allow workers to be more productive. In the jargon of economists, as the “marginal productivity of labor” increases, the wages that can be paid go up.

Highly productive labor can strike a better bargain with better terms and conditions. Very valuable labor negotiates better pensions and working hours or more money as they wish. It is important to understand that it is not just the skills and education of working people that determine their productivity; it is the interaction between their efforts and the capital that their efforts command. If capital is inadequate, business models archaic, or entrepreneurial innovation insufficient, the talents and education of the population will not be enough to deliver rising incomes.Let us take for granted that our people are at least as talented, skilled, and well educated today as they were 30 years ago. What hampered wage growth is our capitalism that is increasingly tied in regulatory knots as compared to the past. Last year our private capital investment shrank by 8%, whilst public capital investment grew by 7%.As the accompanying chart shows, periods of wage growth were preceded by periods when our private capital investment was much higher than our public capital investment. It can take years for private investments to lead to the advanced businesses that allow wages to rise. Our wealth today is built on the entrepreneurial investment of the past. However, when public capital investment is high compared to private investment, then wages tend to stagnate.

This is the opposite of the story that we are told by officials. They will say that when the private sector is weak, the public sector needs to step in to make up for the slack so as to keep the economy on track. Many will even argue that massive public investment in infrastructure is a vital precondition for the private sector to grow.The trouble is that public investment does not deliver on its promise. It needs to be funded by taxes, so higher public investment leads to higher expected future taxes and less private investment. Public investment is more wasteful as it crowds out cost-effective private sector investment. Public projects are prioritized by political decisions, not markets, so they are often chosen to gain votes rather than profits. More importantly, periods of high public investment are often times when there is enthusiasm for more regulation and government interventions, which are inimical to entrepreneurial investment.Why is private capital investment so weak that it is not supporting the same productivity and wages growth that we generated in the past? Regulation is part of the picture. Long term investments require you to know the rules of the game. Stable rule of law is a precondition for strong private investment. Incentives are vital. If bidding for a government privilege or subsidy is more profitable than investing in better capital, investments will not be made. Too many of our entrepreneurs are on an Ayn Randesque strike, so wages will not rise and our discontent will not pass until we rebuild our capitalist foundations.
------------
See also: Lion Rock 16: 10th Anniversary of LRI, November 07, 2014 Lion Rock 17: Photos and Discussions in Reading Club Salon 2014, November 25, 2014
Lion Rock 18, Nick Smith as new Chairman of LRI, April 05, 2016
Posted by Bienvenido Oplas Jr at 1:17 AM

This blog is impressive and informative.It clearly explains about the concept and its techniques.Thanks for sharing this information.Please update this type of information
SEO training in chennai