Political labels sometimes tend to create more confusion instead of clarifying things on philosophy and ideology. One reason for this is that certain advocates and campaigners of particular philosophies are themselves confused of what they are talking about, and yet they project to be the leaders and articulators of those political philosophies.

There are perhaps a dozen varieties of this philosophy, from the classical to social liberal to American liberal and so on. To help us differentiate and redefine some variants of liberalism and its anti-thesis, the table below will help show different values and definitions.

Classical liberalism was articulated and developed some 2-3 centuries ago, based from the writings of John Locke (“social contract” theory), Adam Smith (“invisible hand of the market”), David Ricardo (theory of comparative advantage), among others.

Neoliberalism was articulated around 1930s and revitalized in the 1980s, with former UK Prime Minister Margaret Thatcher and former US President Ronald Reagan as key personalities of that period. Their movement though was considered as rebirth of Conservatism, not liberalism.

A number of the general advocacies of classical liberalism are carried out by neoliberalism. Anti-liberalism has various shades too, like socialism, communism, and fascism (see table). 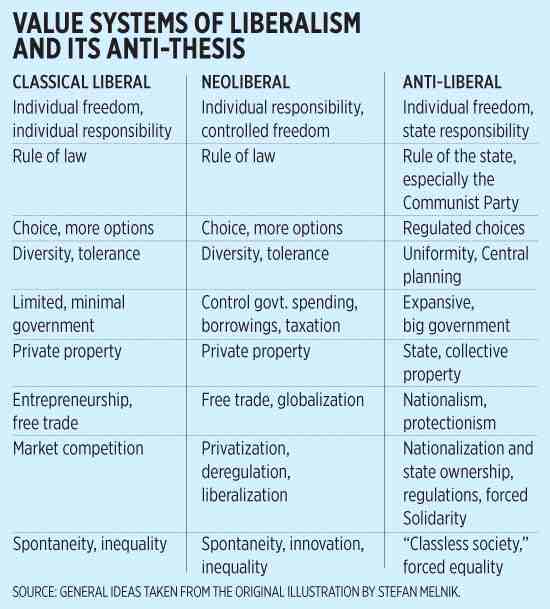 In the Philippines and other parts of Asia, the people are treated to a “taste” of classical and European liberalism through the Friedrich Naumann Foundation for Freedom (FNF), a German political foundation affiliated with the Free Democratic Party (FDP) in Germany.

The foundation conducts national and international political education related to its philosophy of freedom. I have attended some of FNF-Philippines’ public fora and seminars related to free trade, investments liberalization, and human rights protection. I have also attended the International Academy for Leadership (IAF) in Gummersbach, Germany in late 2008, on “Local Government and Civil Society.”

And that shows the ideological superiority of liberalism over other philosophies in the planet, especially over socialism and (classical) conservatism: The primacy given to individual freedom and personal/parental responsibility. The freedom to be hardworking and efficient and the freedom to be lazy and complacent.

FNF Philippines’ Country Director from 2010-2016, Jules Maaten, a former member of the EU Parliament, is leaving his post to become an FNF Regional Director in South Africa. Within those six years, Jules has befriended many Filipino politicians and media people, civil society leaders, think tank officials and academics.

Asked about his most memorable moments and events in the Philippines, Jules said it’s the Filipino people themselves. Warm, friendly, jolly, always singing, etc. He also remembers the Filipinos’ reception to the philosophy of freedom, including the huge participation in the annual “Freedom Run” led by the mascot “Fredo.” And things that he did not like somehow is the lack of real competition in Philippine politics and the economy and the lack of ideology-based political competition which, as it stands, is replaced by personality-based politics.

Meanwhile, the entry of the new administration in the Philippines for six years under incoming President Rodrigo Duterte seem to be more of a continuation of the liberal economic policies of the outgoing administration of President Benigno S. C. Aquino III. In some cases, the new administration promises to be more liberal, more investment-friendly than the current one because of the plan to remove the restrictions on foreign investments and allow 100% foreign equity ownership on more sectors of the economy except land ownership.

Anti-liberal policies on the other hand, like the nationalist and socialist measures in Venezuela has created more underdevelopment, more poverty among its people. Restricting if not killing innovation and price segmentation is a perfect formula to court economic disasters and social misery.

Government function should be focused on enforcing the rule of law and protection of the citizens’ three freedoms -- freedom from aggression, freedom to own private property, and freedom of self-expression.