Congratulations, unofficial President-Elect Rodrigo Duterte. The people have spoken, you got nearly 40% of the national votes based on the SWS exit poll.

Bongbong Marcos is leading by 0.12 million votes as of this writing, no congrats yet. I still hope that my candidate Leni Robredo will beat you in the coming hours or days of official counting. 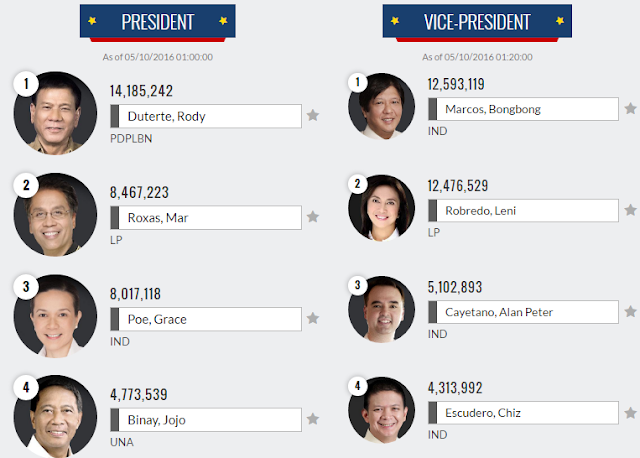 Reflecting on  this general elections, I think there are more good news than bad ones. Consider the following good news:

1. VP Jojo Binay finally loses in an election. He and his family were the alternating Mayors of Makati City (he, his wife, he again, then his son) for almost 30 years, then he won the VP race in 2010.

2. Securing the people's right to life (against murderers, rapists, kidnappers), right  to private property (against thieves, land grabbers) has trumped the politics of welfarism and rabid environmentalism. Duterte's single issue on fighting criminals proved to be more important to many voters than the promises of endless welfarism by the other Presidential candidates.

3. Among Senatorial candidates, populist lefties like Colmenares of Bayaan Mo Na and Walden Bello of Akbayan are losing. These two are rabid advocates of socialism, explicit or implicit. Risa Hontiveros finally made it after losing consecutively in 2010 and 2013 Senatorial elections. She's speaking mostly populist and socialist-leaning but her pronouncements are tempered by her direct association with the LP machinery which is definitely non-leftist.

The bad news, however:

2. Manny Pacquiao will become Senator while Serge Osmena and TG Guingona are losing. Manny is a great man as a boxer and ring fighter. But later he has evolved into sort of a megalomaniac person, jumping into many activities outside of his core competence. Very good in boxing, but lousy as a professional basketball player, lousy singer, lousy Congressman. So he will soon be a lousy Senator? Sen. Serge has a good sense on energy policies, sayang kung matalo sya.

Nonetheless, the important thing is that the elections was held generally peacefully and orderly, it looks credible mainly because of fast turn out of electronic results.

We can move on. Work with the next President with a big mandate and support from the voters. Pero please lang, next President Duterte -- learn to respect the rule of law, let there be due process before penalizing criminals. Some may have stolen just a few chickens but short-cut investigations  and  penalties would say they stole cows and tractors and hence, the penalty is outright execution or "salvaging".

Learn to respect human rights. Kawatan man yan, may existing system of penalties na dyan, like X number of months or years of imprisonment, not outright execution and government-sponsored murders.

Lastly, President-Elect, while you said you were a fan of socialism and BIG government, at one time you also said you want a "minimal government." I hope you will lean more towards the latter and not the former. Thank you.

With 94.3% of national votes counted.
Graphics from gmanetwork.com, thanks. 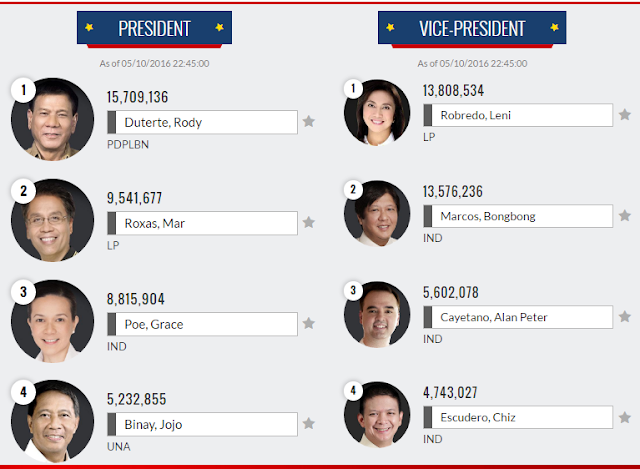 6. Soon we will not see the faces of "no car plate, no sticker available" DOTC Sec. Jun Abaya and MIAA Administrator Honrado, known for his so-called ignorance of "tanim bala" or "laglag bala" extortion racket at the NAIA. Among the "downers" of the PNoy government.

3. Climate alarmism and renewables cronyism in the Senate will have additional voice through Migs Zubiri, strengthening Sen. Loren Legarda. 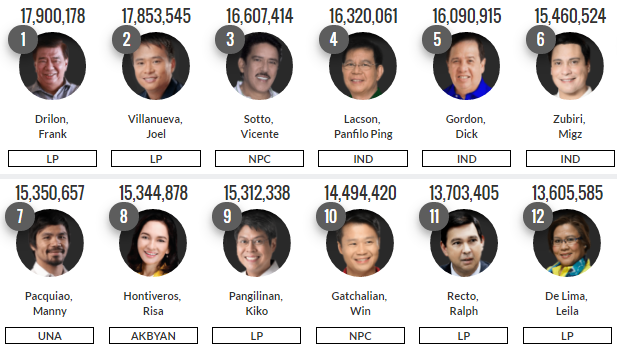 4. Francis Tolentino, currently #13, might edge out Leila de Lima now in #12... Tolentino is generally lousy as MMDA Chair, he used the position mainly for his Senatorial ambition and not to reduce high traffic congestion. Leila stood up against the Iglesia ni Cristo (INC) Edsa occupation dictatorship last year. These INCs closed down a busy part of EDSA for 3N/2D (from Friday night to Sun afternoon). 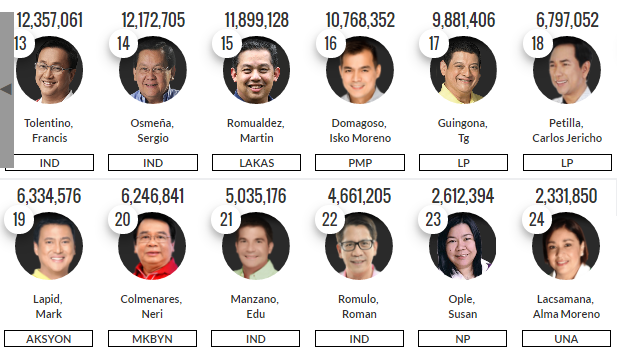 Meanwhile, the PNoy bashers of "massive cheating to make Mar Roxas win  at all cost", learn to have humility and own up to your irresponsible statements. The same goes for COMELEC bashers. I hope to hear your apologies guys. Not to me of course, but to the Comelec and the admin.
---------------