A technical but beautiful paper here from Wattsupwiththat (WUWT). The author is arguing for nuclear power mainly because of its huge energy density compared to all other energy sources, and much much larger compared to solar and wind. Enjoy reading.
———-

AGW or climate change is not the big problem many claim. The perceived scare of AGW has been used by sub-groups in the United Nations to bluff wealthy industrialized nations into transferring money to poor often times corrupt nations. Monies gained from this mechanism have not been invested in the root cause of AGW (if in fact any exists.) At the same time over $1 trillion USD is spent worldwide annually on climate change studies, consultants, related government agencies, and the rapidly growing but totally ineffective green and renewable energy industry. This has also lead to the emergence of the carbon trading brokerage industry. This is based on fraudulent science as CO2 has an extremely small “greenhouse” effect far exceeded by water vapor from the oceans. Only fossil hydrocarbon fuels and nuclear energy can supply material amounts of energy due to their many orders of magnitude higher energy flux densities than so called renewables. Well over half the world’s economically viable recoverable fossil fuels have been consumed while over 3 billion human inhabitants live in “energy poverty:” over 1.5 billion without electricity. Once fossil fuels are depleted beyond the point of economically viable production there is only one energy source available to provide the Earth’s energy needs. That is the conversion of matter into energy as formulated in the equation E=mc2. Man must learn to generate energy based on his knowledge of the laws of physics and the interchangeability of matter into energy. Today we have started with the baby step of nuclear fission. Fission is practical and works today but is unsustainable due to radioactive waste issues. Therefore, we must immediately invest in the experimental understanding of the science leading to the successful demonstration of controlled atomic fusion followed by the R&D needed to commercialize it. Fusion is 100% safe, uses virtually unlimited fuel cycle non-radioactive light element components, and produces no significant radioactive byproducts. In the alternative, man will run out of fossil fuels. AGW is then a 100% moot point because hydrocarbon fuels are not being burned in material quantities. Under these conditions worldwide population will shrink to preindustrial revolution levels of about 10% of today’s population or about 700,000 750 million people worldwide.

Anthropogenic Global Warming (AGW) or climate change is not the BIG problem its advocates make it out to be. Even if it could be proved that man is creating it through his use of hydro-carbon fossil fuels, it is not the truly BIG problem.

Climate change has always been a part of the Earth’s dynamic atmospheric system. During the last 2 billion years the Earth’s climate has alternated between a frigid “Ice House” climate, today’s moderate climate, , and a steaming “Hot House” climate, as in the time of the dinosaurs….

Unfortunately, the potential threat of predicted future climate change has been used to transfer enormous amounts of money from wealthy nations to poor nations [1]. This has enabled the survival instinct mechanisms of the climate change community. That includes governments, consultants, and scientific researchers who simply study the perceived problem and generate academic journal articles and reports. The ineffective green energy solutions manufacturing and service industry also owes their life…and government subsidies…to the climate change scare. No serious money raised by the “climate scare” has been spent on solving the BIG problem.

The BIG problem is the fact that man was provided with about 400 years’ worth of hydrocarbon based fossil fuels which took several hundred million years to be created on Earth. The energy came from the Sun[2]. Integrated over large amounts of geological time, daily Sun energy was converted into chemicals through plant photosynthesis. These chemicals can, in-turn, be ignited to release the stored energy through an oxidation reduction reaction with oxygen [3]. Once they are gone they are gone in human life cycle terms.

What is energy? A physicists will answer by saying “the ability to perform work.” They will elaborate by saying: “energy is a property of objects which can be transferred to other objects or converted into different forms, but cannot be created or destroyed.”

A housewife will say energy is what moves our cars, powers our airplanes, cooks our food, and keeps us warm in the winter – cool in the summer.

You cannot power a world estimated to have 9 billion people by 2060 on energy produced from solar cells and wind turbines.

They are not sustainable meaning they cannot create enough energy quickly enough to reproduce themselves (build more) and provide energy to man. The reason is that the amount of energy received from the Sun is far “too dilute” meaning a very small amount of energy is received per square unit of surface area for relatively short periods of time given the day-night cycle and weather conditions [4].

Wind energy is a secondary effect of solar energy because wind is created by the atmosphere’s absorption of the Sun’s thermal energy in combination with the Coriolis force effect [5]. This is based on the rotation of the Earth coupled with atmospheric pressure differences relating to elevation, mountains, and the like [6].

Hydro power from dammed rives is also a secondary effect of solar energy. The movement of water in the Earth’s vast system of rivers occurs because of solar energy. This happens as seawater is evaporated, forms clouds, and ultimately water is released as rain and snow keeping our rivers full and flowing out to sea from higher elevations propelled by gravity. Unlike solar and wind, hydropower can consistently produce material but limited amounts of energy….

Energy density is the amount of energy stored in a given system or region of space per unit volume. Specific energy is the amount of energy stored per unit mass (weight.) Only the useful or extractable energy is measured. It is useful to compare the energy densities of various energy sources. At the top of the list is fusion followed by nuclear fission and then hydrocarbon fuels derived from petroleum, coal and natural gas. At the bottom of the list are batteries which either generate energy or store energy as well as “renewable energy” such as solar…. 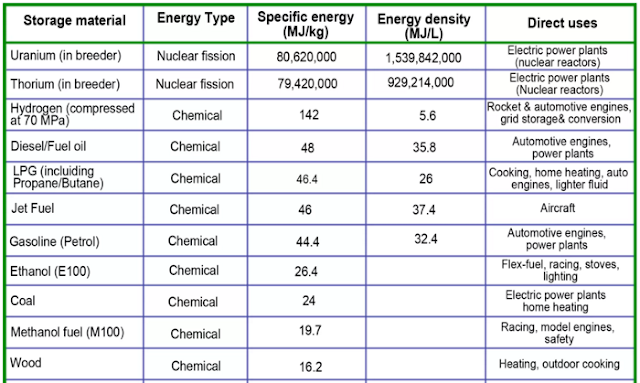 1 How much solar power per cubic meter is there? The volume of the space between a one-meter-square patch on Earth and the center of our orbit around the sun is 50 billion cubic meters (the earth is 150 billion meters from the sun, or 4,000 earth circumferences). Dividing the usable 100 watts per square meter by this volume, yields two-billionths of a watt per cubic meter. Sunlight takes about eight minutes(499 seconds) to reach the earth. Multiplying 499 seconds by twenty-six billionths of a W/m3 reveals that solar radiation has an energy density of 1.5 microjoules per cubic meter (1.5 x 10-6 J/m3).

2 The only way to extract thermal energy from the atmosphere is to construct an insulated pipe between it and a reservoir at lower temperature (preferably a much lower one). This is how geothermal heat pumps work. Typical ground temperature is 52F (284 K). On a 90F day, such a system has a peak efficiency of 7%, and a power density of only 0.05 mW/m3 (Stopa and Wojnarowski 2006): typical surface power fluxes for geothermal wells are on the order of 50 mW/m2 and have typical depths of 1 km. To find the energy density, a characteristic time must be included. The time used should be that of the time required for water being pumped into the ground to circulate through the system once. This number is on the order of ten days (Sanjuan et al. 2006). The resulting energy density is 0.05 J/m3, or roughly two to three orders of magnitude lower than wind or waves.

3 Wind is driven by changes in weather patterns, which in turn are driven by thermal gradients. Tides are driven by fluctuations in gravity caused by lunar revolutions. The energy densities of wind and water systems are proportional to the mass, m, moving through them, and the square of the speed, v, of this mass, or ½mv2. At sea level, air with a density of about one kilogram per cubic meter moving at five meters per second (ten miles per hour) has a kinetic energy of 12.5 joules per cubic meter. Applying Betz’s Law, which limits efficiency to 59% (Betz 1926), yields about seven joules per cubic meter. Thus, wind energy on a moderately windy day is over a million times more energy-dense than solar energy....
--------------