The SWS, Pulse Asia, and The Standard Poll, these 3 big survey firms say that based on their latest (until this week) surveys show that Duterte will win on Monday, May 9 general elections, getting about 1/3 of the votes. The other 2/3 votes are split into 4 other candidates. So a Du30 victory has a high probability. What's next?

A 2-party system where the winner should get at least 50% + 1 of the votes will have a better mandate. And there are lots of knock out polls before one can be the standard bearer of 2 strong parties. But that will require change in the Constitution.

Du30 and camp always say, "joke lang yon". Like his plan to kill 100,000 criminals, his comment that he should have been the firs to rape that Australian hostage victim, etc, joke lang yon. So very likely, his plan to rid the country of crime and corruption, joke din lang yon.

But deep inside, he is serious in his plan to impose a dictatorship. His plan to declare a revolutionary government, abolish Congress, was reported in big news outfits here. The words came from Du30 mouth, not from me or those news outfits. But then again, many things that he said and promised can be "joke only"? 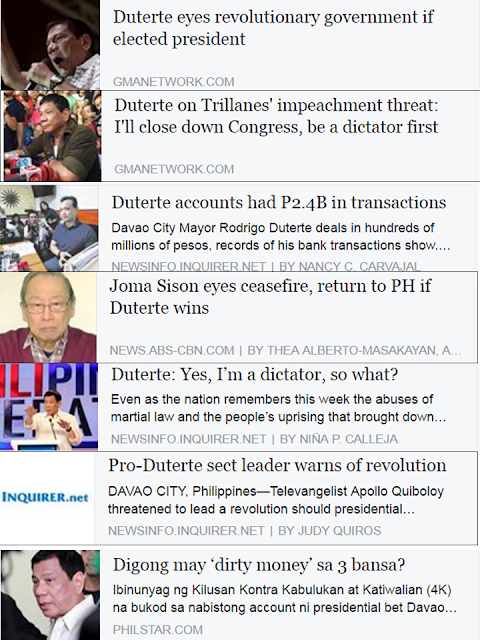 Only 2 days left to a likely Du30 victory. Not a fan of Du30, we can only plan or anticipate what's next, how to move on.

If Du30's love affair with the CPP-NPA and Joma Sison + his declared affinity with socialism continues, a coup by some sectors of the AFP is one possibility. A strong impeachment case in Congress over hidden wealth, state-sponsored murders of suspected criminals, is another. If Du30 fights back and declares a revolutionary government, abolish the Constitution, abolish Congress and rule by decree, a bigger instability will happen.

A Du30 victory is bad news. His love affair with socialism and CPP-NPA is bad news. But compensated by a Binay defeat, good news. Plus a reminder to the liberal government and many welfarists in the country -- that protecting the people's freedom from aggression and murderers -- are more important to many people than more welfarism and CCTs, more taxes to sustain more welfarism, more environmentalism and climate alarmism.

He will need military in his plan to create a revolutionary government and abolish Congress. But many sections of the military will be silently against him because of his explicit love affair with CPP-NPA, so he cannot abolish Congress. So he will go through the impeachment process in Congress and things will go more wild as more dirt will be uncovered.

A better preparation to avoid a Du30 victory would have been a Mar-Grace coalition. Mar being 3rd to give way to Grace being 2nd, and Chiz will give way to Leni Robredo, now tied with Bongbong Marcos for VP. If Grace wins, well and good. If Du30 still wins, then there is Leni who will take over if Du30 is impeached, still a good outcome.

But then again, Mar Roxas and the admin have invested too much for Mar, backing out is no longer an option for them.

We should ensure a strong and more independent Congress, House and Senate. An indep legislature can hasten a possible Du30 impeachment, maybe 1 year or less, Du30 will be gone. Leni can take over.

I disagree with the statement by many anti-administration people, that under PNoy, "the poor is getting poorer." Pang tv drama statement lang yon. They mean that those who used to ride bicycles before shifted to walking under the PNoy govt, not driving motorcycles or 2nd/3rd-hand cars?

Credit where it is due. This Admin has created more positive econ results than the previous ones. While the US, Canada, EU, Japan, etc are happy to grow 1-2% the last few years, the PH was growing at 5-6%.

Less or minimal government advocacy is far out from the current electoral debate. It should be a realization for some that BIG government means big expectations, big disappointment. And I think that is one mistake of the LP administration, they have expanded the PH government much faster than in previous admins. Budgetary growth of P0.3 trillion a year even without a crisis, and almost P0.5 trillion rise from 2015-2016 budget, this year, for me that's lousy.

Any significant increase in the revenues should have been used to retire many old public debt, the debt service payment should go down significantly, eating away around P0.35 trillion a year interest payment alone. The promises of the admin to expand CCT, meaning more welfarism and endless, no time table subsidies, for me is anti-liberal.