* This is my article in BusinessWorld last Thursday.

Thus, it is unwise for governments to institute measures that will make electricity even more expensive and make the construction of power plants become more costly and bureaucratic. Depriving the people of more access to cheaper electricity and stable energy sources is violation of their human rights, the right to live in safe communities, and road travel at night, the right to productive work and studies, the right to entertainment with families and friends, anytime they like.

Consider the following data on energy poverty in the ASEAN from the International Energy Agency (IEA) and the Economic Research Institute for ASEAN and East Asia (ERIA). We exclude Brunei and Singapore in this list because they have 100% provision of energy for their people (see table). 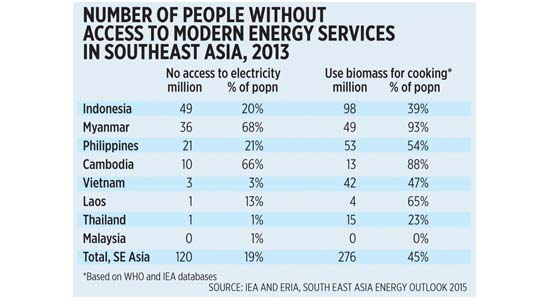 Is this a good situation for the country and our people? Maybe if one advocates de-industrialization and low standard of living as much as possible, the answer is yes.

“The Philippines intends to undertake GHG (CO2e) emissions reduction of about 70% by 2030 relative to its BAU scenario of 2000-2030. Reduction of CO2e emissions will come from energy, transport, waste, forestry and industry sectors.”

This means that we should cut our carbon dioxide (CO2) emissions by 70% compared to a business as usual (BAU) scenario.

How will several industries be adversely affected? Mainly through more expensive electricity as more expensive, subsidy-dependent renewables like wind and solar will be forced-fed into the grid and distribution utilities. Even if cheaper electricity from coal and natural gas plants are available, they will be second priority when power from intermittent but expensive sources are available. So our monthly electricity bills will keep rising.

Also, more electric tricycles and jeeps will be fielded via tax-funded programs, like the ADB loan of $300 million (around P17.2 billion) for 100,000 new e-trikes in the country. Purchase of e-trikes is borne by taxpayers, their daily electricity charging is also borne by taxpayers via charging stations in municipal/city halls.

And firms will be forced to procure more capital-intensive processes, meaning higher operational costs to be passed on to consumers in the form of higher prices of goods and services.

The Philippine Chamber of Commerce and Industry (PCCI) early this month wrote to the CCC questioning that commitment of a high target, 70% GHG emissions by 2030 as this will put undue pressure on local industries and strain the growth of the economy. The PCCI said, it supports GHG emission reduction but that “high target” is impractical. Their proposal was 40% reduction.

Good call by the PCCI. Expensive energy, costly prices of commodities and services, should be among the last things that we should aspire for our people.

Those alarmist scenario of “more severe weather”, “unprecedented, unequivocal global warming” and catastrophic “man-made” climate change remain questionable. Climate changes from warming to cooling to warming to cooling, in natural and endless cycles, since the planet was created some 4.6 billion years ago. Consider this data for instance (see chart). 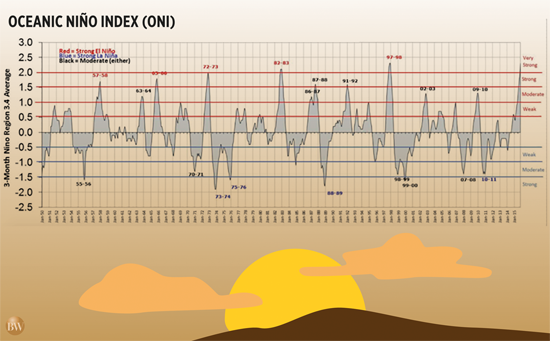 Continued demonization of CO2 -- a useful gas that we humans and our animals exhale, the gas that our plants, trees, and crops use to produce their own food via photosynthesis -- is creating more distortions in energy and economic policies.

We should not aspire to rival Myanmar and Cambodia, much less North Korea, in energy poverty. Government -- through the CCC and DENR especially -- should get out of overly ambitious alarmism in energy rationing.

This subject was not highlighted in the recent Presidential elections but President-elect Rodrigo Duterte was quoted in one forum during the campaign period that he supports more coal power plants to sustain the country’s rising energy needs. Let us hope that he will stick to this policy.

Bienvenido S. Oplas, Jr. is the head of Minimal Government Thinkers, a Fellow of SEANET and Stratbase-ADRi. minimalgovernment@gmail.com
--------------

Unknown said...
This comment has been removed by a blog administrator.
7:29 PM