Energy 66, What companies receive FIT and by how much? 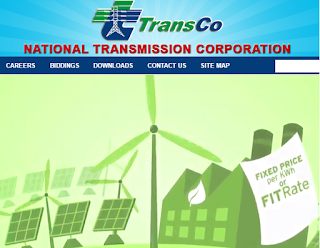 This is the subject of my letter to the National Transmission Corporation (TransCo) last Monday. TransCo is a government corporation that owns all the transmission assets of the government. Among its five key responsibilities is to administer the Feed-in-Tariff Allowance (FIT-All) Fund for renewable energy (RE) generators. Its website clearly and proudly discusses the FIT system and why it is "good" for electricity consumers because of its "merit order effect".

I wrote to their customerservice@transco.ph early morning of May 16, 2016:

I would like to request for data on (a) list of RE companies that have received FIT, 2015-2016, (b) how much each company received, (c) total FIT payment, (d) related data that you may want to share.

I will use the data for a research paper that I am writing for our think tank, Minimal Government Thinkers, which I hope to send you and the DOE a copy, and a short version for my column in BusinessWorld. I assume these are public data as the money collected is taken from electricity consumers nationwide.

Thank you very much and I hope to  hear from you.

I did not get any reply. I followed it up with another email  yesterday morning,

I would like to ask if you can share this data with me.
Thank you very much.

Still no reply. Ahh, this must be among their "top secret" data perhaps? One problem with the absence of a Freedom of Information (FOI) law or Exec. Order is that certain government offices can only collect-charge-bill-fine us ordinary people and when we ask where the money went to, they can only give one standard reply, the Sound of silence. 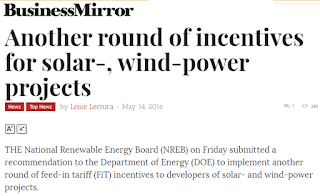 Anyway, I saw this report in Business Mirror the other day, among the numbers reported there:

"FiT subscriptions for RE resources have significantly increased to 806.82 megawatts (mW) from 646.65 mW installations since the start of 2016. The following are the FiT subscriptions to date: Biomass has 11 power plants with a total capacity of 94.25 mW; hydro has four accounting for 26.6 mW; wind has six accounting for 393.9 mW.

Meanwhile, as of March 15, 2016, the DOE issued Certificates of Endorsement for FiT Eligibility (COE-FiT) to 11 solar-power plants accounting for 292.07 mW to the Energy Regulatory Commission (ERC). More solar-power projects may be issued COE-FiT at the completion of the ongoing validation and assessment of the submissions received by the DOE in relation to the March 15 deadline for the expanded FiT for solar-power projects."

So, as of March 15, 2016, DOE issued COE-FiT for the following installations:

Expensive electricity is lousy. Making it even more expensive with extra charges like FIT-All is lousier. And when we ask who are these companies that receive the extra charges, the answer is a Sound of silence.

Hi TransCo, I still hope to receive a reply from you. I hope to write another paper about you soon, whether you give a reply (and some data) or not. You will receive this blog post via email, fb, twitter, etc. Three of your Board Members are Cabinet Secretaries -- DOF, DOE, DENR. They all have twitter accounts. Thank you.

Today, I received a reply from Transco, they sent me two tables, the FIT-All cash flow and fund payables as of end-December 2015. They also gave me the name of the person I should talk to, the office local tel. no. 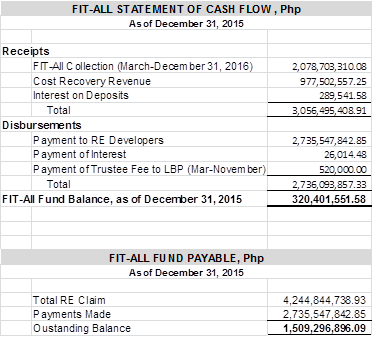