During the 3rd and final Presidential debate last April 24, 2016, all five candidates said they are opposed to contractualization of labor -- getting contracts for work of 5 months or less, not reaching 6 months after which the worker should get permanent position in the company, entitled to various labor benefits and allowances.

Ending contractualization is a populist and "politically correct" position but it is actually an anti-labor policy. The best labor policy is to allow, encourage workers to become start up entrepreneurs and small capitalists themselves. Tying the hands of entrepreneurs in hiring workers will result in less workers being hired. Get only 1 worker, multi-skilled, talented, ambitious, to do the job of 2-4 people, and give that worker high salaries, benefits.

If there is automatic security of tenure for workers upon hiring, why would they aspire to become efficient if they cannot be fired? If mandatory security of tenure is assured for workers, then entrepreneurs will hire as few workers as possible, only the highly talented, ambitious, multi-skilled will be hired; give them more high power computers and machines. And millions of less-skilled, less talented ones will not be hired.

If people cannot be hired by others, then they should hire themselves through self-employment and entrepreneurship, as outsource service provider to more financially stable companies and individuals.

Which implies that certain government regulations that bureaucratize entrepreneurship should be drastically reduced if not abolished. Job creation -- to others or to oneself -- is not a crime. Hence, it should not be over-bureaucratized and over-taxed by the government. Government should step back instead.

The policy of "expensive to hire, difficult to fire" looks like wonderful protection of workers. But those who have no jobs and those who work in the informal sector are not covered by these rigid labor laws. A common result of this situation is high unemployment and underemployment rates.

People need not aspire to become employee forever, unless they are employed in big, stable and regionally/globally competitive firms. These firms hire only the best, the most adaptable, the multi-skilled people. They can give 5x, 10x, 20x the minimum wage for these people, and they hire as few as possible. Efficient workers + machines and computers are all they need to stay big and competitive. The less-skilled people, they won't be hired. Maybe in government, the biggest employer in any country in the planet.

Who can be that "Santa Claus" who can give seed capital to the poor, government? 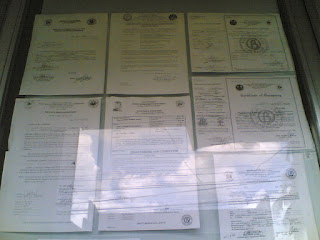