Election 23, Leni for VP, the Senatoriables

Only 2 main contenders for VP tomorrow. Leni Robredo ha.
For the Senators, sure winners but I will still vote for them: Pangilinan, Osmena, Drilon. These 7 candidates will fight for slots 9-12. Will vote for Gordon, de Lima, and Guingona. 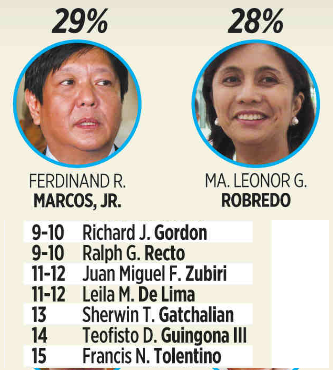 Aside from sure defeat of Binay, the other consolation of this election is that lefties like Colmenares and Bello are losing. Last night, I passed by this street in Makati around 8pm. When I came back at midnight, this lefty's supporters showed their dictatorial instinct by making this white-painted wall become ugly. 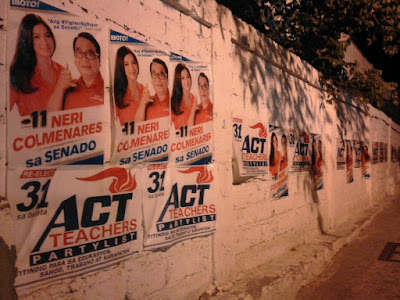 more Filipinos are mature enough and not voting socialist- or commie-leaning politicians.

Another consideration when in doubt: Congress, the Senate especially should be independent as much as possible from the Executive branch. So in a likely event of a Du30 Presidency, the Senate should be LP majority. Also for the lower House, although many Congressmen tend to jump ship to the President's party. 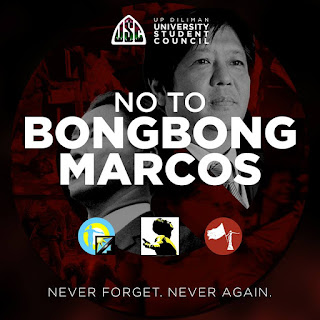 "Kapit for Leni!
To all my friends who are still supporting Alan or Chiz, now's the time to make your decision - switch your vote to Leni because your vote for Alan or Chiz will only be helping the dictator's son!
P.S. Please disregard if you're going to switch to BBM. Don't switch na lang. :-)"

From Sureb Berus, another good advice.

So what is a free marketer doing in this election where no one among the major candidates is clearly free marketer or advocating minimal government? Simple. To help in defeating candidates and political parties that are outrightly for more populism and welfarism, socialism and murderous fascism, family plunder and rule of men.

In this case, Bongbong Marcos represents the party of family plunder, with billions of dollars of unreturned hidden wealth of his family to the PH treasury. After VP, he will then be eyeing the Presidency, and  it will be easier for him to capture it than if he is defeated and returns as a Senator.

For the Senatoriables, help candidates who may be welfarist (all of them, anyway) but have strong position on enforcing the rule of law.
---------------