More than three years ago, I wrote these two articles: 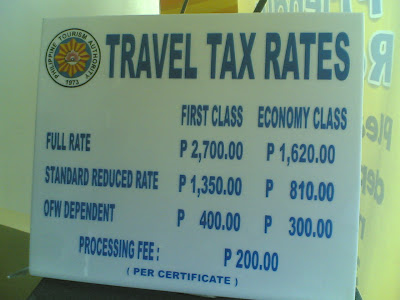 Where does the tax collection go, the Philippine Tourism Authority (PTA) and the Department of Tourism (DOT)? For what, considering that these agencies get annual subsidies from our taxes as authorized by Congress? Besides, PTA does not give "free lodging" or any service for its hotels to average taxpayers. It does provide free lodging though to certain government officials and personnel, and those friends of the PTA and DOT top officials.

A friend said that this tax was invented sometime in the 70s when the government (under Mr. Marcos) thought that foreign travel was a luxury and foreign exchange drainer; hence, Filipinos traveling abroad should be penalized by such tax. These days, international mobility of people is a necessity, both at the macro and micro levels. Retention of said travel tax is thus, plain extortion. Try asking citizens of other countries, especially of developed countries, if their governments are charging them a “travel tax”, most likely the answer is No.


Another friend who owns a travel agency told me that once the airline and travel agency sectors lobbied in Congress to remove that tax. The Congressmen according to my friend, just nodded their heads and did nothing after that.

Perhaps it is time to call again for the abolition of that tax.

One indicator of how free a country or society is, is the ease of mobility of its citizens to travel both within the country and abroad. The easier and less costly it is to move around, the more freedom the people have. On the contrary, the more bureaucratic and more costly it is to travel, the less free the people are. In short, mobility = freedom. Less mobility, less freedom.

To travel abroad, a Filipino needs (a) a Philippine passport, (b) a plane ticket, and (c) a valid visa of the destination country whenever it is needed. For many Asian economies like Hong Kong and member-states of the Association of Southeast Asian Nations (ASEAN), visas are not needed for visits of less than 30 days.

For Filipinos traveling abroad to attend a conference, to study, a business trip, or as tourists, they have to pay (a) travel tax of Php1,620 per passenger, and (b) airport terminal fee of Php750. Hence, even before one can board a plane, he has to shell out nearly Php2,400 already and it is not a small amount. Overseas Filipino workers (OFWs) are exempted from paying travel tax and also the terminal fee, I think.

Other costs are (a) passport pictures, Php150 for six copies, definitely a monopolistic price, service provided by the Department of Foreign Affairs (DFA) multi-purpose cooperative; (b) securing birth and/or marriage certificates, other papers and clearance from other government agencies when necessary, and (c) taking a leave from office, first to get a schedule for application processing, and second, actual processing day, payment, data encoding, etc. Some people apply through their travel agents, and normal processing fee by the travel agencies is Php1,000 per passport, but the applicant still has to go to the DFA for the electronic signature and perhaps interview for first-time passport applicants.

Those long queues are stressful and costly for passport applicants. Long queues mean only one thing: the supplier of the service or a commodity is small or few relative to those who demand the service. In order to reduce, if not remove the long queue, the supplier should either expand the staffers who attend to the long lines of people, or expand the number of offices (or shops) in different places to attend to more people from more places.

Fastfood chains do that. Banks too, and malls and convenience stores, gasoline stations, repair shops, Internet shops, barber shops, and so on. All private enterprises operating in a competitive environment are stretching wide and hard to reach out to more people, to serve and satisfy more customers.

Why can’t the DFA and many government agencies follow that? If the current number of personnel is not enough, then DFA should rechannel some of its staff from other departments or divisions to help in the passport processing work; or hire more staff. If eight hours on 5 ½ days are not enough, then work 12 hours on six days per week. If the DFA building is not enough, then get or rent additional offices in other cities, both in Metro Manila and the provinces. Many DFA regional offices across the country are also experiencing long queues for passport applicants. There are additional costs for this expansion of offices and staff, definitely, but there are additional revenues too that can more than finance the additional expenses.

I suggested the re-channeling of some staff from other DFA offices and divisions because I have noticed that while the staff at the Passport Director’s Office and related offices working on passport issuance are harassed and seem to be overworked, the staff from neighboring rooms and offices at the DFA seem idle.

If the DFA cannot have the flexibility or will to expand its staff and/or offices, then it may consider allowing and accrediting some private travel agencies to process passport applications. Then the DFA main office can attend more to those applicants with special or urgent need for a passport.

Like my case. Last month, I was going to Atlanta, Georgia to attend the Atlas Liberty Forum. The sponsor paid for my hotel and subsidized my plane fare. Less than a week before my flight, my passport accidentally got wet; my travel agent advised me that I need to get a new one as my current passport might be declared “mutilated” and hence, invalid, by the immigration officers of the Philippines and the US.

With the help of some friends who have friends at the DFA, I was entertained at the Passport Director’s Office, where there is a long queue of people who may have the same urgent need for a new passport. Anyway, I had to cancel my original flight, got my new MRP after four working days, flew the following day, and caught up the conference on the day it started.

The high cost of getting a new passport plus travel tax and terminal fee constitute an indirect restriction to some people who maybe poor and desire to be more mobile across the country. The world is globalizing fast, and there are not too many opportunities in the country given the bad state of governance. Those unnecessary but indirect restrictions to people’s mobility should be reduced. The travel tax, for instance, looks like extortion since there are no corresponding services to the public who paid the tax. It should be abolished.

marvin said...
I agree a to stop the tax collection from the poor...
http://www.visa-sponsor.blogspot.com/

Ally said...
Hi! I'm from Malaysia and I've just hired a domestic helper from Philippines. I read that the travel tax and airport tax amounts to PHP2400. But I was asked to pay PHP10,000. Is the tax different for working visa holders? I appreciate your reply. Thank you very much!

I take this opportunity to ask if I can set an appointment with you to discuss a business proposal. You can contact me throught my mobile number 09216372272 or through my email add pelits15@yahoo.com.
Let me know your available date and time to discuss business.

So sorry to see these comments only now. I didn't check the comments in this blog.

Ally, the P10,000 could be for a working visa. The P2,400 I mentioned was for (a) travel tax P1,620 for Filipinos travelling abroad, except OFWs, government officials/personnel, etc., and (b) airport terminal fee P750.

Pelita, what business proposal? You can open the main proposal via email, noysky_oplasky@yahoo.com. Thanks.

JohnBenjamin said...
Thanks for providing a great resource.This site is extremely informative and i will definitley refer it to my site visitors.

may villafranca said...
hi sir, i will travel malaysia next week with my 2 children,5 and 2 years old, how much i will pay on travel tax and terminal fee for my two children,is there any discount for minor below 12 years old? thnks
--------

Today, I will just focus on the travel tax.

A few weeks ago, a friend posted in facebook, "What is a travel tax for?" and I quickly commented, "It's nothing but another legalized robbery. There is zero service to the passengers." 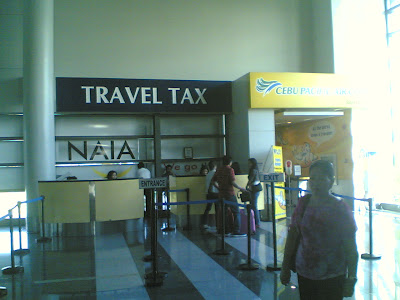 I read that there is a law enacted sometime in the mid-80s creating the travel tax. I can't remember what it is for, but as an international traveler at least 3x a year (mainly to attend conferences, and all expenses (plane fare, hotel, airport transport) paid for by the inviting organizations, I can say that there is ZERO service to Filipino passengers who pay that tax.

The "standard reduced rate" of one-half the regular travel tax applies to passengers who are below 12 years old, I think. But still, they have to pay P200 "processing fee" to avail of that "reduced rate" or "OFW dependent", so government still gives very little discount actually.

Of course there are other taxes and fees slapped on the airlines (landing fee, baggage handling fee, etc.)

Other countries and economies who attract at least 10 million foreign tourists a year, I think they don't slap their nationals and their visitors with lots of taxes. Those tourists are coming in to spend in the local economies -- hotels, restaurants, local land transportation, tourist spots, souvenir shops, tour guides, boat rides, etc.

The travel tax is a racket that feeds certain bureaucracies in the government, but they do not give any service to the passengers. They add to citizen dissatisfaction who think that government and taxes exist mainly for the state and its bureaucracy, not for the public. Not all Filipinos who travel abroad are for pleasure and shopping. Many travel for training, seminars and conferences, or to explore work and studies abroad, or simply to visit folks and relatives abroad.

I will be very happy -- along with millions of other Filipinos -- if the travel tax will be abolished someday.
----------

Thanks for posting this info. I can barely find anything that sheds light on this legalized form of corruption that has been going on for decades now. My father told me this tax was imposed just right after martial law to discourage mass exodus. Is this corraect?

It seems to me this has been around for so long that today's generation of leaders have forgotten why we have this tax.