Climate Stupidity 25: Wetter or Drier, We Send them More Money

I brought my family once again to my birthplace -- Lag-asan, Cadiz City, Negros Occidental -- last December 26-28, this week. When we took the boat last December 26, Supercat, the biggest of the 3 fast craft companies that ply the Iloilo-Bacolod route, would be tossed partially by the rough sea. Many passengers including my wife, vomited. That day, Iloilo and Negros were dark with thick rain clouds above.

Rains started falling around 3pm, got stronger by 6pm and did not stop until the next day around 8 am, or at least 14 hours of non stop rains. 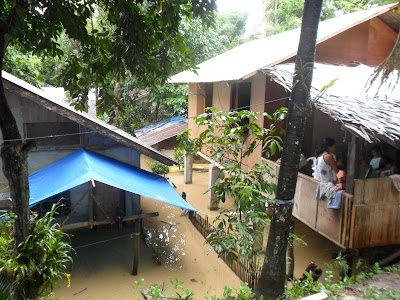 This is the sight the next day, December 27, in a low lying area just about a hundred meters from the house of my parents. My daughter's nanny in Manila who was also on a vacation with us, lives in one of these houses. They said that they experience this kind of flooding from time to time, about 5x last year, and about once this year.

The river swelled from a big volume of rainwater from the mountains, plus the fact that the river's width is shrinking due to thick vegetation of nipa. My elder daughter did not like watching a flood, she did not want to get out of my back. My younger daughter is being carried by her nanny here. 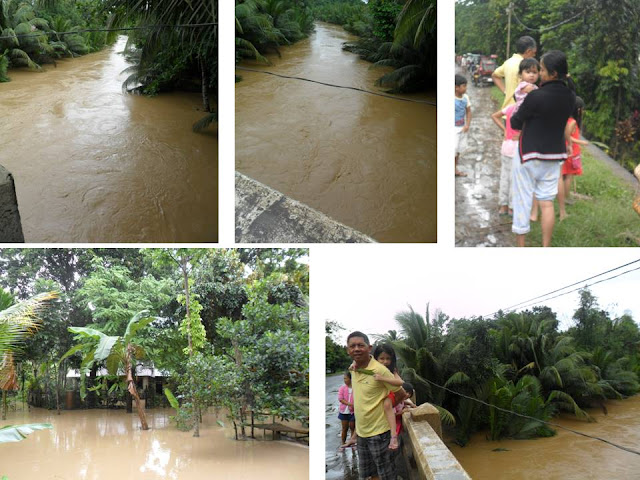 And one more bad news: we have a full day power outage that day. It was cold, fine, no need for an electric fan. But it was also dark as the thick clouds were still around even if the rains have stopped. Power resumed around 6pm. We watched the news on tv. Turned out that the whole Visayas, from regions 6 to 9, were affected by the heavy rains with many cities flooded. And it extended further south to Mindanao.

Yesterday, I saw this weird news headline with some idiotic pronouncements from Philippine government climate and weather officials:

WORST YET TO COME


Grimmer weather seen in next 10 years


11share355334
The country hasn’t seen the last of extreme weather events.
Climate projections for 2020 and 2050 by the weather bureau are even grimmer: The dry season would be drier and the wet season would be wetter, and the damage to crops and water sources would be far-reaching.
Mary Ann Lucille Sering, vice chairperson of the Climate Change Commission headed by President Benigno Aquino III, said that worst-case projections were for 2020.
“But the weather is changing now,” Sering said in an interview in the aftermath of the destruction wrought by Tropical Storm “Sendong” in Northern Mindanao.
“If we say we are racing against time, then technically, we can say that,” she added.
In fact, the country is in the midst of an environmental turmoil and politicians should address this with urgency, said Rosa Perez, a climate scientist at the Manila Observatory.
“They think it is a future problem, but it is happening now,” said Perez, lead author of a UN report on climate change adaptation and sustainability...
During the 2020-2050  period, there would be less rainfall during summer, “making the usually dry season drier,” the Philippine Atmospheric Geophysical and Astronomical Services Administration (Pagasa) said in its 2011 report, “Climate Change in the Philippines.”
Rainfall, however, is likely to increase during the rainy season from June to August, and then from September to November, “making these seasons wetter,” according to the report released this month....
------

See that? "The dry will become drier and the wet will become wetter." Whether the climate and weather will be wetter or drier, warmer or cooler, less rain or more rain, less typhoon or more typhoon, it's all due to "man-made climate change", so we should send them more money so they can fight climate change.

I have asked, I am asking again, these guys of these questions:

1. No such thing as global cooling, only global warming?
2. No such thing as natural climate cycle of warming-cooling-warming-cooling, only man-made climate change?
3, We are not in a period of global cooling, only climate change, or climate disruptions, or climate catastrophe, or other climate-what-have-you?
4. Natural factors like volcanoes, water vapor, clouds, the Sun, galactic cosmic rays, do not affect planet Earth's climate as much as human CO2 emission?
5. Today's climate is "worse" and has changed since when? 30 years ago? 60, 100, or 1,000 years ago?

Readers, what do you think these guys will answer?

Related to question #5 above, this piece from Steven Goddard is cool:

The press has been pushing the idea that the recent Philippines flood was due to global warming.

That is impressive, but 100 years ago the Philippines received five times as much rain (88 inches) from one storm. CO2 was 310 ppm at the time.
Once again we see that global warming alarmism is rooted in  nothing more than superstition and ignorance.

http://trove.nla.gov.au/
And  related article from the same blog:


A Religion Of Mindless Dishonest Superstition

Philippines floods: an expected shock
Even when we do know about climate-related hazards, we still fail to act
The typhoon that hit Mindanao in the Philippines before Christmas to claim 1,000 lives and leave nearly 50,000 homeless was a shock,
And as the planet warms, so too does the potential for meteorological disaster. Not all disasters relate to the climate, but rising levels of greenhouse gases could double the probability of catastrophic rainfall and other weather extremes. In 2011 the United States has already experienced one of the worst years on record, with a 1,000 dead in a dozen disasters, each exacting a financial toll of $1bn or more. The total cost of these 12 assaults by tornado, wildfire, drought, blizzard, flood and heatwave is put at $52bn. The number of events that meet the UN definition of a natural disaster has risen steadily with each decade, and catastrophic floods, windstorms and so on have become everyday events: in 2010, there were 385, and they killed 297,000 worldwide. The tally for 2011 is not complete, but the auguries are ominous.
http://www.guardian.co.uk/

This is complete, unmitigated bullshit from the Guardian. In 1927 there were almost ten times as many US disasters as there was in 2011. There is zero evidence that the weather is getting worse. The Guardian is promoting the big lie.

And this news from History.com, where nearly 70 inches of rain fell in one month in 1972:

Floodwaters finally recede in Luzon, Philippines, on this day in 1972, revealing devastation and hundreds dead. An astounding rainfall in July had caused rivers all over the large island to flood.
One storm after another battered Luzon in July 1972. Manila received nearly 70 inches of rain during the month. On July 13, a monsoon caused several dikes to fail and 32 people lost their lives in the resulting flood. Less than a week later, a typhoon dropped even more rain on the already saturated region. Dikes throughout the area broke down, flooding large swaths of land. Millions were left homeless and 142 people died. Nearly all major and minor roads were under water or mud.
The flooding continued until the rivers finally peaked on August 4. In addition to the thousands of people forced from their homes, the rice crop for the season was lost. Food riots broke out in several places and looting was rampant. Cholera and typhoid epidemics also resulted.
Further related to question #5: Do the warming leaders recognize or reject the existence of the medieval warm period (MWP) and the little ice age (LIA), several centuries before the present?

From the many literatures of the UN, governments, WWF, etc., there is either very little or zero mention of these two periods, lasting for a few centuries. Dr. Tim Ball made this observation:

by DR. TIM BALL on MAY 10, 2011
in ATMOSPHERE,DATA,GOVERNMENT,HISTORY,POLITICS,THEORY
... The MWP was problematic as the most recent and clearly pre-industrial. Figure 1 shows temperatures for Europe for the last 1000 years shown in the 1995 Intergovernmental Panel on Climate Change (IPCC) Second Assessment Report.

Figure 1: Temperatures for Europe plotted against 20th century average
Source: Based on diagram in 2nd assessment report IPCC 1995/96
It shows general warming from 1680 following the cold of the Little Ice Age (LIA) that was coincident with the Maunder Minimum of sunspots. This warming shows why charges that others and I were global warming deniers were false. What we questioned was the claim that humans were the cause. “Dickens Winters” relate to Charles Dickens and the cold weather, poor harvests, and hard economic times typified by A Christmas Carol. The period correlates with the Dalton Minimum of reduced sunspots. Conditions of that time are similar to those anticipated for the next 30–40 years.
Dominance of the graph by the MWP was the challenge. As IPCC participant Jay Overpeck said in his email to Professor Deming, “We have to get rid of the Medieval Warm Period.” This was achieved by the Mann, Bradley, and Hughes 1998 paper in Nature titled, Global–scale temperature patterns and climate forcing over the past six centuries, the original peer-reviewed hockey stick article. Reviewers failed to catch several errors, including the assumption that tree rings only represent temperature, a plethora of evidence for existence of the Medieval Warm Period, and inappropriate statistical method and application. Problems with the hockey stick were identified, but not before it grabbed world attention. A modified (but no more valid) version appeared in the 2007 IPCC Report. It had the same problems as the original with a few more added, including the error of assuming growth rate of stalactites and sediment layers were due to temperature, not precipitation....
I say, Amen.
--------

Also note that there are many very imaginative climate scientists (not all)who are reinterpretating (in other words, putting a spin) the Laws of Thermodynamics to support their man-made global warming (AGW) hypothesis (in other words, empirically testable conjecture - emphasis on conjecture). The hypothesis (not a theory) of AGW contradicts the most basic principles of physics. This is a proven fact. Therefore, the hypothesis of AGW has been tested and proven false.