When I experienced frequent LBMs after a possible food poisoning three days ago, I went to Iloilo Mission Hospital’s ER if they accept Maxicare card, they said Yes. I went through different procedures: body temperature, blood pressure, pulse rate, then they also requested blood test for nitrogen and potassium (N,K) and fecalysis. Here’s the cost:

When I checked the lab results the next day, it said

a. Blood chemistry: sodium and potassium, within range.
b. Stool examination: negative for intestinal parasites

In short, no problem. Meanwhile, check the above costs: ER fee + laboratory fees + medicines = P1,680. Medicines share is only 10.5 percent and almost 90 percent is for laboratory and ER fees. Which shows one again:

1. Cost of medicines is not the biggest share in proper healthcare, preventive or curative, and
2. Prescribing medicines is not the first thing that good physicians do. It’s ordering various tests first (at least for any fever, high bp and pulse rate; blood and urine/stool tests if necessary) then prescribe the appropriate medicines after. 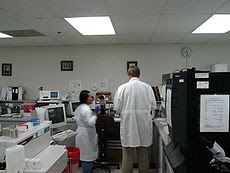 In cases of hospital confinement, they usually make follow up tests in blood, urine, stool, etc. to see if the patient’s situation has improved after taking the earlier batch of medicines. If the patient’s condition has not improved, then physicians have to change the medicines and other treatment. It’s often the frequent or repeated laboratory and diagnostic tests, plus PFs, that take up a huge cost of hospital and healthcare.

In a related post below, PhilHealth Watch 10: Hospital Bill Deductions, I gave a breakdown of the confinement bill of my daughter at the same hospital. Drugs and medicines -- mainly the intravenous (IV) fluid inserted in her hand to control dehydration – constituted 26 percent of total bill, which is similar to the 26 percent share of PF and hospital room and board.

But many groups including legislators insist that medicine prices are the single biggest cost of healthcare. It might be true for a few cases but I think that in most medical cases, it’s not true. So do we hear them calling for price control of fees for laboratory and diagnostic tests, price control for high professional fees, price control for rates of hospital rooms and other hospital facilities?

Nope, we do not hear such clamor. We only hear clamor for drug price control, which I have argued in many blog posts here, is wrong. My book, Health Choices and Responsibilities, has explored in greater details, why the policy is wrong.

And this goes to show the rather segmented or parochial view that many groups have taken in healthcare. There is big focus on medicine prices. Irrational drug use, substandard or fake drugs, the rising cost of diagnostic tests, PFs, the need for healthy lifestyle and preventive healthcare, among others, very often do not get equal high attention.

On another note, I saw this in The Economist magazine. They made a good observation: drug spending may appear "high" for some economies, but they help improve health outcome, which prevents hospitalization of the people.

It is no secret that rich countries spend lots of money on health—9.6% of GDP in 2009. Drugs’ role in driving this spending is more complex. Consumption of drugs has risen, as there are more types of pills and more old patients to pop them. In 2009 OECD countries splashed out more than $700 billion on drugs, nearly one-fifth of all health spending. But without drugs health costs might have been even higher: pharmaceuticals can prevent costly hospitalisations. From 2000 to 2009 spending on drugs grew at a slightly slower pace than total outlays on health. This picture masks substantial variation. The average American shelled out $947 for drugs in 2009. Just across the border, the average Mexican spent just $249.