Over-eating, one of modern society’s vices, which contribute to high incidence of fat if not obese people, which can lead to various non-communicable diseases (NCDs), which is now the leading cause of death worldwide, has somehow victimized me. Nope, I’m not fat, never got fat in my entire life, it’s just that I experienced a possible case of food poisoning in this holiday season of frequent parties. 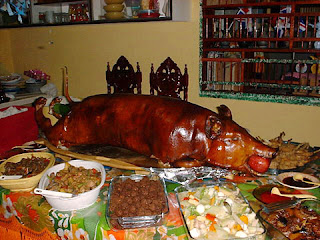 Last December 22, 2011, I went to the ER of the Iloilo Mission Hospital (IMH), the same place where my daughter was confined that day due to bad vomiting the night before. I was suffering from frequent LBMs that day and the night before. I attended a lunch buffet Christmas party the day before. I over-ate, I devoured lots of lechon baboy, crabs, shrimps, fish, chicken and pasta. I also gulped two glasses of drinks. That evening, my LBM started while my daughter Elle Marie started vomiting. While I suspected some food poisoning from that lunch buffet, others who went to the party – my wife, in-laws, nanny, etc. – did not suffer the same bad fate as I and Elle Marie experienced.

After taking some medicines and oral rehydration solution (ORS), plus good rest and sleep, my condition has improved. Now I will remember more often the adage: do NOT overeat in a buffet table. Maybe in some prestigious restaurants and hotels (say attending a big seminar or conference), it is safe to over-eat 

Meanwhile, here’s an article from Jarius Bondoc, on the dangers of over-eating and over-partying as explained by a cardiologist friend, Dr. Anthony “Tony” Leachon. Tony has retired as medical director of Pfizer Philippines and is now a “one peso a year” consultant to the DOH and WHO on NCDs.


Call him a killjoy, but Dr. Antonio Leachon is cautioning everyone against bingeing these days leading up to Christmas. We might succumb to the Holiday Heart Syndrome. That is, suffer heart attack or stroke due to overindulgence.

The week of Christmas can be most dangerous, Leachon warns. Parties get to be more often, and people are stressed from shopping and traffic, and tired from squeezing party preparations into work. They overeat and drink to de-stress. The chances of myocardial infarction or cerebral hemorrhage are higher soon afterwards. For those who drive drunk, chances of fatal accidents are higher as well.

A cardiologist and internist, Leachon draws from studies abroad to bolster his own domestic researches. Dr. Robert A Kloner of the Heart Institute, Good Samaritan Hospital, Los Angeles, is one source. Kloner had noted that the incidence of sudden death rises in the US during the little over one month from Thanksgiving to New Year’s Day. He attributes it to under-workout, stress and overindulgence. The cold weather constricts blood vessels. Merrymakers drop dead from the combination of unhealthy lifestyles.

Leachon says the holiday season is longer in the Philippines. It starts on the first week of December, encompassing Christmas, New Year and Three Kings’ Day, then extending to the Chinese New Year and Valentine’s. It’s not only the no-exercise, higher stress, and overeating and drinking that’s dangerous. There’s also the noise and air pollution from extra-loud music, and fumes from cigarettes and fireworks. Most holiday heart attacks and strokes in the Philippines occur in the early morning, when temperature is cooler.

A peso-a-year consultant of the health department for non-communicable disease, Leachon warns that heart and stroke patients are no longer the usual rich seniors. They’re getting younger and cut through all social classes. It’s because the Generation-X, now in the 30s, grew up in videogames instead of traditional physically strenuous sports. Junk food and soda, cigarette and alcohol are also readily available to rich and poor alike. Sixty percent of Filipino deaths today is due to non-communicable diseases: heart attack, stroke, diabetes, cancer, and lung ailment.

Workout is not enough, Leachon says. An average male must limit his intake to 1,800 calories a day; a female, 1,500; a serving of French fries gives 500 calories, a third of the day’s limit, but an hour on the treadmill can burn only 300 calories. Restraint is best. Cut down on the lechon, beer and, most of all, salt and sugar — now.
-------

Finally, I’ve had the 3rd and 4th opportunity to donate blood to some friends recently, but my offer was rejected. Late last month, a friend posted in facebook that his cousin needed a blood type O donor. The patient has leukemia, had bone marrow transplant a few months ago, then had pneumonia a few days when he posted it in facebook. I volunteered to donate my blood, I’ve donated twice in the past, see Tips in Blood Donation, Part 1 and Part 2. It’s time to remove the old blood in my body and allow new blood cells to grow.

I drove from Makati to St. Lukes hospital in Quezon City that night. Having donated blood twice, I thought I know all the “NOs” in blood donation already, like donor should have no hypertension, non-smoking, no maintenance drugs, no alcohol the previous day, no tattoo, no tooth extraction the past few weeks, etc. After submitting the blood donation form at the extraction room, a staff noticed that my lower lip was swollen and had spots of blood in my hand. I had sore mouth (“singaw”) then, it dried but when the wound is cracked, blood would come out. The staff wanted 100 percent safe blood donors for this very delicate patient and fearing that my blood would be infected, they rejected my offer. I understand their concern, so I headed for the exit.

The next chance to help a friend was early this month. I was checking my facebook when a friend whom I have not seen for the past 6 years or so, Joei Villarama, posted that she needed 3 blood donors for her operation the next day. She was confined at Makati Medical Center, which is just 4-5 minutes walk from our office building. I replied that I will come to donate my blood.

Problem though is that I have a few bottles of beer in my body the past 14 hours or so. My father in law in Iloilo was in town, and we had some nice chats the previous night. I was not sure if the prohibited period of alcohol in the body is 12 or 24 hours prior to blood donation, I went to MMC blood extraction room and asked about it. They said at least 24 hours of alcohol free body and blood, meaning my offer to donate is rejected once again, sigh. Nonetheless, I just visited Joei who was at the 5th floor of the hospital. She was a few weeks pregnant for her second child and something has to be removed from her tummy. What a way to see and talked to an old friend, in a hospital bed.

So, two additional lessons or tips for potential blood donors:
1. Do not underestimate “minor” injuries like mouth sore, they can be ground for rejection.
2. Do not over-drink (argh!) because you don’t know if you will give blood to a good friend (or family member) the next day.

For parents, guardians and matured adults, tell your kids and friends, do NOT have permanent tattoo in any part of their body. They may be perfectly healthy, non-smoking, non-drinking, etc/ but if any family member or good friend will be needing an immediate blood donor someday, tattooed people are prohibited from giving their blood.

Sidenote: Joei’s OB then is a friend, the wife of old friend Sam, Dr. Nabie Aherrera. Nabie was surprised to see me in the room. I told her that when Pilipinas Forum had a grand get together in their house 10 years ago, Joei was among those who came. Small world eh.
-------

Over eating is indeed a vice, apt for the food-greedy people. You're lucky that nothing worse happened to you.