One of the tricky questions in dealing with non-infectious or non-communicable diseases (NCDs) is healthcare financing. If people will over-eat or over-drink or over-smoke, and they get various types of NCDs (diabetes, cancer, hypertension, high cholesterol, respiratory problems, etc.) that affect their productivity and by extension, an economy's overall productivity, who should shoulder the bulk of treating such costly and messy diseases?

There was a good discussion in The Economist four months ago but which I saw only today. It discusses the irony of poor economies in Africa and elsewhere which have some facilities against infectious diseases, but very lacking in treating NCDs and the latter are now the main killer diseases in the continent

Poor countries are developing the diseases of the rich, with lethal consequences 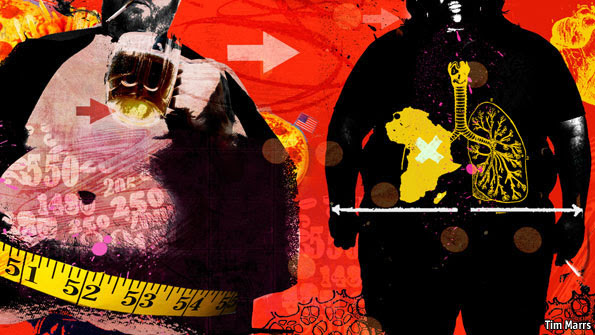 THE Uganda Cancer Institute is on a hilltop with a fine view of the verdant capital, Kampala. But most of its patients are too ill to stand. They have spent their life’s savings for a chance of a cure, but most die within weeks of being admitted. “They come too late,” says Jackson Orem, the clinic’s director.
Of Ugandans who die of cancer, 96% never see a medical practitioner. The country’s health-care system was designed to treat infectious diseases: the institute’s neighbour is a big tuberculoWsis unit. Non-communicable diseases such as cancer, diabetes, and heart and respiratory ailments have not been priorities. Dr Orem’s institute has the only cancer unit for the country’s 34m people. Kidney failure (a result of diabetes) is a death warrant. Uganda has only seven dialysis machines. The cheapest transplant (in India) costs $40,000.
Time was when people in poor countries were too hungry and hardworking to be obese, could not afford cigarettes and mostly died before the ailments of ripe middle age kicked in. Non-communicable diseases were a rich-world problem. Not any more. Affluence and urbanisation mean new kinds of unhealthy lifestyles. Developing countries already bear more than 80% of the burden of chronic illnesses. Their share will grow—at a time when older diseases are still ravaging the poor. In India over two-fifths of children under five are malnourished, yet obesity is mushrooming....
So here is a situation where supposedly poor people are dying of various types of cancer and diabetes, most likely due to being fat or huge intake of sugar, salt, alcohol, tobacco, and so on. And the WHO and other rich governments are proposing, often implicitly, that governments should take the primary responsibility in treating these kinds of diseases. Below is a chart from the same article above.

I would like to believe that if people have the resources to spend on heavy eating, or heavy drinking and/or smoking, and since they know, fully or partially, that excessive intake of those things will lead to some undesirable health outcome someday, then they should have resources also for future treatment, fully or partially. Now, since the prevailing belief is that "health is a right" and access to healthcare is a government responsibility, such provisions are often enshrined in various national laws if not in the country constitution itself, plus various international and multilateral health agreements, there is a tendency for many people afflicted with such diseases to feign poverty and expect or demand bigger government subsidies for their personal maladies.

Of course these people know that no one put a gun on their heads so that they should have higher than normal consumption of food, soda, alcohol, tobacco and other stuff into their body. They know that it was mainly personal choice for their lifestyle, including having a more sedentary living.

The best treatment against NCDs is preventive, not curative. These include, among others: One, restraint from regular high consumption of food, alcohol and related stuffs,coupled with a sedentary lifestyle. And two, getting vaccinations if such medicines are already available at a more affordable price.

It is important to remind people that healthcare is first and foremost, a personal and parental or guardian responsibility, not government's. Government assistance and subsidy should better be limited to preparing for, or treating non-infectious diseases..
------

Email ThisBlogThis!Share to TwitterShare to FacebookShare to Pinterest
Labels: NCDs, Uganda healthcare, WHO