Pol. Ideology 23: 25 Years of Liberalism in the Philippines 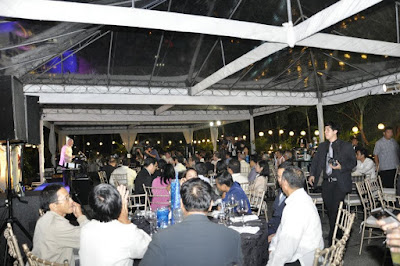 Yesterday, the Friedrich Naumann Foundation for Liberty (FNF) Philippine Office celebrated its 25th year anniversary. The FNF has no office in the country until 1985. After the 1986 People Power Revolution and the start of the Cory government, FNF put its office here, and they have been doing well.

Since we formed Minimal Government in 2004, I have attended many big activities of the FNF, via the Economic Freedom Network (EFN) Asia annual conferences. It was the endorsement of Ms. Jo Kwong, then VP of the Atlas Economic Research Foundation, that enabled me to attend the EFN Asia conferences in 2004 (Hong Kong), 2005 (Phuket, Thailand), and 2006 (Kuala Lumpur) as there was a one-day Atlas-FNF forum prior to the EFN Conference, same venue.

My personal ideological adherence is liberalism. I like that philosophy's strong advocacy on individual freedom, personal responsibility, property rights, free market, human rights and rule of law. For me, it is the most superior among all other political ideologies if one is to value individual rights and responsibilities. The individual is the smallest social unit in any society. If a government or other social institutions will persecute the individual in the name of the collective, the commune, the nation, etc., such subjugation is unfair and unjust.

The FNF is working with the Liberal Party (LP) in this country. While I believe in liberalism, I do not necessarily believe in the LP. In my observation, there is a disconnect between the philosophy and the policies and advocacies of the liberals in this country. 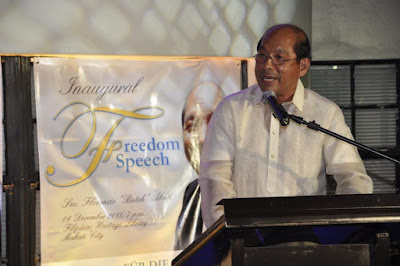 Anyway, FNF plans to hold an annual "Freedom Dinner" and last night was the inaugural and the first Freedom Speech was given by LP stalwart and currently DBM Secretary Florencio "Butch" Abad. Butch shared his experience as a former activist during the Marcos dictatorship, how they (along with his wife. now Congw. Dina Abad, other activists) were running and hiding to evade being arrested but they were ultimately arrested and imprisoned. Experiences like that, one would really appreciate what is Freedom -- freedom from political persecution, freedom to speak one's social and political views, freedom to pursue social and economic interests without trampling on the freedom of others.


Later Butch talked about the social policies of the current administration, the first time that the LP is in power after so many decades. Many of the policies of the current administration I do not consider as upholding liberalism and in fact, are veering away from it. Like the policy of living beyond one's means, of over-spending even if revenues are not sufficient resulting to high budget deficit, so they resort to endless borrowings, which results in ever-rising public debt, which results in ever-higher interest payment and future economic uncertainty of the government's capacity to pay all those huge debts. The on-going debt turmoil -- by governments -- of the US and many European countries is testament to the seriousness and dangers of rising public debt burden. 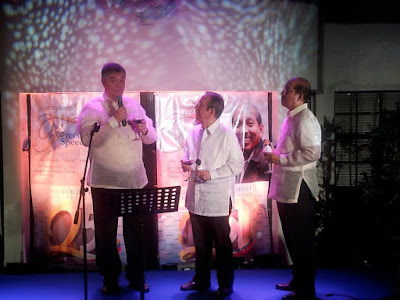 Jules is a cool guy, he's been with the country office for more than a year now and he was able to befriend many personalities here who work on any of the major advocacies of liberalism -- free market, human rights, rule of law, etc.

There were two groups of entertainers that night. A band (top left) and famous folk singer Noel Cabangon (below left), here singing his new composition "I am Free", nice song. He sang it for the first time during the Freedom Run two weeks ago. See my story here, Competition and Government 6: FNF Freedom Run 2011, November 28, 2011.

The program MCs were Maita Gonzaga and Chito Gascon (top right) while those who announced the winners of the Liberal Project were Lito Arlegue and a faculty member from the UP NCPAG (below right). 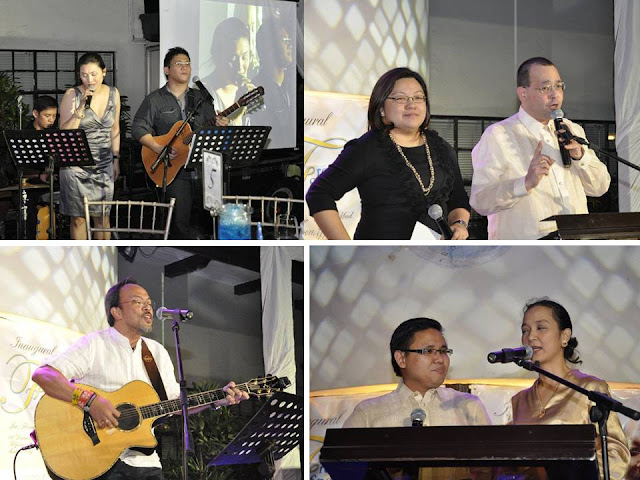 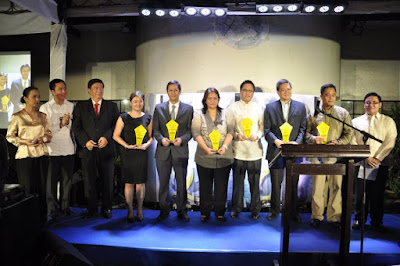 The winners of The Liberal Project, programs and legislative proposals that promote good governance, human rights, citizen empowerment, etc. I like the projects on "Yellow Boat" in Zamboanga, where an NGO gave boats to elementary school children who used to walk (or swim sometimes) on breast-height water just to go to their schools. They naturally suffered some diseases or injuries as they go through this process twice a day (to and from the school) five days a week. I was touched by this project, truly deserving of an award.

Another awardee that I admired was the "Eskwelahan sa Selda" in Tagum, Davao del Sur. Here, prisoners were taught basic literacy (reading and writing) and other skills. Some convicts expressed happiness that now that they can read and write better, they can take on more productive work and not return to illegal if not criminal activities when they go out of prison someday.

But some awardees, in my bias mind, do not deserve the prize. For instance, the UNDP, on project related to the MDGs. But I was not one of the judges of the competition, so I just have to respect whatever judgment they made.

After the program proper, a band of three people (female singer, guitarist and drummer) performed many good songs. I jammed from time to time, like when they sang a few songs by the Beatles. Food was also nice, but there was no beer, only red wine. And while sipping wine, I approached Rainer Adam (below speaking), the FNF Regional Director for East and South East Asia. I have known Rainer since 2004 and I see him about once a year on average. I told him that I really admire his work and the work that FNF is doing in our region. 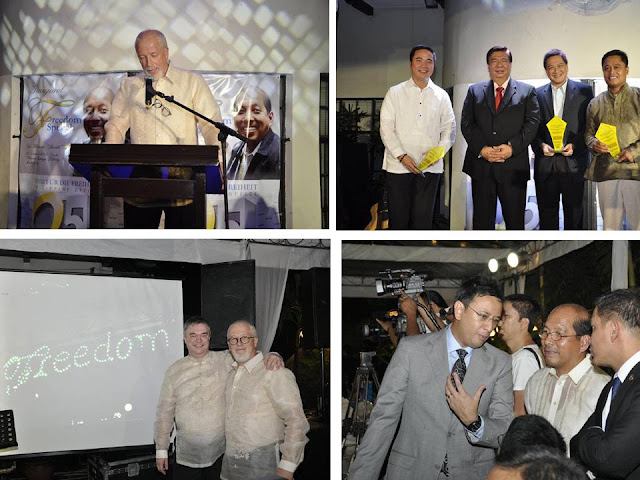 I think that Filipino liberals, especially top LP officials and legislators, need to review again what liberalism is, the political philosophy, and how their party advocacies and programs can match with the ideology. It is wrong to often subjugate individual freedom in the altar of national or collective concerns. It is also wrong to reward individual irresponsibility and laziness with various subsidies and welfare, and to penalize hard-working and ambitious individuals with lots of taxes and regulations, just to force equality in society.

Achieving a more equitable society is understandable. But if people are free, they can choose between hard work and laziness, between self reliance and dependence on others, between excellence and mediocrity. What the government should focus on, is the promulgation of the rule of law, like the fight against corruption and nepotism, the fight against bureaucratism and the culture of prohibition in government (things and activities are not allowed unless people get permits from the government).