Compared to most ideologies -- socialism, communism, fascism, autocratism, liberalism, republicanism, etc. -- democratism, or belief in democracy, "rule of the people, by the people, for the people", seems to be the most popular worldwide. Even dictators and autocrats would call themselves as practicing democracy in one way or another.

I think that apart from liberalism, most other ideologies including democracy, have taken the BIG government as the default mode, even implicitly. Individual liberty often takes a back seat compared to "collective good" or "national interest" or "communal aspirations". Thus, the main agenda of most of those ideologies is to have "good governance" and to limit abuse of political power by the ruling political party, clan or monarchy.

Among my friends in facebook that I follow more regularly is Dr. Zosimo Lee, a professor of Philosophy at the University of the Philippines (UP). He was actually my teacher in my Philo 11 (Introduction to Philosophy) class in my undergrad in the 80s. Below I post two of our exchanges, dated December 6 and December 16 (today), respectively.

Below are among the Asian dictators who are now out of power. This is related to Sir Zos' first discussion, below. All photos are from wikipedia. 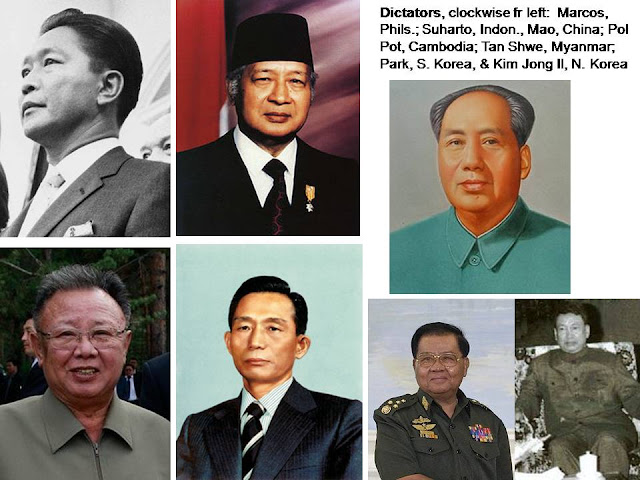 Zosimo Lee: Adrian Karatnycky and Peter Ackerman report that of the 76 authoritarian regimes that were dismantled between 1972 and 2002, more than 70% were the result of nonviolent civilian uprisings. Maria Stephan and Erica Chenoweth found that nonviolent uprisings tend to be more effective than violent campaigns. Of the hundreds of resistance campaigns over the past century, nonviolent movements were successful 58% of the time against only 26% of groups employing violent tactics achieved their goals. These are significant findings.

Nonoy Oplas: People in general are rational. They dont want to do violent things whenever possible. But some people are simply irrational, these include dictators, bureaucrats and military officials. They often live unproductive life, meaningless work, like having bloated military supposedly to protect against external aggression even if such threat is zero. Thus, violence often starts from this unproductive sectors of society who want to live and retire being fed by taxpayers.


Zosimo Lee: I agree that people in general are rational, for the most part.

Nonoy Oplas: Thanks Sir Zos. One big enemy of dictators, despots and corrupt bureaucrats, is public information. It was easy to mow down and mutilate hundreds of protesters before when there were not too many cellphones with camera, digicams, and no fb or twitter, etc. Now people don't need traditional media to take photos or video of major or minor pol and econ events, and dictators are afraid to be seen around the world as killing hundreds of people. The pol pressure to step down is larger than the dictatorial urge to kill more people.

And we go to the next phase. If people are more informed, they know what's good and bad for their own health, household income, etc., they can manage themselves better, why are governments that tend to nanny people (or pretend to be a big nanny) remain big if not expanding bigger? The huge public debts they incur in their futile attempts to remain a big nanny show that the experiment is wrong.

Zosimo Lee: it is indeed a good phenomenon that with people's capacity to disseminate news and political views faster and more ubiquituously has totally weakened any governmental control of mass media. and with more access to information, hopefully citizens are more involved and are able to generate their own thinking and opinions about matters of State.

I did not make a follow up comment after his last comment. But I wanted to point out that citizens should generate their own thinking and opinions beyond matters of the State. More importantly, they should generate their own thinking on matters of themselves, as free (or aspiring to be free) individuals, and how much personal and parental/guardian responsibility they should take up to run their own lives, their own households and their communities.

Our second exchange, today, is on democratic deliberations, which I initially thought would be equivalent to democracy. It was good that he corrected me on it.

Zosimo Lee: Democratic deliberation means mutual respect and accommodation of social, cultural and ideological differences. We have political virtues familiar since Socrates: open-mindedness, avoidance of dogmatism, a willingness to discuss differences, to listen to others, to take their views seriously, to change our minds when we see better reasons, to see things from the perspective of others, to weigh judiciously the pros and cons of issues. Deliberative democracy means unrestricted public reasoning and seeking the best possible reasons as much as possible following self-imposed objective criteria.

Nonoy Oplas: One problem of democracy is that it is majority rule. There are many instances that the minority is bullied and coerced by the majority. The individual, the smallest minority in society, is often disregarded once the majority and the mob has ruled and implemented their wishes and idiosyncracies.

If the majority will demand, "we want free educ to college, we want free healthcare, we want highly subsidized housing,..." and their wishes become laws, then democracy will lead society to socialism. Never mind who will pay for all those endless subsidies, democracy will persecute those who won't contribute to such high spending because the majority rule says their wishes should be upheld and implemented.

Nonoy Oplas: Agree, but defining what can be "objective" can itself be a source of disagreement. Take the RH bill. It is obvious that it is a very divisive bill. Instead of respecting the opinion of the opponents, the proponents want mob rule, majority rule, and coerce even those who don't support the philosophy and schemes of the RH bill to support it via taxation and regulations. The middle ground and consensus solution that I see, is for those who support RH, use their own resources to purchase the tools they think are needed to control population, no one is coerced to supporting something against his free will.

Basic liberties require non-aggression, non-coercion, plain volunteerism. For instance, if I have a "bright idea" how to reduce poverty in my community, I won't force anyone in the community or country to contribute money by force to finance my so-called "bright idea". Because if it is indeed a "bright idea", funding and voluntary donation will surely come. An idiotic idea masquerading as a bright idea will have to be financed by force and coercion, like taxation.

Zosimo Lee: at least, I know you will agree with me that while defining what is objective is challenging, it is better that we govern ourselves by what most every rational person can recognize as valid and objective, rather than whimsical, idiosyncratic, subjective in the negative sense, and non-communicable. we should be able to establish what we can accept communally as basic grounds for decency, rationality and some measure of objectivity, difficult as it may sound. we as a national community have implicit and latent norms of what we consider to be right, it is a matter of advancing better articulations of these intuitions so that we can hope to arrive at a more or less acceptable consensus on this articulations, even as we accept that these will always be contested.

Nonoy Oplas: Right Sir. I would equate your desire to have a "valid and objective" criteria, goals, as the "rule of law". Because the law applies to all, no exception, it applies equally to unequal people, it is important that laws should be as general as possible, even "abstract" that it is blind to whom it will apply and hence, whom will be punished when the law is violated.

On "what we consider to be right", especially rights and social entitlements, this is a highly debatable and divisive topic in itself. For instance, "healthcare is a right", "education is a right" and society, through the government, should provide such rights and entitlements to all citizens regardless of sex, religion, race, cultural belief, etc. My earlier discussions above would provide elaboration on why I think this is a highly debatable concept.

Zosimo Lee: lahat naman ng rights, may katumbas na obligations, if we posit the possibility of a scheme of social cooperation where everyone benefits from the goods and services that are provided by everyone in non-exploitative relationships, there is an synergy that can be mutually advantages, it is not always from a limited and partisan perspective that rights can be considered but from a systematic and wholistic manner. there are no rights that do not demand or require obligations, and if there is a scheme of social cooperation for the mutual enhancement and flourishing of each one, even government need not be considered dominating nor coercive but truly an instrument of the public welfare.

I did not make additional counter-comments. Anyway I also believe that a "scheme of social cooperation for the mutual enhancement and flourishing of each one" is possible -- via voluntary exchange. There will be more opportunities for an exchange of ideas with Sir Zos in facebook. :-)

The important thing is that people will be made aware that there is responsibility to each and every right and entitlement that is being demanded. If we decouple or separate rights from obligations, freedom from responsibility, it will be a hollow definition and practice of rights and freedom.
---------