Lifestyle Diseases 8: WHO and the NCDs

After HIV/AIDSe, the next big scare being peddled by the United Nations and the World Health Organization (WHO) is the threat of non-communicable diseases (NCDs). AIDS, like SARS, bird flu, malaria, dengue, are communicable or infectious diseases. A healthy person can become ill in just a few hours after being bitten by a dengue-carrier mosquito, or become AIDS positive if he/she has sexual contact with another person who has the disease. That's the threat of communicable diseases. 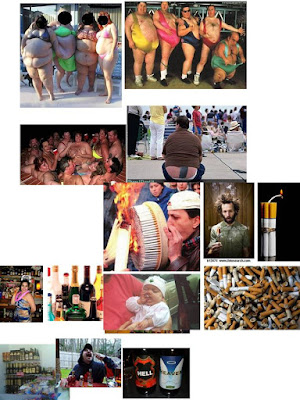 But NCDs -- due to heavy eating (obesity result), high tobacco and alcohol use, sedentary lifestyle, etc. -- like "man-made climate change", are now more scary than infectious diseases, according to the UN, WHO and the health Departments/Ministries of many government. How valid is this warning?

Today, I attended a short lecture at the Asian Development Bank (ADB) given by Dr. Cherian Varghese, WHO NCD and Health Promotion Unit. His paper was entitled A Perfect Storm: the economic and social impacts of noncommunicable diseases in Asia and the Pacific. A "perfect storm", really? The title for me, is very alarmist.

I took photos of some of his 38 slides, hard copy handed out.

One slide that serves as the presentation outline, says that "more people are obese than undernourished" which implies that people are more well off these days. Then another slide shows the "Cycle of Poverty and NCDs" which implies causality between the two. These two statements are contradictory. More people are suffering from NCDs because they are more economically well off, they eat more, they drink more, that is why many people are fat if not obese. But another slide says people are poor so they have more NCDs. I don't buy this latter analysis, sorry. 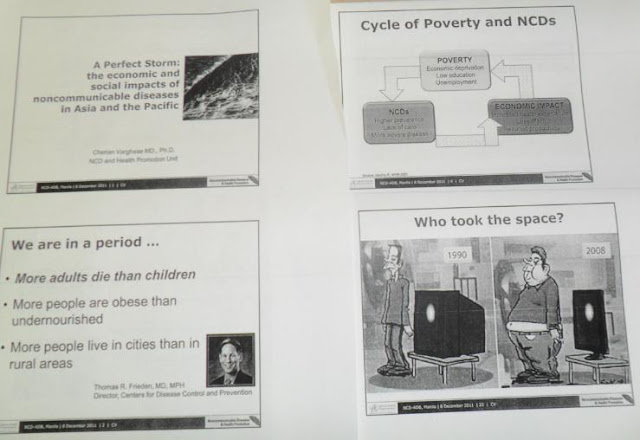 Other slides say that NCDs are the no. 1 killer around the world, that they claim over 2/3 of all deaths, or some 36 M deaths per year. This does not look so scary if we consider that the lifespan of people is rising in many countries around the world. So before, the "good news" was that people were dying of infectious diseases, the bad news was that they die young, something like 50 yrs old average life expectancy. Now it's the reverse. The good news is that people are living longer (70+ for developing countries like the Philippines and 80+ for rich countries like Japan and the US), the bad news is that they are dying mostly due to NCDs.

The estimated economic burden of NCDs according to one slide: some $7.28 trillion in 2008 for both low and middle income countries, mainly due to cardio-vascular diseases (CVD), respiratory diseases and cancer.

Check another slide: "Noncommunicable diseases contribute to poverty and poverty increases the
risk of developing NCDs and worsens their outcomes. Not addressing the NCD epidemic will
lead to a a shrinking workforce that curtails growth." Here the WHO is repeating their "poverty-NCDs cycle" theorem. Isn't it that people are eating more, drinking more, smoking more, riding cars more (not walking or cycling) that is why they have CVDs, respiratory diseases, lung cancer, liver cancer, meaning people are getting richer, not poorer?

Usually people who have the means to eat more and drink more, also have extra resources for their personal and household healthcare. So they work more and earn more in preparation for such NCDs and infectious diseases like dengue or AIDS.

The recent UN high level meeting on NCDs, about three months ago, was indeed a big event, which signified big intervention by governments, the UN, WHO and foreign aid bodies, to tackle the problem. 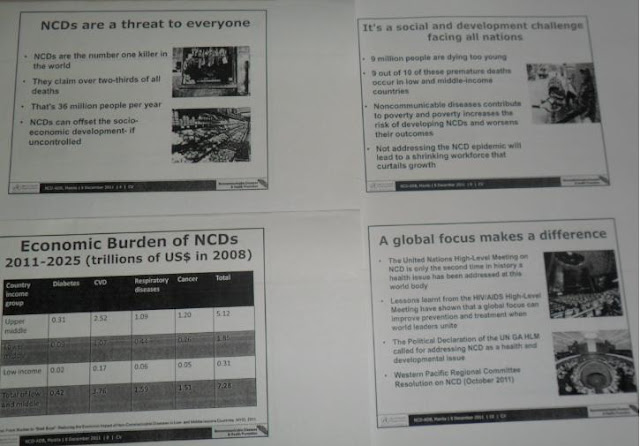 Such bigger government interventions are already incorporated in many UN and governments' programs and goals like the MDGs -- more spending on education, housing, health; smoke-free laws, immunization, tax hikes for tobacco and alcohol products, etc.

So the WHO's "best buys" proposals include: tax increases for tobacco and alcohol products, banning tobacco and alcohol advertising, public education against sedentary lifestyle and unhealthy diet, hepa B immunization against liver cancer, screening and treatment against cervical cancer, etc. I personally support raising the taxes on alcohol and tobacco products. But government should also reduce -- and abolish over the long term -- income tax. Let people have more personal savings so they can have more resources for health insurance and other out of pocket (OOP) spending for healthcare.

The WHO says it's easy to fight malaria because "there are no international consortia of mosquitoes." True. But there powerful forces to fight NCDs -- like British American Tobacco (BAT), Philip Morris, JTI and Campari. For me, the latter is partly true. The other truth is that no matter how much government and the UN will warn against the danger of smoking and drinking, many people just want to smoke and drink. If you totally ban for instance all BAT and PM products, people will still smoke other cheaper tobacco brands, or source from smuggled tobacco, or make local and home-made tobacco and cigars. They just want to smoke and drink.

So the UN and WHO are looking at 10 percent reduction in tobacco use by 2014. I hope it will be attained, or even be surpassed. The goal of raising tobacco taxes in the Philippines soon, I doubt it. Many members of the House of Representatives, especially the Committee on Ways and Means, are not exactly your saintly legislators who will refuse money and lobbying from the big tobacco companies. Besides, granting for the sake of argument, that out of a miracle that tobacco taxes will be raised by 100 percent, even 500 percent, the probability of tax cheating and tobacco smuggling will become even higher. So such government interventions have their natural limits. 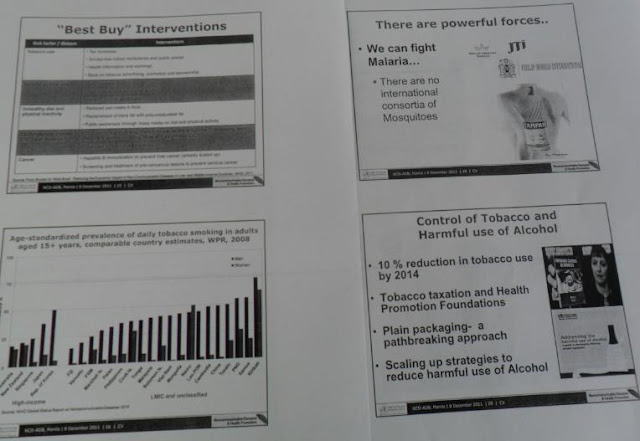 During the short open forum, I asked Dr. Varghese something like this:

Is the WHO also proposing that there should be more government funding for social health insurance (SHI) to deal with NCDs? Most SHIs around the world are government-monopolized, like PhilHealth. If you propose that, economies will go bankrupt because treating NCDs is a bottomless spending, unlike treating infectious diseases.

He answered that governments should spend more on primary health care, more on preventive than curative healthcare. Somehow I agree with this. No more time for follow up question. Anyway, my point is that since many NCDs are lifestyle related or simply self-inflicted, why not leave tackling of such diseases to the individuals and households themselves, with support from charity groups, health NGOs, foundations and other support organizations and individuals. Politicians and local governments can be part of such "other support organizations." If people are made aware that getting a private health insurance, or securing financial assistance from various support organizations for future treatment of NCDs is costly, most likely they will take care of their bodies more responsibly.

While a nanny state can help in this problem, it can also create some moral hazards problem as some people will always think that the government will take care of them when they become sickly someday after inflicting abuses on their own bodies. After all, "health is a right".

Since government is generally an unproductive institution that derives revenues only by taxes and mandatory fees, and there are many competing sectors and interests from different agencies who also want more money, expecting ever-rising public resources for public health is an illusion. The huge interest payment for the big public debt of many governments including the Philippines, the pressure by so many other agencies and sectors for the annual budget, will put a natural limit to such public spending on healthcare. Thus, bigger role for more personal and parental responsibility in healthcare, more private funding of personal health, should be alloted.
--------