Last week’s tragedy in Cagayan de Oro, Iligan and other cities and provinces in Mindanao was really awful and scary. The death of 1,000+ people, mostly children, still sends chill to my body and mind. Pictures of parents holding the lifeless body of their children, or wailing parents looking for their missing children, often send tears to my eyes. 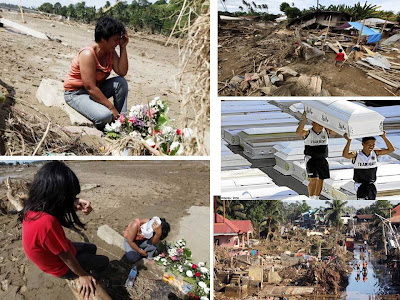 As a father of two young girls, I cannot help but sympathize with those parents. Children can be naughty and disobedient sometimes, they can be wacky and playful too. They do a big “work” for their parents, like saying “I love you Papa and Mama”, or calling their parents when they are in some trouble, signifying dependence and respect. Their smiles and playfulness bring huge happiness to their parents, and the latter work hard to give their kids a good future. And this is how society mainly progresses. People having ambition for themselves, their family and households, along with their community.

We are here in Iloilo City with my family to visit my in-laws for the holidays. The other night, my eldest, 5+ years old Elle Marie, has been vomiting. Initial doses of Glucolyte and oral rehydration did not work, we had to bring her to the emergency room (ER) of a private hospital near my in-laws’ house. The pediatrician who attended to her later said she’s on her way to dangerous dehydration, she needs to be hospitalized. Then there are also blood tests and get a CBC (complete blood count). Elle does not like the sight of a syringe and a needle. She cries a lot when she sees one, she always remembers the pain of a needle in her past vaccinations. Then to control dehydration as she was throwing out even medicines to control vomiting, she was given the intravenous (IV) fluid.

Her loud cries made me approach the pediatrician again, “Doc, are there other alternatives aside from giving her that needle?” The attending staff said “No sir, she is dehydrating and we need to rehydrate her with the IV.”

Of course I was also concerned of the cost of hospitalization even if I have a PhilHealth card. Another concern is that I myself was dehydrating due to several LBMs that night and the day after. It may have something to do with the food we took the other day in a big party. Then my youngest, 1+ year old Bien Mary also had a few bouts of vomiting that night, but not as bad as Elle’s.

It’s two days before Christmas and Elle is still in the hospital, but hoping that she will be discharged today. Her vomiting has stopped after the IV insertion, she was eating solid food yesterday and looked fine to get out today, I hope.

Since I’ve been dehydrating too since two nights ago with several LBMs, and was weak due to lack of sleep, I decided to have my own tests yesterday at the ER. I used my private HMO card for this outpatient service, something that I find really valuable compared to PhilHealth where members and/or their dependents must be hospitalized for at least 24 hours before they can file for some limited reimbursement or cost containment.

My second young kid is too “Papa’s girl” and she wants to go to me anytime and anywhere she sees me. I felt bad that I cannot carry her because I myself was weak and was bordering on having a fever. It pains me hence, hearing her crying loud because I cannot carry her or guide her to walk.

We were supposed to go to the neighboring island of Negros yesterday to visit my old and weak parents too, plus my two other siblings and other folks in Cadiz City. But Elle’s hospitalization meant we have to postpone the trip after Christmas.

My malady or misfortune along with my two daughters, not to mention my wife who is patiently watching Elle in her hospital bed, is nothing compared to the grief and sadness of parents who lost their children in the recent flooding in Mindanao. That is one “consolation” that I tell myself as I stay late writing this article instead of sleeping early to have more rest.

The spirit of Christmas has been terribly hijacked by endless consumerism and shopping in the minds of many people. I believe that many people simply over-shop during this season, thinking that such things can help liven their holiday season. Being hooked to reading and writing as my favorite hobby and pastime, then playing with the kids as much as possible in my extra time, I cannot relate with the over-shopping mentality of many people. But it’s their own lives, not mine, so I can only comment but not intervene in their lives.

Parental (or guardian) responsibility in raising young kids to become responsible adults someday is one important aspect in building a peaceful and prosperous society. People should avoid being dependent on somebody or something else – like a nanny state, or a well-off family member -- whenever possible. There is big challenge and big difficulties for parents to stand up on their own in raising kids. But in return, there is also big parental (or guardian) happiness and freedom when the kids grow to maturity and they understand the close link between freedom and responsibility, between happiness and obligations.

Merry Christmas to us all. And I sincerely wish a more prosperous new year and years ahead for us. There will be more tragedies and catastrophe that will come our way, especially with the deepening global cooling (and more rains, more flood, more snow). It’s how we help our adversely affected countrymen and brothers and sisters, and how we stand up after falling from such debilitating catastrophe, that matters. We just need to keep our ambition and dreams for our kids, our families and communities. And peace and prosperity almost always comes next.
Posted by Bienvenido Oplas Jr at 2:00 AM