The emergence of a first ever President of the Philippines coming from Mindanao has produced ample business opportunities to that big island and its many provinces in the south. After the elections last month for instance, Davao City in particular experienced huge boost in business and tourism.

Overcoming energy poverty or insufficient supply of power and electricity for the people should be among the priorities of the new government. For instance, our average electricity consumption of 672 kWh per capita in 2012 was lower than that of Indonesia, nearly ½ that of Vietnam, nearly ¼ that of Thailand, nearly 1/7 that of Malaysia and almost 1/12 that of Singapore.

There are no comparative data for 2015 so this paper makes its computation, shown in the last column in this table below.

The combined population of regions 9 to 13 plus ARMM in the census August 2015 was 24.136 million (source: Philippine Statistics Authority (PSA)). Gross electricity generation in Mindanao in 2015 was 9,282 GWh (source: DOE)

This means that average electricity consumption in Mindanao last year was only 384.6 kWh per capita. This is less than half that of the national average of 809 kWh per capita, and this may be equivalent to that of Cambodia (207 kWh per capita in 2012).

In terms of actual power generation in 2015, the 17 generating companies (gencos) and 39 distribution utilities (DUs) in Mindanao has produced and distributed 9,282 GWh of electricity, mainly coming from hydro (39%), oil-based (33%) and coal (20%). Geothermal contributed 8% while biomass and solar contribution was negligible.

Coming this year will be Saranggani (by Alsons), San Miguel Davao (by SMEC) and FDC (by Filinvest), all coal plants. Next year, GN Power will further add a huge coal power plant. 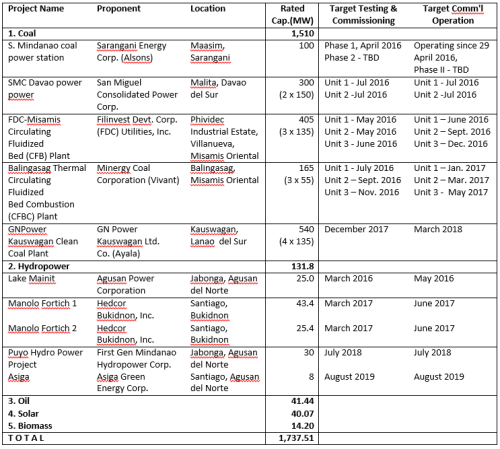 These will result in temporary power oversupply by 2017 and significantly raise the kWh per capita use in Mindanao. But such oversupply will be short-term because demand will simply adjust and rise quickly. Again, note the low per capita electricity consumption in Mindanao compared to the national average, and much lower compared to those in Vietnam, Thailand, Malaysia and other developed Asian economies.

Here are the indicative projects for Mindanao grid. Coal plants will still dominate the field. Once the Wholesale Electricity Spot Market (WESM) operates in Mindanao, it will be a dynamic market for both power producers and consumers. 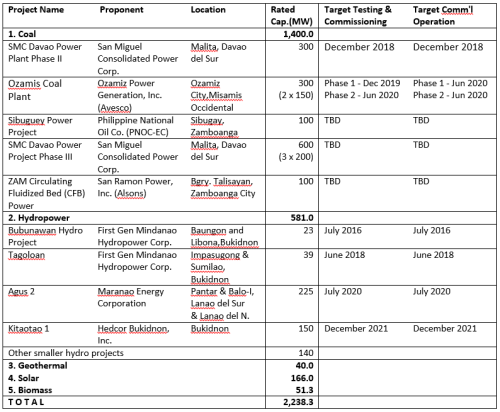 With these initiatives at big power addition in Mindanao, among the policy measures that needed to be put in place are the following.

One, ensure the transmission link between the Mindanao and Visayas grids soon. This will significantly complement WESM operation in Mindanao.

Two, do not reverse many coal capacity additions with anti-coal pronouncements that might possibly come from the DENR and the Climate Change Commission (CCC). Check again table 1 above, the Philippines’ coal consumption even until 2015 is small compared to the coal capacity of our neighbors in the region.

Three, renewable energy development in Mindanao should focus on hydro power, development of new ones and rehabilitation and capacity expansion of existing ones under PSALM, and less on new renewables like wind and solar that require huge FIT allowance and more expensive electricity.

The stance of the new DENR Secretary against mining has an indirect adverse impact against coal power plants. The worst that can happen is a stop in granting DENR’s environmental clearance certificate (ECC) for new coal plants while a mild version is to further bureaucratize and delay for years the granting of ECC and various environmental permits. Both actions will adversely affect power development in the country and prolong energy poverty. This should not happen.

Bienvenido S. Oplas, Jr. is a Fellow of Stratbase-ADRi, a columnist in BusinessWorld, and President of Minimal Government Thinkers.
--------------