President Duterte, I am supporting many of your economic, education, healthcare, agri, energy, etc. policies. But NOT extra judicial killings  (EJKs) by the PNP and other state agencies. Or the  lack of action by the PNP to control EJKs by civilian/vigilante criminals. STOP it, please. 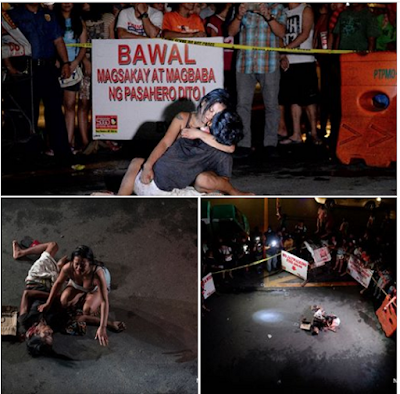 On average, nearly 10 people a day are killed here since mid-May 2016. Zero chance by the dead to defend themselves from accusations.

This "war on drugs" has become a war on human rights. There are many drug pushers and drug addicts, true, but many of these murdered people are also innocent and falsely accused.

Just legalize but regulate the use of drugs. The only things that should be criminalized are murder, stealing, destruction/burning of property, abduction, rape, deception. Many murders were committed when people are not under the influence of drugs or alcohol. Nag-sagutan lang sa parking or nagkatinginan lang ng di magana, nagbarilan or nagpaluan na. Nagselos, na-insulto, etc.
"Less than a month into his presidency, over 300 drug-related killings have been recorded. Most have been shot during police operations. Others were killed by unidentified gunmen and vigilantes." http://www.rappler.com/.../140817-duterte-war-drugs-bloody

During Pres. Duterte's State of the Nation Address (SONA) last Monday, he referred to the above photo and headlined by the Inquirer:

Very insensitive, arrogant statement from a President. Digong, I can NOT support your arrogance on this.

Comments from some friends:

(1) Ted Te: "Human rights must work to uplift human dignity. But human rights cannot be used as a shield or an excuse to destroy the country --- your country and my country." - The President, The SONA, July 25, 2016.

Excuse me? The statement should have ended after "human dignity." It is the first time I have heard "human rights" being characterized as a means of destroying the country. That the Constitution itself declares, as a principle and State policy, that "(t)he State values the dignity of every human person and guarantees full respect for human rights" (Article II, sec. 11) should be enough basis to consider the second sentence as misplaced. It is, by the way, the same Constitution he swore to "preserve and defend."

(This is a personal post made because there is still freedom of expression, even for those who disagree. No attribution should be made to my official designation nor to the institution I belong to.)"

(2) Ruben Carranza: "Extrajudicial killings -- ordering them to be carried out, carrying them out, knowingly condoning those who carry them out, deliberately failing to protect citizens from being extrajudicial killed -- those acts are human rights violations and those acts are arguably impeachable 'culpable violation of the Constitution' offenses. Neither lengthy applause nor high trust ratings can change that. In a better world, the rights of poor pedicab drivers would be protected as much as that of plundering presidents. In a just world, dead ex-dictators would be humiliated with those cardboard signs, not citizens who remain innocent until last their breath because a former prosecutor-turned-president does not in fact know how to prosecute crimes. In a better and just world, impeachment -- not change -- would be coming.

… It is  more decent to say it now, even when they face the disagreement of thousands. It is more urgent to say it now than later -- when the lives that can be saved aren't around anymore."

(3) Bernard Ong: “The Ones Who Walk Away from Omelas” belong to the minority. Most Filipinos accept the death of innocents & collateral damage as "unavoidable" in the indiscriminate War on Drugs. Some would rationalize the killings along one of these: suspects resisting arrest, drug syndicates silencing their own, unknown assailants so can't say they are linked to War on Drugs. As if it's all a statistical coincidence that bodies are dropping - some with "drug addict" placards for easier identification - at the same time as Duterte's War.

I do not associate myself anymore with most Filipinos. I stand for rule of law, humanity, common sense. But I'm not going away. Or staying quiet." 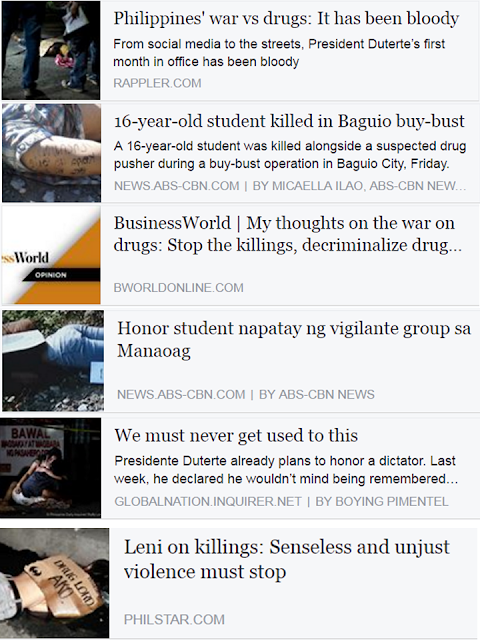 (4) Men Sta. Ana (BWorld): “In short, total prohibition is not the answer. Decriminalize if not legalize drug use. Look at the issue from a health and welfare perspective, not from the lens of criminality Fight addiction and abuse through benign means like harm reduction. This approach will also stem the violence and the human rights violations.”
http://www.bworldonline.com/content.php?section=Opinion&title=my-thoughts-on-the-war-on-drugs%3A-stop-the-killings%2C-decriminalize-drug-use.&id=130889

(5) Boying Pimentel (Inquirer): "Presidente Duterte already plans to honor a dictator. Last week, he declared he wouldn’t mind being remembered like one.

“I will retire with the reputation of Idi Amin,” he said at the San Beda College of Law. “My paradigm is not like here in Manila … In Mindanao, people resort to killings. Why will I change what I know? It is serving the country well.”


The outrageous statement caused hardly a ripple even though Duterte essentially endorsed a thug who was a hundred times worse that the tyrant he plans to bury at the Libingan ng Mga Bayani." http://globalnation.inquirer.net/.../we-must-never-get...