10+ murders a day since President Duterte came to office. Horrible. The dead can not defend themselves anymore if they were indeed drug pushers or addicts or innocent, patay na nga eh. I support Pres. Duterte's admin reforms in many sectors but NOT state-sponsored murders. http://newsinfo.inquirer.net/794942/drug-related-killings-hit-72-since-june-30

Now many people, including sensible and well-educated people are turning a blind eye or even egging the killers and encouraging them. Sipsipan na. Independent-minded NGOs, media and academics kuno, tapos biglang halleluiah to Pres. Duterte and silent to these murders. It is ok to say halleluiah to some or many of his reforms, I do that too, but NOT state-sponsored or Duterte-inspired murders.

I suspect that these supposedly independent people and are deafeningly silent on those Du30-inspired murders are lining up for some consulting work with the Du30 government, or asking for juicy positions. They cannot afford to invite the ire of the govt who can give them multi-million pesos consulting work.

investigation and gather plenty of evidence to secure conviction, so the remedy is to kill suspects. Kesyo nang-aagaw ng baril, kesyo gusto tumakas.

In the Rule of Law Index 2015 Report by the World Justice Project (WJP), the PH ranked very low in Factor 8, "Criminal Justice" compared to its neighbors in East Asia. In particular, sub-factor on Discrimination in the justice system is very low. Meaning pag may kakilala, lusot. Also low score in sub-factor on criminal investigation. Short cut, kill agad.
http://www.bworldonline.com/content.php?section=Opinion&title=Criminal-justice-and-the-Duterte-presidency&id=129674

Konti pa siguro mga yan na napatay, but government should not make short cuts on due process. Even assuming that 95% of those outrightly murdered are indeed drug pushers, there is still the 5% or even 1% innocent but already dead -- killed by the state. Ang mahirap dito, utak murder na madaming tao.

In the WJP's rule of law index report, SG, JP, Kor, HK have very high scores in criminal justice and hence, no need for state-sponsored murders and summary execution policy. It is the enforcement of existing laws and near-certainty of conviction and jails that reduce or prevent those criminal behaviors.

Blackstone's formulation in criminal law is, "it is better that ten guilty persons escapes than that the one innocent suffer."

If that "only one" murdered person is known or dear to the supporters of state-sponsored murders, I don't know how they will react. More civilized Asians like SG, Korea, Japan, etc. have no state-sponsored murders policy. They have death sentence, like SG, but the victim still goes through the process, have the chance to defend himself/herself in court, process has transparency. Here, no due process, no transparency, kill agad. Very uncivilized, little or no investigation, trabahong tamad. 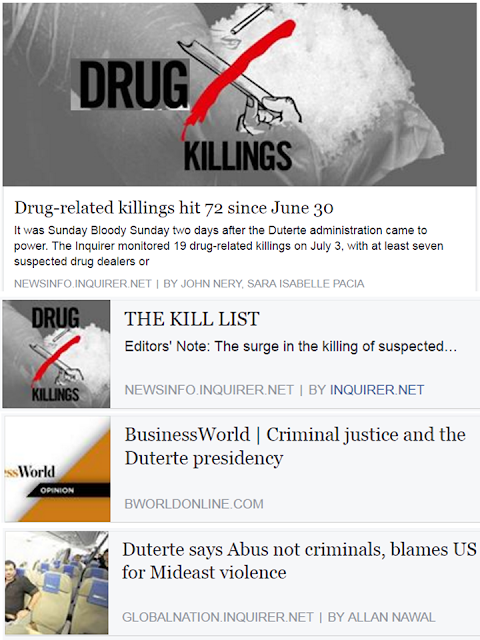 "That’s why I am not including Abu Sayyaf [activities] in criminality. You’ve never heard me say (they are) criminal(s). It is a different setup there because these are the guys who were driven to desperation... There is no sufficient semblance of governance and that is why they are pushed to the wall,” he said, adding: “Then they became radicalized.”

Anong klaseng justification yan, President Digong? The Abus ARE criminals. They are murderers, kidnappers for ransom, terrorists, killers. Get them, armed murderers, or pa simple lang because they are armed, unlike the suspected, unarmed and helpless poor people suspected of being drug addicts/pushers?

Two Canadians so far been beheaded because the ransom money the Abus demanded could not be met, and they are not criminals? Naunsa naman ni. Double standard palagi. Pag Abus and CPP-NPA, non-criminals; pag ordinary drug suspects, criminals, kill agad.
Posted by Bienvenido Oplas Jr at 11:45 AM