Welfarism 32, On forcing restaurants to give their excess food to charities

Sen. Bam Aquino is a bright legislator but from time to time, may churn out lousy bills. Like this one. Food donation can be done voluntarily, no need for legislation and national coercion with penalties. 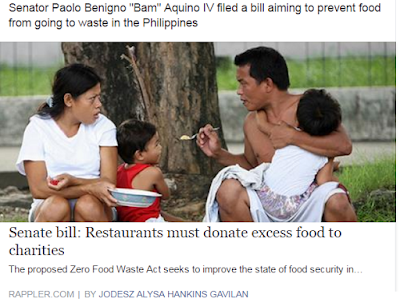 About excess buffet food, some restos do not allow take home. If they do, they make the customers sign a waiver. Pag na food poisoning sila dahil after many hours pa nila kinain yong binalot nila, mag demanda sa resto?

From the news report, it seems that all burden and costs will be on the restos, hotels, supermarkets, etc. Like the cost of transporting the excess food to charities/food banks. And if along the way, the food gets contaminated (from resto to food banks, from food banks to needy people), who will be sued and dragged to jails, most likely not the DSWD or food banks people, but the restos.

Some guys cannot take contrary opinions and resort to personal insults quickly. Like this onion-skinned and near low-life counter-comment by Gus Cerdeña after my similar comments above on his wall:

In my wall, all of my postings and comments are fair game. People can contradict them anytime, no need to resort to personal insults. Focus on the issue, the message, not the messenger. My main message is simple: Things that can be done voluntarily, like food donation by restos and hotels, NO need for legislation and coercion, with penalties, with new bureaucracies to monitor and enforce the new legislation. Statists are OA most of the time. Any "bright idea" they have should be legislated, should be enforced via national coercion. No room for voluntary, civil society action.

The restos decide whether to give away their excess food or throw them away if there is suspicion of any contamination (heavy coughing in front of the food by one or more customers) or saliva contamination by some children or unhygienic persons. That is why it should be voluntary NOT mandatory via legislation and national coercion. The statists are angry that their usual interventionism is contradicted as if they are the only ones who have the monopoly of truth and social concern. OA.

So this bill is bullying. The mandatory price discount of 20% given by restos (and drugstores, airlines, buslines, etc.) to (both rich and poor) senior citizens and persons with disabilities (PWDs) + VAT exemptions (nearly 30% of forced discounts) is another bullying because the cost of forced discounts cannot be credited as tax liabilities. So there will be additional costs to restos, hotels, plus raising the "war chest" vs future legal battles if some poor or pretending to be poor people (pushed by some enterprising lawyers) will sue them because the restos "gave them spoiled food."

One indicator that an idea is lousy is that it should be done via legislation and national coercion. Food donation lang, legislation pa? Many restos and hotels will voluntarily do that, it gives them good PR to the public, that they care for the poor. If they throw away excess food, that is to protect the public from eating partially-spoiled or partly-contaminated food. May buffet food, bayad na, hindi nagalaw, pero may umuubo ng ubo among the customers, spreading possible air-borne virus into the food. If the restos think this can endanger public health, better throw away the food. Now the government will criminalize the resto for that decision? Lousy.

Classical liberalism -- more individual liberty, more personal and parental responsibility, more civil society action -- is the ideological opposite of socialism and welfarism. The latter wants more state, more government, more bureaucracies. You as a person are incapable of helping your less fortunate neighbors, so the state should coerce, force and arm-twist you to help the poor via more taxes, more regulations, more fines, more imprisonment if you don't obey state orders and laws.

I hope that Sen. Kiko Pangilinan will not support this bill by his LP partymate, Sen. Bam Aquino. Keep the liberal philosophy -- liberate the people from too much state nannyism, regulations, prohibitions, penalties, bureaucratism. If people want to donate their excess to others, fine. If not, fine.

Soon, there will be new bills mandating the planting of organic agri only, mandating the donation of excess shoes and clothes to the poor, mandating that kasambahays' kids be provided education scholarship by their amos/employers -- with fines, imprisonment and harassment to violators. Statism by the socialists and state worshippers is lousy, very anti-liberal. Parang wala nang utak ang mga tao for voluntary solidarity with fellowmen, si gobyerno lang ang may utak -- utak pakialamero.
-------------