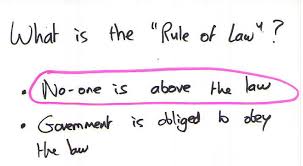 Nonoy is writing an essay, "Rule of law, lawlessness of the State, and State of the nation". Some relevant quotes: "The rules must apply to those who lay them down and those who apply and that nobody has the power to grant exceptions.” – Friedrich Hayek "
July 28, 2009 at 11:21am

Selwyn Clyde M. Alojipan Here's my contribution to your body of knowledge: "With great freedom, comes great irresponsibility."
July 28, 2009 at 11:45am

Nonoy Oplas Right! Therefore we should not allow the State to have more freedom so that it will have less irresponsibility.
July 28, 2009 at 11:47am

Selwyn Clyde M. Alojipan Level of responsibility and accountability should match the level of authority practiced by a leader of the State. It should be easy for a person of high authority to be chastised, his freedom of action curtailed, and/or removed from power if he violates the rule of law. Unfortunately, our Constitution allows any President to have almost complete freedom of action during the entire term of office. Use of power quickly expands to the limits set by the legal restraints and there are few Constitutional restraints set on a President who wants to use all the powers at his/her disposal. People should examine if they want to elect another President who can do as he or she wants under our current Constitution unless pulled down by another People Power revolt.

That's why I now prefer a Parliamentary form of government so that each citizen just elects a person in their district who should be qualified to become Prime Minister but who must also be acceptable to his fellow MPs.
July 28, 2009 at 12:48pm

Bruce Hall To make it easier to overthrow the president, we don't have to change the entire system. All we need to do is making removing the president easier. Switching to a parliamentary system is overkill. It is more change that we need to achieve the stated goal.

Governments need to be more accountable to the people. We can get that by making governance more local. That's why small countries tend to be the best run -- Singapore, the Netherlands, Switzerland, Sweden. The Iloilo government should be responsible for Iloilo--for road, water, electricity, schools, police, trash, fire, etc. Then the voters will choose those candidates for local office that will really do the work. Voters are more familiar with local officials than national. Imperial Manila is so far away and out of touch--and arrogant--that it's an abstraction.
July 29, 2009 at 11:21am

Bruce Hall To uphold the rule of law we need competing power bases fighting against each other, holding each other accountable. We don't need all government power concentrated in one single body, called Parliament or Glorious Leader or whatever. The House should fight against and hold the Senate accountable, and vice versa. President v. Congress. National v. Provincial. Provincial v. Local. Local v. barangay. Voters v. all government. Just as the defense holds the prosecution accountable and as Cebu Pacific holds Philippine Airlines accountable, we need competing bodies and governments to make sure that everyone is following the law. Monopolies undermine accountability and the rule of law. Power corrupts. Absolute power corrupts absolutely. No to monopolies of any kind, government or corporate.
July 29, 2009 at 11:29am

Nonoy Oplas Thanks Bruce. Although I don't think that having various levels of government constantly checking or fighting each other will result in the supremacy of the rule of law. National governments will create laws that will weaken the provincial and the local can't fight back easily.

So we stick to the original premise: the law applies to everyone, no one is exempted, and no one can grant exemption, to the application of the law. No stealing means no stealing whether in national or local govt. or in private houses. No killing means no killing whether one is a politician or a policeman or a petty robber or a beggar. That's the rule of law.
July 29, 2009 at 2:02pm

Bruce Hall The problem becomes how do you enforce the law. After all laws are just words on a piece of paper. You need real institutions, backed up by force, driven by human passions and failures, to enforce the law. People Power is one force to hold govs accountable. Competing governments and institutions are others. Money is the most important.

Nonoy Oplas One important implication of the rule of law is that the number of laws in a country or society will be as few as possible. Because laws as prohibitions and restrictions, will also apply to those who administer the law, the enforcers of the law would rather have few laws to enforce which will also restrict them. Thus, there will be few traffic rules like "no left turn, no U-turn,..." because police and govt. cars will also have to obey such rules. Most traffic problems will have engineering solutions rather than legal and bureaucratic solutions.

Rule of law states that no one is exempted and no one can grant exemption from the law, then those various subsidies will drastically be cut or abolished because those subsidies are favoring certain sectors and exempting other sectors. Less taxes to be imposed as there are less or zero subsidies needed. A strict rule of law regime can later lead to a small or limited government.
July 29, 2009 at 3:24pm

Bruce Hall Designers of governments should not expect people to follow the law just because it is the law. Human beings don't work that way. Some will follow a law out of propriety but not enough. You need real consequences for people who break the law. That means there always must be some other group with some power over the powerful. If there is a single source of power, if all the power is concentrated in one group or person, if there is a monopoly, then there will be no consequences when that group or individual violates the law. Absolute power corrupts absolutely.

Elections, if they are frequent, regular and free can be that check. However if the powerful group also controls the elections, say through a COMELEC, that check on its power is limited.