* This is my article last week in BusinessWorld.

Investments, local and foreign, are like pools of water flowing down. They go where they are allowed and welcomed, not where they are restricted and barred. So government and national policies set the tone and signal if they welcome, partially disallow, or explicitly restrict investments.

Foreign investments are particularly very mobile and flexible. They can come and go in major cities in the world in very short period like within hours or minutes, such as investments in the stock markets and commodities.

Foreign direct investments (FDIs) are for long-term engagement. Once they have decided to come or skip a country or economy, there is little flexibility left because the sunk cost of putting up a factory, hotel, or power plant is huge. It is this type of long-term foreign and local investments that a developing economy like the Philippines should attract and welcome, not restrict and discourage.

The Philippines is not exactly a good haven for FDIs mainly because of the restrictions and the unwelcoming tone of our Constitution where many sectors are outrightly banned to FDIs (media, hospitals, universities, electricity distribution, etc.) or allowed but only up to 40% maximum in total equity investments. Socialist Vietnam has overtaken the Philippines more than two decades ago in attracting FDIs while late-comer Myanmar is trying to catch-up with us, attracting some investors restricted by the latter (see Table 1). 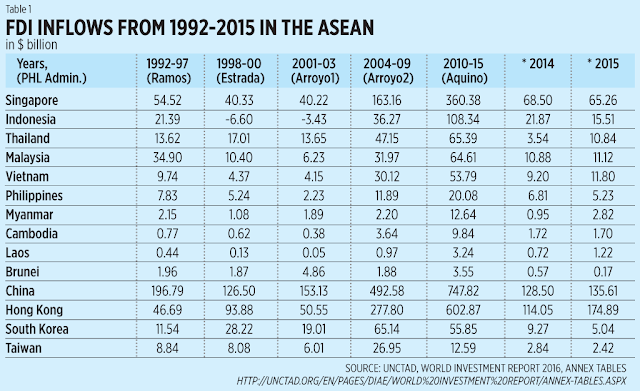 Notice in Table 1 the huge jump in FDIs under the past Benigno S. C. Aquino III administration, almost double compared to the amount attracted by the earlier Gloria Macapagal Arroyo administration.

In terms of accumulated and net inward stock (inflows less outflows of capital) of FDIs, the past Aquino administration has more than doubled the stock in just five years, from $26 billion in 2010 to $59 billion in 2015. Cambodia and Laos have also experienced this more than two times expansion in FDI stock in just five years, but at a lesser magnitude or volume of capital.

Note also the huge volume of FDI stocks in our neighbors in the region, especially Hong Kong, China, Singapore and Indonesia (see Table 2). 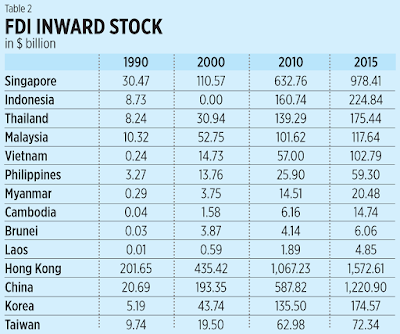 Expanding the country’s productive capacity via increased infrastructure will be one of the panel discussions in the forthcoming BusinessWorld Economic Forum, July 12, 2016 at Shangri-La BGC. The role of foreign investments, finance, and technology cannot be underestimated especially in high capex sectors like telecommunications and power generation.

There are a few big challenges for the new Duterte administration to sustain the momentum of high interest in the Philippine economy by foreign investors.

One is to remove the restrictive provisions of the Constitution and allow 100% foreign equity ownership except in land, something that he promised during the campaign period. This will require changing or amending the 1987 Constitution.

Two, to reduce business bureaucracies, local and national, that discourage many foreign investments even in sectors that they are allowed like power generation. This is already included in the 10-point agenda that his economic team has announced middle of this month. This needs serious implementation and not ningas-cogon, short-term practice.

Three, to reduce or remove various uncertainties that can discourage investments, even if foreign investments are liberalized tomorrow. These uncertainties include the agrarian reform program, which is always extended, and anti-mining, anti-coal power pronouncements.

And four, to erase from the country the terrorist and extortionist groups engaged in kidnap for ransom activities. This is a big turn-off for foreign investors and visitors planning to come to the country.