From an introductory price hike of 4.06 centavos/kWh of Feed In Tariff Allowance (FiT-All) in 2014, this subsidy scheme of guaranteed price for 20 years became 12.40 centavos/kWh in 2016. As more renewable energy power plants are added to the country, the cost of FiT-All will keep rising and it is safe to assume that this FiT-All might further rise to 20 centavos or more by 2017. And even consumers in Mindanao who are not participants of the Wholesale Electricity Spot Market (WESM) are paying for this.

Such is the abuse received by consumers nationwide via expensive electricity from subsidies to renewable energy (RE) companies. Last month, I wrote to the National Transmission Corporation (TransCo), a government corporation in charge of administering the FiT-All, and asked who among the RE developers received how much.

TransCo sent me a statement of cash flow, Receipts minus Disbursements = Fund Balance, and Fund Payable as of end-2015. I thanked them for the reply but that was not the information that I needed, so I called up the officer and asked why the list of who received how much was not sent. She said that they cannot release it to the public, implying confidentiality of the information. I wish that President Duterte will release that new Executive Order on Freedom of Information (FoI) very soon. The Department of Budget and Management (DBM) releases yearly data on how much government agencies received from taxpayers so why can’t TransCo release data on how much RE developers received from electricity consumers nationwide?

Last month, the Department of Energy (DoE) posted on its Web site the “List of Renewable Energy (RE) Plants with Certificate of Endorsement (CoE) to Energy Regulatory Commission (ERC) for Feed-in Tariff (FiT) Eligibility” as of June 20, 2016. My first question as to which RE companies received FiT has been answered. There are some RE developers who did not receive FiT.

By virtue of their enormity (MW capacity) compared to other RE developers, these companies are the potential main beneficiaries of expensive electricity policy provided by the RE Act of 2008 (RA 9513):

I only need to find out the answer to my second question: how much did other RE companies receive each? I went to the Energy Regulatory Commission (ERC) Web site and saw ERC Case No. 2015-216RC, the TransCo petition for FiT-All for 2016. The important factors and ingredients were there, so I began making my own estimates.

The FiT rates and installed capacity in MW for all RE developers already given by the DOE, I used the following factors and assumptions to construct a table of estimates.

a. Capacity factor -- derived using TransCo filings with ERC which are per technology basis.

b. Generation (MWh) -- derived from the capacity factor.

d. FiT Cost Recovery Revenue (FCRR) -- the amount that the RE firm got from WESM or the distribution utility (DU). This is derived using the average WESM rate per TransCo application to ERC. This amount may not be that accurate since the time of dispatch will not result to the average price.

e. FiT Differential (the basis of FiT-All) = FiT Revenue minus FCRR. For some power sources like wind plants, the calculated FiT Differential here may be under estimated since wind usually blows during off-peak hours period, and WESM prices are then below the average rate (see table). 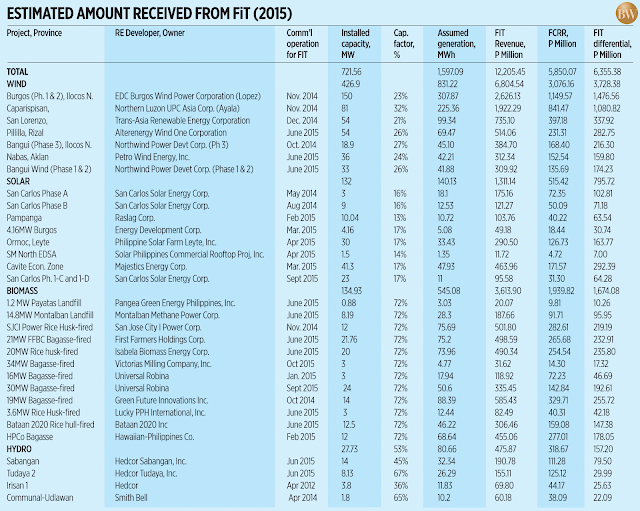 I wish to be corrected by TransCo if those numbers are wrong, perhaps they should release the correct numbers. Is it true that the Lopez and Ayala groups cornered nearly P5 billion from FiT in 2015 alone? The other companies like Trans-Asia/PHINMA, Alternergy, Hedcor/Aboitiz, they also enjoyed perks by several hundred millions of pesos each because of the unjust system of high, guaranteed price system under FiT.

On a related note, it is good that Mindanao does not have any of those expensive and pampered solar and wind plants that are primarily responsible for more expensive electricity in the country. Mindanao has more hydro, big hydro with no FiT and run of river hydro with small FiT of P5.90/kWh. Recently, Mindanao added more coal plants, which is the right thing to do. Stable, dispatchable, non-intermittent and cheaper coal power, that is what Mindanao and the rest of the country should have if we are to sustain fast growth. The move by the new DENR Secretary for anti-mining policy will adversely affect coal mining and coal power development in the country. This policy move should be checked and discontinued.

Bienvenido S. Oplas, Jr. is a Fellow of SEANET and Stratbase-ADRi, and head of Minimal Government Thinkers.
-------------