BWorld 73, Transco and the big beneficiaries of feed in tariff

The Philippines’ expensive electricity prices in Asia -- second only to Japan -- was highlighted once again in a paper by The Lantau Group (TLG) during the Asia Clean Energy Forum (ACEF) 2016 at the ADB last June.

Metro Manila’s residential electricity prices were even higher than those in Amsterdam, Hong Kong, and Singapore, twice than those of Hanoi and Beijing, and about three times than those of Taipei and Kuala Lumpur (see chart). 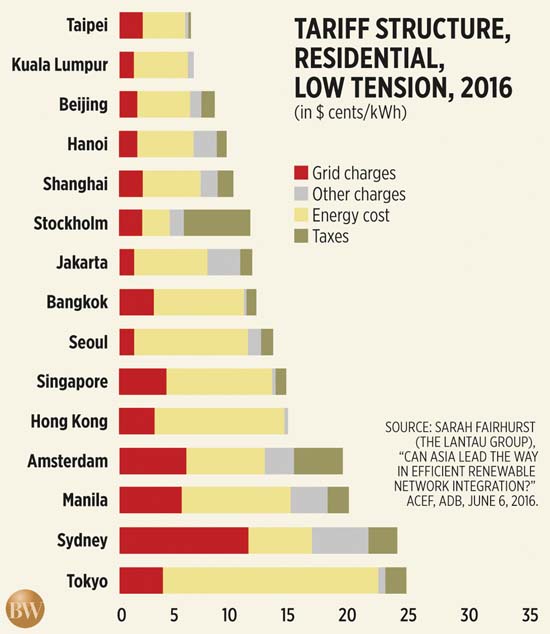 This will have negative consequences for the Philippines’ bid for industrialization. Many energy-intensive sectors and big foreign companies will put up their manufacturing plants in Vietnam, Thailand, Indonesia or Malaysia, where they enjoy cheaper and stable electricity there, then export these products to the Philippines at zero tariff because of the ASEAN Economic Community (AEC). So instead of attracting more manufacturing and higher-paying industrial jobs here, our neighboring countries will snap up those jobs instead.

The quick lesson from this reality is that we should find ways to further bring down the costs of electricity here. Identify those charges, costs, bureaucratic delays, taxes and royalties that contribute to our expensive electricity, and significantly shrink or abolish them.

Unfortunately, we are not moving towards that direction.

Instead we go the opposite, by creating new measures, new indirect taxes that contribute to even more expensive electricity via the feed in tariff (FiT) scheme for renewable energy (RE) companies, among others.

The FiT scheme as designed is very anomalous for three reasons, among others: (1) guaranteed price for 20 years, (2) initial price will be adjusted upwards yearly indexed to inflation, and (3) even consumers in Mindanao, who are not connected to the Visayas and Luzon grids, do not have Wholesale Electricity Spot Market (WESM), and suffer from frequent blackouts due to insufficient power supply for, pay for FiT.

Here are the adjusted FiT rates for 2016 and the corresponding FiT payments that electricity consumers must pay to RE companies via Transco. Wind 1 and 2 and Solar 1 and 2 refer to two tiers of FiT-eligible RE firms, the second tier is given lower rate in exchange for expanding the FiT-eligible new capacity addition (see Table 1). 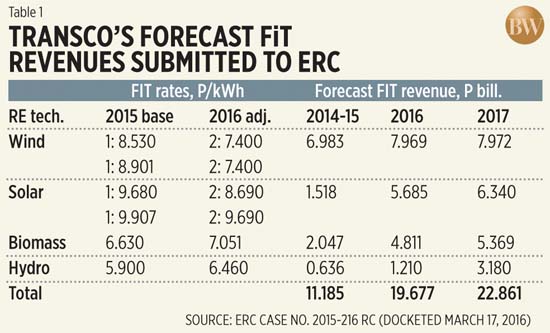 Last July 6, 2016, this column attempted to quantify how much the big RE companies have cornered the FiT revenues. The next day after it was published, I wrote to the National Transmission Corporation (Transco), a government corporation in charge of administering the FiT-All, and asked: (1) if my estimates of (a) P2.63 B for EDC Burgos, (b) P1.92 B for Caparispisan, (c) P0.73 B for San Lorenzo Trans Asia, etc. are correct; (2) if my estimate of P12.2 billion total FiT revenue for 2015 is correct; and (3) what are the correct numbers if those estimates are wrong.

I mentioned in my letter/e-mail that President Duterte will soon issue an EO for FoI since these are public funds collected from electricity consumers nationwide and administered by a public entity, Transco and hence, the numbers should be made public too.

Transco replied one week after and said the following:

2. My estimates of P12.2 B FiT-All for 2015 alone “are higher than the 2016 FiT-All Application levels of Transco on the basis of the following:

a. There are RE plants in the Application that have not billed Transco in 2015. Although their generation may be in 2015, these plants have not gotten the final eligibility for FiT in 2015 (processing on going). Thus, they will bill Transco only upon completion of all necessary approvals;

b. Transco also implements one month current-one month backlog billing consistent with the REPA (Renewable Energy Payment Agreement). Thus, there are plants that have gotten their FiT eligibility much later than their Commercial Operation Date (start date for FiT eligibility) and have not become current in terms of billing by the end of the December 2015 billing period;

c. Transco estimate of FiT Revenue for 2014-2015 is about P10 B. it added that although the year has passed, it has yet to accrue all amounts pertaining to 2014-2015 since the concerned REs have yet to receive their final eligibility documents/are yet to bill Transco; and

d. What has been actually billed to the FiT-All Fund for 2014-2015 energy generation is only around P8 billion.

Thank you Transco for the reply, which allows me to construct new estimates of FiT revenues per company (see Table 2). 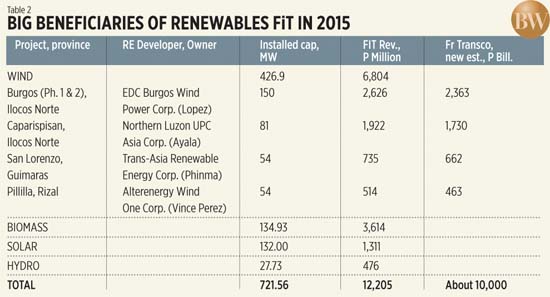 The 12.40 centavos/kWh FiT rate granted by ERC in February this year will soon be revised upwards because it was just a provisional order.

Forcing electricity consumers to pay more expensive electricity from new renewables is wrong. Consumer choice is compromised or killed. If people really believe that the new renewables’ costs are indeed falling and attaining grid parity with coal and natural gas, then they should support the abolition of RE law of 2008 or RA 9513. This way, RE developers can sell electricity to willing customers without any guilt or embarrassment.