Among the benefits of free trade, besides having tariffs as low as possible, if not zero, is higher income for the people. There are several ways by which this takes place.

First, free trade expands the choices and options of the local consumers and producers in the economy, both in prices and product quality. Thus, a rice farmer will have more choices where to get his new farm tractor, harvester, and fertilizer and this greatly expands his productivity while reducing crop wastes and losses. Competing suppliers from different countries will offer as low prices and/or better quality as possible to secure more buyers. 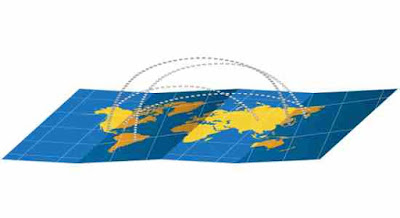 Second, free trade creates high levels of goodwill among other countries. Allowing them to export as much as they can at zero or very low tariff rates makes many of them to open up and liberalize their imports from that country or economy. Only goods that can affect public health and safety will be barred or subjected to heavy regulations. Thus, zero or low tariff for shoes, bags and computers but not for guns, bombs, canned food, or medicines with questionable or tainted quality.

Third, free trade invites more foreign visitors and tourists because some products that are heavily taxed and are expensive in their home countries can be found cheaply or abundantly in their destinations. As a result, airlines, hotels, restaurants, malls in the economy expands significantly. Thus, in the case of Hong Kong and Singapore, they import in thousands of containers and “export” in millions or billions of shopping bags when the tourists fly back home to their country.

Here is a sample of economies which have zero or low tariff at most favored nation (MFN) treatment. We will omit discussion about non-tariff barriers (NTBs) at the moment. Three small but dynamic Asian economies lead the pack and two non-EU members, Switzerland and Norway, have lower tariff than the EU average. The Philippines’s tariff rate would approximate the rate of co-members in the ASEAN except Singapore and Brunei. While ASEAN and EU countries have zero tariffs on their co-members in their economic bloc, they impose certain tariffs for other countries outside the bloc (see Table 1). 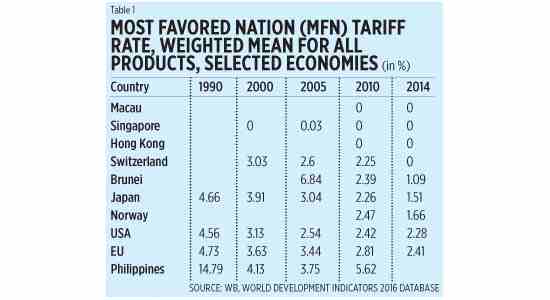 We now check the income of the countries listed above and added other ASEAN countries. Economies with zero or near zero tariff also have very high per capita income (See Table 2). 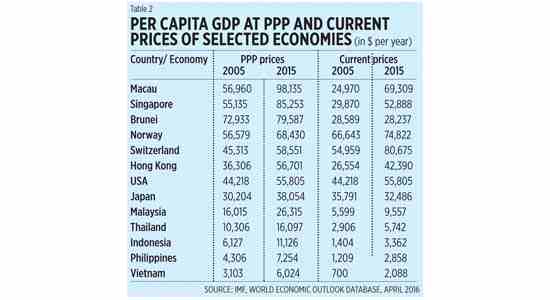 There are many other factors of course that explain for the high per capita income of those countries above, like having a rule of law and smaller population. Small population has forced them to open up to global trade via tariff liberalization, otherwise their small volume of consumers and producers will greatly restrict their capacity to expand their income and economic freedom.

The above are lessons for the Philippines and other countries show why pursuing free trade and unilateral liberalization towards zero tariff make a lot of sense. Expanding the economic freedom of their people to have more choices, more options where to buy and sell their various products and services is actually an end in itself.

Protectionism and nationalism are old philosophies that have served their purpose in the last century but will no longer work in the current century and beyond. Governments should learn to take a step back and ease regulation and taxation of trade.


Bienvenido S. Oplas, Jr. is the head of Minimal Government Thinkers and a Fellow of SEANET, both institutes are members of the Economic Freedom Network (EFN) Asia.
---------------