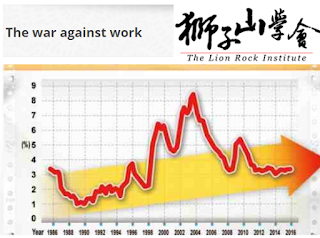 The war against work
Bill Stacey

When I first arrived in Hong Kong in 1989, I had the impression of an incredibly dynamic work environment. Unemployment was negligible and workers of all kinds were in demand. Employers constantly complained that they could not keep staff as they bounced from opportunity to opportunity. People not earning enough to get by might move to a new job, but might also take on a second job. There were still families that would take on piece work in the home for extra income.

All this has changed. The unemployment rate is now three times as high, but as this is only a fraction of the disaster caused by the sclerotic labor markets in many other countries, the government complacently pats itself on the back.

In reality, our labor market is increasingly stagnant and struggling to adapt to changes in the way people work and the structure of industry. A “war on work” is underway, which starting with an ideology that does not value work is prosecuted by union and academic foot soldiers who use the heavy artillery of legislative power to destroy jobs.

The first battle was over the Mandatory Provident Fund. Far from being a benefit for employees, the MPF confiscates some of their earnings and creates administrative complexity for employee and employer, leaving many a small business preferring not to take on the responsibility of employing anyone at all. Meanwhile, the MPFA’s empire-building mission has left our workers with little competitive choice to invest their hard earned retirement savings.

Minimum wage was the next attack. It was sold as protection for workers, but has simply served to eliminate jobs for less competitive workers and reduce opportunities for the young to get a step on the ladder of opportunity. It is not so much that opportunities are not available, but that small and entrepreneurial companies that offer more excitement than money can no longer get started. Minimum wage laws mandate unemployment for those whose labor is less productive.

Working hours are the new front. Although the government has dragged the process of review and consultations, we are moving toward legislation that requires overtime payments for work beyond an arbitrary number of hours. There is nothing wrong with contractual overtime payments, which can be a valuable incentive. However, the proposed government rules dramatically reduce flexibility. They require employers to keep detailed records of hours worked and make more difficult arrangements like working from home, where hours cannot be monitored. Standard working hours make life tougher for working mums, people combining work and study, and those who want flexible work arrangements.

These are new rules, but old prohibitions on work are being enforced with typical bureaucratic diligence. Occupational licensing is an old scourge protecting vested interests from competition. Who knew, until this week when we learned that a widow was prohibited from taking up her late husband’s shoe shining license, that you needed a licence to polish shoes? Every rule like this shuts down a job and an opportunity. Too many big companies are content to go along with more stringent workplace rules. If it is more expensive to hire workers and create new businesses, then there is less competition.

It is not just government that is undermining work and opportunity. The blithe indifference of some so-called localists to reducing tourists impacts job opportunities and undermines our community. There are ivory tower academics and dreamy futurists that envision a world without traditional work, where we are all guaranteed a taxpayer-financed “living wage”, and traditional work is all done by robots with artificial intelligence. This is a future without the personal autonomy and freedom that most of us want. It imposes on the working few the burden to pay for an idle many. Yet that is the future our government will create if it does not end its war on work and enterprise.
-------------