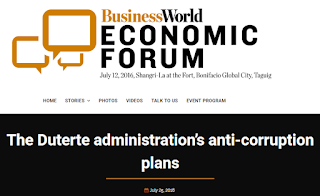 * This is my article in BusinessWorld Special Anniversary issue last Monday.
---------


Corruption takes place when a person has the power to dispense certain actions or render services that other parties needs. Voters who sell their ballots in exchange for money and politicians buying them are both engaged in electoral corruption. Similarly, procurement officers who favor certain suppliers even if others can offer the same products or services at lower prices are also committing corruption.

Elevate the scene to a city or country level, and we can see or suspect large-scale corruption in various levels. Like a cabinet secretary favoring a particular supplier of construction materials and equipment, or arms and soldier uniforms, or school buildings and textbooks, or hospital equipment and medicines, even if other suppliers can deliver those goods and services at a lower price and/or better quality, corruption occurs.

To reduce or eliminate corruption, the process of procurement and signing of contracts should be made as transparent as possible. And the possibility of prosecution and imprisonment for wrongdoing should also be made as certain as possible. Because while the punishment can be as severe like the death penalty but if the chance of being caught and prosecuted is very small, then people will remain corrupt.

During the BusinessWorld Economic Forum last July 12, 2016, Department of Finace (DoF) Secretary Carlos G. Dominguez III outlined some important anti-corruption measures of the Duterte administration. Among these are the following:

1. Reduce income tax (personal and corporate), raise the income tax exemption, all in at P1 million a year. This will reduce corruption in the payment and collection of income taxes, broaden the tax base and hence, can actually raise revenues overall.

2. Rationalize import permit papers, reduce the number of signatures, conduct random audit of shipments, and undertake certain processes outside Manila ports. This will reduce corruption at the Bureau of Customs (BoC).

3. Accelerate the Run After the Tax Evaders (RATE), Run After the Smugglers (RATS), and Revenue Integrity Protection Service (RIPS) programs of the DoF. Undersecretary Gil Beltran was appointed as the anti-red tape czar of the Department tasked to cut the transaction processes at the BIR, BoC, and other agencies under the DoF.

4. Maintain transparency in all dealings — the Executive Order (EO) on Freedom of Information (FoI) that will cover the Executive Department will be signed very soon. This will encourage zero tolerance for corruption.

There are other proposals and programs to reduce corruption at the DoF and other agencies, but the above were highlighted in his speech that day.

These are good proposals. Few permits and bureaucratic signatures can lead to a leaner and smaller government. Instead of 8 or 10 directors in one bureau that require 8 or 10 signatures, make it 4 or 5 and the transaction procedures will significantly improve. The number of officials and their offices will also decline and hence, the need for taxes and fees to keep them going will also be reduced. If people have more money in their pockets because government taxation and mandatory fees have declined, that is already one form of public service. Concrete, down to earth public service.

The extent of corruption in the Philippines is captured in various international reports and studies that are reported annually. One such important report is Transparency International’s (TI) Corruption Perception Index (CPI). TI interviews thousands of expats in many countries worldwide and see their perception of corruption or absence of it in the countries where they do business.

Other selected reports are also included in a separate table by TI. For this piece, four of such reports are included in the table below. These are the (a) World Economic Forum’s (WEF) Executive Opinion Survey (EOS), (b) World Justice Project’s (WJP) Rule of Law Index (RLI), (c) Economist Intelligence Unit (EIU), and (d) IHS Global Insights (GI).

I am hoping that reforms initiated by the DoF and other departments of the Duterte administration will be implemented and sustained for the next six years. There will be significant improvement in the country’s corruption perception and reduction in actual practices of corruption in many government agencies, from local to national, and from the Executive to the Legislative and Judiciary.

Transparent and lean government is good. It will be beneficial for businesses and taxpayers and good for the officials and ordinary personnel in government. Trust and respect for both sides will also improve.