Another nice commentary from a friend, Dr. Josef "Jop" Yap, former President of  the PH Institute for Development  Studies (PIDS) and now a UPSE faculty member. He gave me permission to post this. 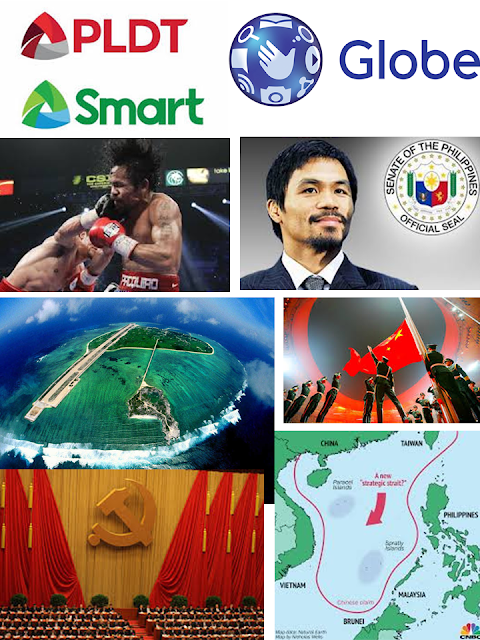 The Wealthy and Popular are Above the Law

Two noteworthy events made the news today. The first is the decision by PLDT and Globe to sue the Philippine Competition Commission because of its decision to review the deal between the two telecommunication companies and San Miguel Corporation. The second event is the announcement by Bob Arum that Manny Pacquiao is going to return to the ring later this year.

Both these events show how easy it is for the rich and powerful (and popular) to show disdain for the laws of the country.

Rather than wait for the outcome of the review, the two giant telcos decided to question the legitimacy of the PCC’s authority. There is of course the issue of whether PCC’s legal mandate started before or after its Implementing Rules and Regulations were approved and implemented. But given this gray area, the telcos should have granted the institution proper respect by waiting for the results of the review. After all, if they are confident the deal is above board, they have no reason to be concerned. An imprimatur from the PCC would have only provided more credibility to the transaction.

As it stands, the action of the telcos will cast doubt on the validity of the deal. Even if the courts will side with them—and given the reputation of our legal system, it is likely they will— the PCC will still have the authority to evaluate the degree of competition in the market. If it is deemed that the existing structure is detrimental to consumer welfare, the PCC can impose appropriate measures to correct the situation. It is not farfetched that one measure would be to invalidate the deal with San Miguel.

But what the telcos have done is set the stage for transferring authority from the PCC to the courts. If the telcos prevail in this particular issue, the PCC’s authority will likely be dissipated.  This is an acid test for the future of competition in the Philippine economy.

As for Manny Pacquiao, it was bad enough he neglected his duties as Congressman. Taking a leave from the Senate in order to fight again only makes the situation much worse. Many argue that he is entitled to this privilege because he brings honor to the country. This makes one wonder if this is a legitimate reason to commit a crime. “Your honor, Juan de la Cruz, did murder his wife in cold blood but he should be exonerated because he won the Philippines’ first gold medal at the 2016 Rio Olympics.” Can this really be a valid line of defense? But this is not new in our country. The most recent prominent example is granting bail to Juan Ponce Enrile because of humanitarian reasons, which should not even be possible in the country’s legal framework.

We have argued before that it is not corruption that has been the number one malady in the Philippines. It has always been injustice. These two events show unjust our legal system and society has been.

But wait! There is good news! The Philippines just won the arbitration case against China. Justice after all exists in the world. But despite the cause for celebration, a thought keeps nagging at me. The Chinese have a proverb: “We are a peaceful people, but if someone hits us, we will hit back harder.” Could the massive reclamation projects have been triggered by the filing of the arbitration case? If—and this is a big IF—this is the reality, then the victory of the Philippines is a Pyrrhic one.
-----------